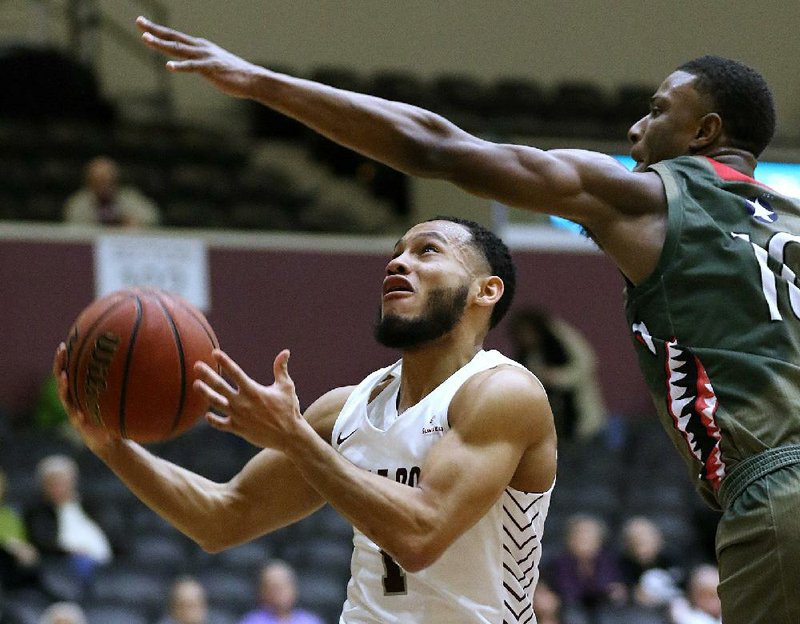 Even during a rugged first season as head coach at the University of Arkansas at Little Rock, Darrell Walker remained supremely confident that the losing would be temporary, and that a turnaround would come -- and quickly.

He suffered through defeat after defeat during the 2018-19 campaign as the Trojans closed the year on a six-game losing skid.

Walker was mostly unbothered, despite a 10-21 mark that included a tied-for-last finish in the Sun Belt Conference at 5-13. The Arkansas Razorback great and former NBA champion believed his team was one offseason overhaul away from not just being competitive, but becoming a winner. 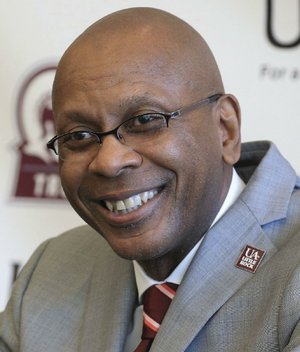 "It was a learning process," Walker told the Arkansas Democrat-Gazette. "As I went through the Sun Belt Conference, I said to myself, 'We're gonna do some recruiting, we're gonna add some more pieces, we're gonna win some games next year ... we're gonna try to win this conference.' "

A year later, Walker doesn't have to convince anybody after one of the biggest turnarounds in college basketball this season.

He said he already has moved on to 2020-21, but he still goes into the office daily to break down tape from each game this past season to "see if I can learn something again." It's also an attempt to stay busy while the sports world is shut down amid the coronavirus outbreak.

The Trojans flipped their record from last season, finishing 21-10 while winning the Sun Belt regular-season championship for the first time since ex-coach Chris Beard's title run in 2015-16.

How improbable was it all? Some of Walker's own players admittedly weren't sure they could be champions this season.

"I didn't know how we would gel together," sophomore point guard Markquis Nowell said earlier this month. "I didn't see all of this happening."

Walker -- who had coached many years in the NBA but never in college prior to 2016 -- was awarded Sun Belt coach of the year honors, and the Trojans landed three members of its starting five on all-conference teams.

The rippling effects of the coronavirus spread caused a sudden end to UALR's season, before the team could get down to New Orleans to play for a berth in the NCAA Tournament.

Walker may not have had the opportunity like Beard -- who's now at Texas Tech and the nation's fifth-highest paid coach -- to showcase his program on the grand stage that is March Madness, but he's dead set on sticking around much longer to build a consistent winner. 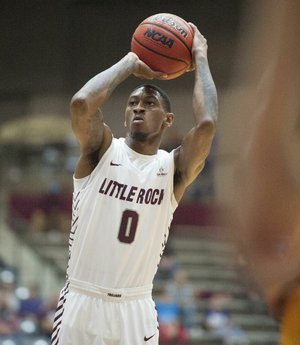 UALR guard Ben Coupet Jr. (0) had a hand in helping the University of Arkansas at Little Rock’s men’s basketball team complete one of the biggest turnarounds in college basketball this season. The Trojans flipped their record from the previous season, finishing 21-10 while winning the Sun Belt Conference regular-season championship. (Arkansas Democrat-Gazette file photo)

Walker said during his Jan. 21 appearance at the Downtown Tip Off Club in North Little Rock that he felt this job was "home," expressing he wanted to be here for 10 years. He told the Democrat-Gazette last week that he's "happy" at UALR and "in front of family and friends," and that no one has reached out to him personally about another coaching job.

A strong recruiting effort laid the foundation for where the Trojans are now.

Walker believed his roster needed more length and size. He received both with the additions of 6-10 junior forward Ruot Monyyong and 7-0 junior center Admir Besovic, both of whom were junior-college transfers. 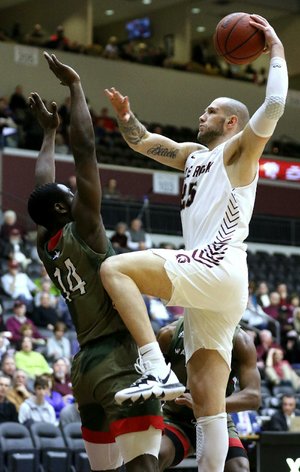 Photo by Thomas Metthe
UALR's Nikola Maric (25) Nikola Maric (below) had a hand in helping the University of Arkansas at Little Rock’s men’s basketball team complete one of the biggest turnarounds in college basketball this season. The Trojans flipped their record from the previous season, finishing 21-10 while winning the Sun Belt Conference regular-season championship. (Arkansas Democrat-Gazette/Thomas Metthe)

Walker had depth, which he lacked the previous season. That proved critical when Maric and Lukic missed the first 16 games because of NCAA suspensions, and Bankston and Evans combined to play five games because of injuries.

The Trojans did more than stay afloat, racing to an 11-5 mark and 5-0 Sun Belt start by the time Maric and Lukic returned Jan. 9.

Nowell, who also missed a few games with a hamstring injury, was UALR's guiding force offensively, averaging 17.2 ppg, which tied for third in the Sun Belt, and 4.9 apg, which ranked second. He also led the league in both three-point percentage (39.1%) and free-throw percentage (87.9%).

Monyyong transformed into a double-double machine and became both the Sun Belt's newcomer and defensive player of the year, leading the league in rebounding and blocked shots. He averaged 11.9 ppg and 9.8 rpg. He tallied 16 double-doubles, which ranked tied for 17th nationally. Both Nowell and Monyyong were first-team All-Sun Belt selections.

Aside from Lottie, who is transferring, each of the core pieces -- as well as Bankston, Evans, Palermo and Besovic -- are expected to return, setting up for another deep, but more experienced, team next season.

When the preseason predictions are released, the Trojans are more likley to be closer to first than 11th, which is where they were picked this season. 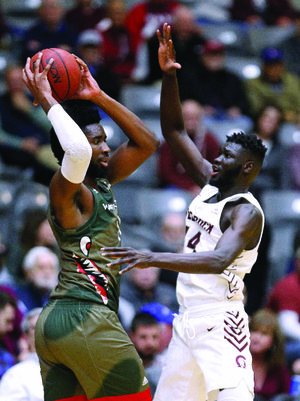 Photo by Thomas Metthe
Ruot Monyyong (right) of UALR averaged 11.9 points and 9.8 re- bounds per game for the Trojans. He was named defensive player of the year and newcomer of the year in the Sun Belt Conference. (Arkansas Democrat-Gazette/Thomas Metthe)

"It should make practice a lot easier, because those guys know the system and know what we're gonna do offensively and ... defensively," Walker said. "It's gonna be a challenge, too, because at the end of the day, we're probably not gonna be picked 11th. I wish we would get picked 11th, but we're not gonna get picked 11th. We're gonna probably be in the top three, and you're gonna have a big bull's-eye on your back.

"We're gonna see how this team responds to getting everybody's best effort every night at a higher level now."