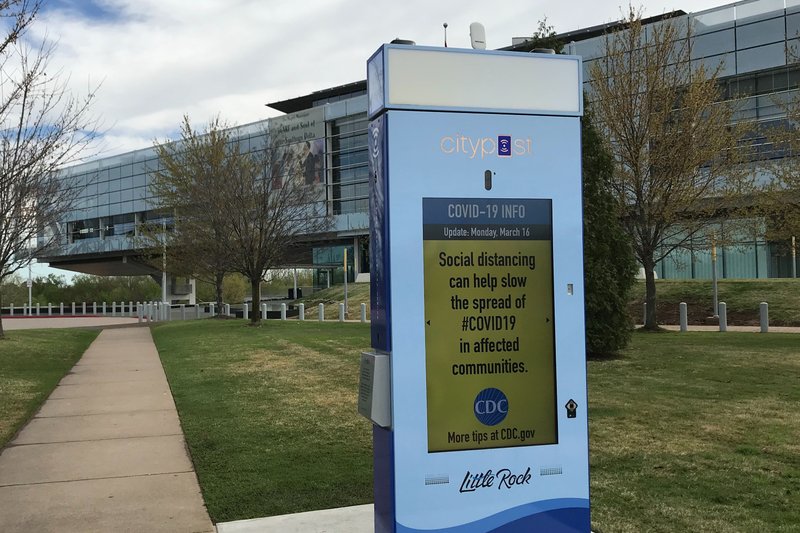 More than 560 people in Arkansas have now been confirmed to have covid-19, the Arkansas Department of Health said Tuesday evening.

Figures on the agency's website shortly after 6:30 p.m. show there are 564 known coronavirus cases within the state.

Earlier Tuesday, officials announced that an eighth person had died from the virus.

The latest Health Department figures show 41 people have recovered in the state while 6,869 people who have been tested were found not to have the virus.

Arkansas Gov. Asa Hutchinson said Tuesday he is making a major disaster declaration for the state, a status that would provide more federal funding and resources for the coronavirus crisis if approved.

Hutchinson made the announcement at his daily press briefing on the latest on covid-19 in Arkansas, during which he also said an eighth person has died from the illness in the state and raised concerns about out-of-state visitors spreading the virus at state and national parks.

The Democrat-Gazette reported previously that the largest Buffalo National River resort has closed for a month over concerns of overcrowding amid the pandemic. A Change.org petition with more than 3,400 signatures by Tuesday afternoon urged Hutchinson to "stop telling people to visit, and to stop crowding the river and parks in a feeble attempt at social distancing."

At the briefing, the governor said he is concerned visitors from outside Arkansas are coming to state and national parks and spreading the virus. He said he and Parks, Heritage, and Tourism Secretary Stacy Hurst are working on plans to possibly close the most popular parks in hopes of deterring such visitors.

He said he would not name which parks may be closed before Hurst makes recommendations to him.

Hutchinson also said there are no current plans to set up checkpoints on roads at the state's borders, in part because many people need to travel between Arkansas and nearby states for business reasons.

Also Tuesday, the Health Department reported 35 people have recovered from the illness so far. Smith said if someone has been ill with the virus but not sick enough to be in the hospital, they can return to work as soon as seven days after the onset of symptoms so long as they’ve been without a fever for at least three days. 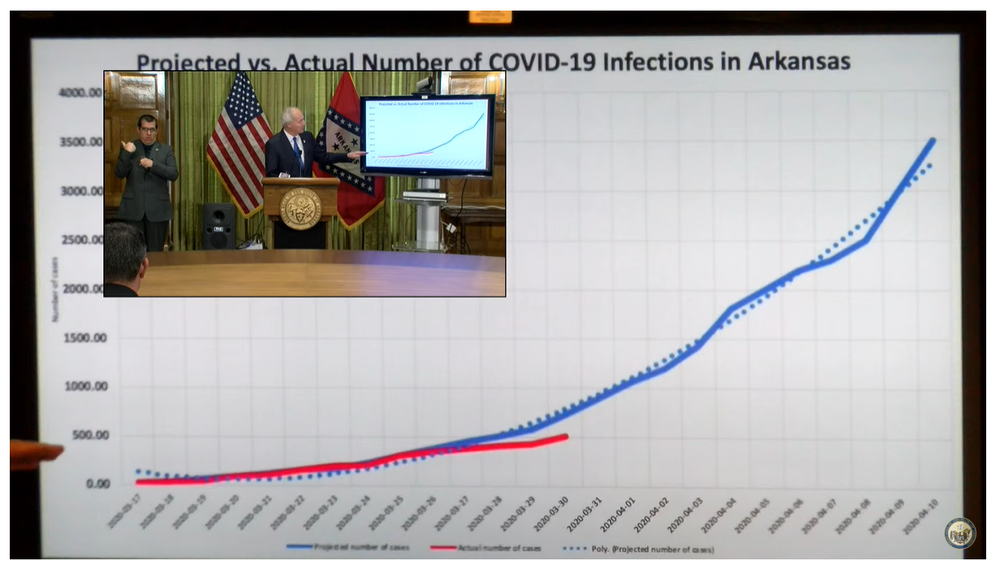 Gov. Asa Hutchinson shows a graph during a news conference on Tuesday.

An additional person has died of covid-19, Gov. Asa Hutchinson said Tuesday at a news conference where he also announced the number of cases is rising slower than expected.

The total number of cases rose to 523, Hutchinson said, and the additional death brought the toll in the state to eight.

Hutchinson said last week the state could see 3,500 cases by mid-April. On Tuesday, he said the actual number of cases is rising slower than expected, and if the number of cases continues on its current trajectory, fewer than 3,500 cases would be expected by April 10.

[Video not showing up above? Click here to view » https://www.youtube.com/watch?v=kqjcZQwx8aQ]

Hutchinson said this proves the efficacy of social distancing and the other measures Arkansans have taken to limit the spread of covid-19.

Smith said 64 patients are hospitalized, including 23 on ventilators.