Official: Cadets would have returned before assignments by LOLITA C. BALDOR The Associated Press | May 1, 2020 at 4:21 a.m. 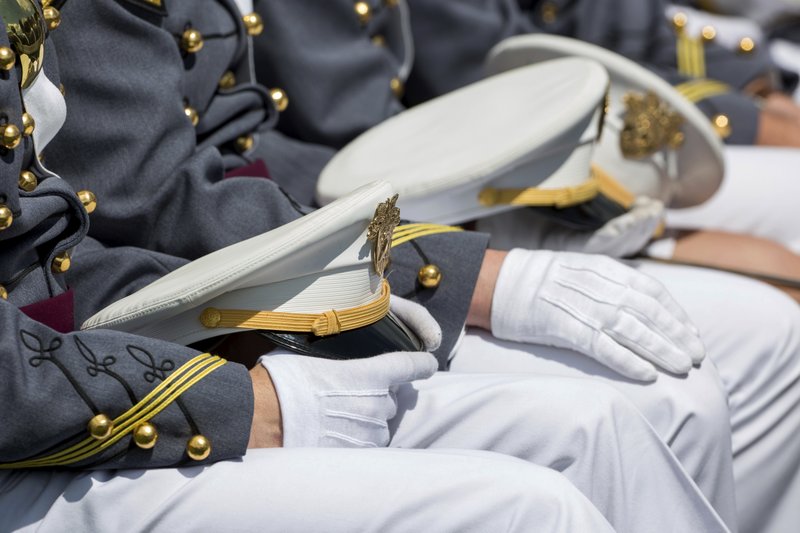 FILE - In this May 25, 2019, file photo West Point cadets hold their caps on their laps during graduation ceremonies at the United States Military Academy in West Point, N.Y. The Army's top leaders on Thursday, April 30, 2020, defended their decision to bring 1,000 cadets back to the Military Academy at West Point for graduation, where President Donald Trump is slated to speak, saying that despite the coronovirus risk students would have had to return anyway to prepare for their next duty assignment. (AP Photo/Julius Constantine Motal, File)

WASHINGTON -- The Army's top leaders Thursday defended their decision to bring 1,000 cadets back to the Military Academy at West Point for graduation, where President Donald Trump is scheduled to speak, saying that despite the coronavirus risk students would have had to return anyway to prepare for their next duty assignment.

The announcement has been criticized as a political move to get Trump on stage at the academy, where he hasn't yet given a graduation address. But Army officials said the students must return for final medical checks, equipment and training.

"We can't telecommute to combat," Gen. James McConville, the chief of staff of the Army, told Pentagon reporters when asked about the decision, which causes cadets spread out across the U.S. to travel, risking exposure on public transportation, and then land in New York, a coronavirus hot spot.

Cadets have been home since spring break in March, with their return to school delayed because of the outbreak. Only the seniors will return, and the graduation is set for June 13.

Lt. Gen. Darryl Williams, academy superintendent, said the students must return for medical and other required tasks that can only be done at the academy before they can be turned over as new officers to the Army.

He said the school will create a "safety bubble" around the cadets and build a staging base where they will arrive. All cadets will be screened and tested for the virus at the staging area and then separated into five groups that will eat and live separately. They will be quarantined for 14 days.

Williams said Keller Army Community Hospital at the base now has all the needed testing equipment, and was converted to be able to handle and quarantine virus patients.

Asked if cadets will face discipline if they can't or don't want to come back because of the virus, he said commanders will decide on a case-by-case basis.

[Video not showing up above? Click here to watch » https://www.youtube.com/watch?v=HEZqOv6Az68]

U.S. Sen. Tammy Duckworth, D-Ill., a member of West Point's Board of Visitors, said she expressed her concerns about the decision to Army Secretary Ryan McCarthy in a call this week.

"Trump's reckless decision to gather 1,000 Cadets at West Point for a speech puts our future military leaders at increased risk -- all to stroke his own ego," said Duckworth, a retired Army helicopter pilot, who served in the Iraq war and received a Purple Heart.

McCarthy told reporters the Army wants to have a "small, safe graduation ceremony" for the cadets to celebrate.

In contrast, the U.S. Naval Academy has announced it will hold a virtual graduation and postpone other traditional milestone events until large-scale gatherings are allowed. The academy's superintendent, Vice Adm. Sean Buck, called it a difficult decision but necessary "to safeguard the health and welfare of the entire Naval Academy family and local community."

The U.S. Air Force Academy opted to hold a scaled-down ceremony with hundreds of graduating cadets sitting in chairs eight feet apart on the school's parade field, instead of in its stadium. The ceremony was closed to visitors.

West Point's graduation ceremonies are usually held in May in a football stadium.