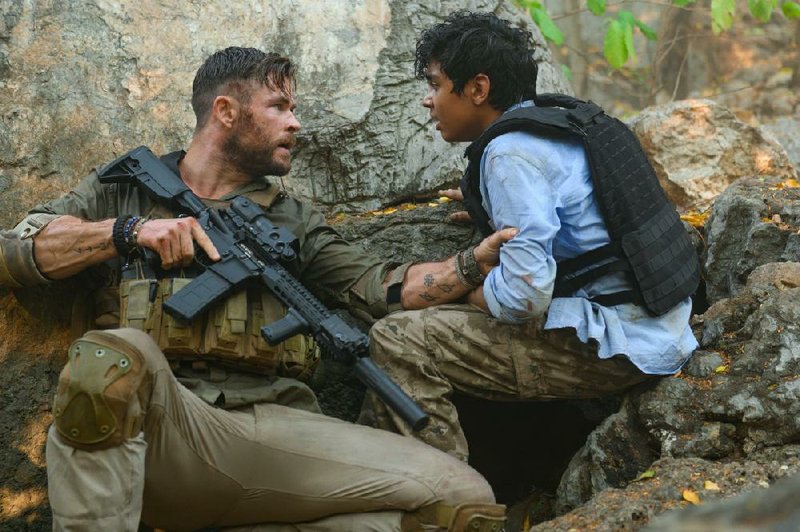 Chris Hemsworth, the Hemsworth who plays Thor, is called on to rescue the son of a crime lord (Rudhraksh Jaiswal) in the Netflix action film Extraction.

Oh, hey, look. Thor is in a new action movie. That's the first thought I had when I saw advertisements for Netflix's new action flick Extraction. The ads followed me on Twitter mostly. And how could I not think of Thor? The advertisements mentioned the Russo brothers, who directed Avengers: Infinity War and Endgame.

So yeah, my mind went to Thor. The trailers for Extraction didn't exactly get me excited. Lately, it takes a higher caliber of action flick to really excite me. I'm not a huge Fast and Furious fan, but I do love the Mission: Impossible series (minus the third one) and the John Wick movies.

I avoided the Olympus Has Fallen sequels like the plague. I didn't have any interest in Gemini Man (and that one even offered me Will Smith). I'll confess to watching Stuber, but only because the trailer was so funny. And surprisingly, I didn't regret watching that movie.

But to lure me into an action movie, I really need something more than explosions and gunfights. John Wick has Keanu Reeves (who is completely justified in any and all murder because his dog was killed). The 007 films usually have good writing, directing, and, of course, the allure of James Bond, one of the greatest spies of all time.

Extraction didn't have much to lure me in with, initially. I like Thor well enough, but I'm not going to run out and watch everything Chris Hemsworth stars in. I wouldn't do that for any of the Avengers. I learned my lesson after watching Robert Downey Jr. in 2014's The Judge.

The movie's premise is pretty much given away in the title. I know it's an action movie, and someone (probably a child) is going to need extraction from a dangerous situation. The person doing the extracting will be a numb bloodthirsty mercenary with a tragic past who does drugs and/or drinks a lot to deal with the guilt over said tragic past. It's a tired trope.

Of course, then I realized movie releases are few and far between thanks to the ongoing plague. So I freed up an evening, fixed some hash browns, cut some watermelon (running low on groceries), and sat down to watch the movie.

I got exactly what I predicted two paragraphs up. Extraction is a by-the-numbers action movie. But I do have a couple good things to say about it.

The story follows a student named Ovi Mahajan (Rudhraksh Jaiswal) as he's kidnapped by a crime lord. Mahajan is, himself, the son of another crime lord. He's being held to humiliate his father. Chris Hemsworth plays a mercenary named Tyler Rake who is hired to rescue Mahajan. Most of the movie takes place in Dhaka, Bangladesh, which, of course, becomes a war zone as Hemsworth tries to rescue the helpless teen.

Strangely enough, the best thing Extraction has going for it is the camera work. It's just fantastic. Most action movies have a lot of cuts in fight and chase scenes that can make said scenes jumbled messes. The viewer is often left with cinematic whiplash wondering what the hell is happening.

But to Extraction's credit, the action is well executed and clear. I never found myself wondering what was happening to hammerless Thor, who was shooting at him or who he was shooting at.

Where this talent really shines is early on in the movie, during a long chase scene where Rake all but throws Mahajan into a car and tries to escape, not only police, but another deadly gunman. My wife and I marveled throughout the entire chase, which, I swear on my stuffed Vulpix, seemed like one long take. I couldn't pick out any cuts throughout the chase.

Another solid point in the movie's favor is the stunt work. From car crashes to fight scenes, the behind-the-scenes folks really nailed it throughout Extraction.

Rake isn't a really well-developed character. There's not much to him aside from shooting guns and occasionally stabbing people. He's not a bad action star. He's merely serviceable, is all I'm saying. The most iconic action stars have something that sets them above generic. Bruce Willis in Die Hard had all these memorable lines and zaniness to go with his action. Tom Cruise has crazy stunt work in Mission: Impossible. Sean Connery had the swagger, zingers, and puns.

But Hemsworth doesn't really bring much additional to the table. I know he can cry on cue. I know he can act like he drinks a lot and pops pills. He looks cool shooting a gun and throwing grenades (which were plentiful in this movie, I might add), but ... there's not anything that stands out about his role.

And looking back at his role in the MCU, is that really a surprise? When is Thor at his best in those movies? When he has someone else to play off of, be it Loki, Rocket Racoon, Starlord, etc. But when he's alone, Thor is a little dull. Don't believe me? Ask yourself, what's the most boring Marvel film? Answer: Thor: The Dark World. The only Marvel movie worse is Iron Man 3.

Someone like Robert Downey Jr. is perfectly capable of holding a scene on his own. We love Iron Man because he's a cocky, brilliant inventor with enough sarcasm to sink a ship. Thor? He's like Jack Sparrow, best as a complete set, not alone.

Jaiswal does a good job playing a kidnapped teenager who is going to need hours and hours of therapy after everything is said and done. I watched all that this kid endures, just wanting to go home, and found myself muttering, "This poor kid," over and over.

We're made to believe the two crime lords have this whole history with each other, but it's not something that's ever shown. It makes the bad guys look really generic. You know how you can tell who to root against in the movie? Just whoever is shooting at Hemsworth, be it an endless supply of soldiers and cops (which the movie does a poor job of distinguishing) or a random military colonel that works for Asif.

The movie's runtime comes a little too close to two hours when it should have probably been kept at 90 minutes tops. The story is thin, and some of the action sequences at the end of the film are a little too long. David Harbour's role in the movie just seems like extra padding to make the movie look longer. He's not bad, just pointless, far as I can tell.

My final nitpick with this movie is the gutless ending that's left purposely vague because, and I kid you not, test audiences were reportedly 50/50 split on how they wanted the movie to end. So the filmmakers decided to leave the last scene purposely vague, which is so lukewarm, it might as well be a church in Laodicea. I'm a fan of writers and directors sticking with their vision and following through, even if the result is somewhat less than spectacular.

I can remember in high school band class, our conductor always taught us that if you're going to be wrong, be wrong at the top of your lungs. Or as Dr. Cox says, "Commit. C-O-M-M-I-T-T-T-T-T-T-T."

Extraction is not a bad movie. It's an OK action flick that I just wish would have tried a little harder to be more creative. I doubt I'll remember it two months from now. But hey, you're in a pandemic, likely trapped at home. You could do a lot worse in the entertainment department than turning this movie on... like rewatching 2007's Sublime or Alien 3.