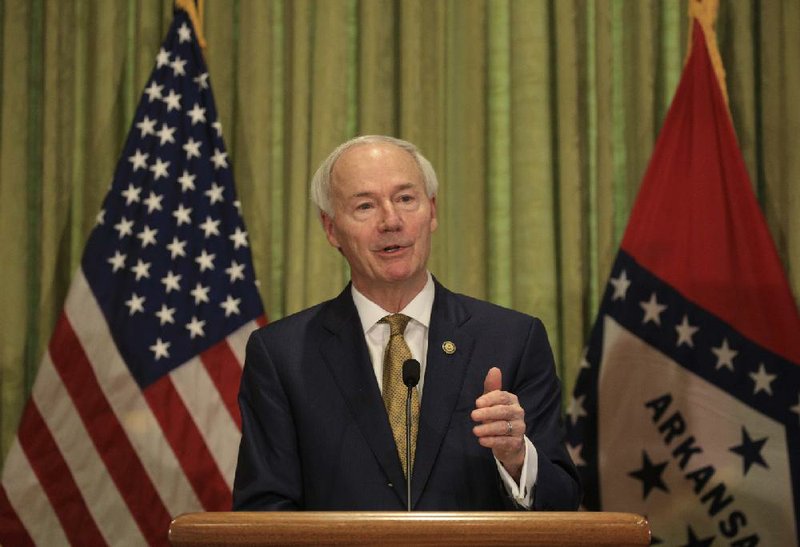 Arkansas fitness clubs will be able to reopen Monday under rules requiring customers to wear masks when not exercising and stay at least 12 feet from other people when they are, Gov. Asa Hutchinson announced Thursday.

Those requirements were the latest set of rules issued to govern businesses during the first phase of the state's easing of restrictions that were imposed to slow the spread of the coronavirus.

While public-health officials usually advise keeping a distance of at least 6 feet from other people while in public, Hutchinson said the need for distance while exercising is greater.

"As you're exercising, you're exhaling to a greater extent and so the typical breathing goes beyond the 6 feet, and so we want a little extra protective measures there," he said.

Team and youth sports will still be prohibited, but an announcement will be made later this month on what might be allowed this summer, he said.

The Republican governor, who regularly played basketball before the pandemic, said, "That was probably the topic of the longest conversation" he had with state Health Secretary Nate Smith on the new rules.

"The fact is that team sports are not permitted under these guidelines, and for some clear reasons that Dr. Smith explained to me," Hutchinson said. "With a basketball, when you pass a basketball, you can actually be passing along the virus."

Gym owners and managers said they were expecting the governor's announcement, but some still had work to do to prepare for Monday's opening.

[Video not showing up above? Click here to watch » https://www.youtube.com/watch?v=Mzzg1OaMTuI]

The 12-foot distancing rule was the one restriction that worried them the most.

"We're going to go ahead and open up, but we still have a lot to figure out," said Bobbie Boyce, a manager at Beebe Athletic Club.

"We're not quite sure how to [manage] with all those restrictions. We're not sure how many customers we can have in the gym at one time. Everything is still kind of up in the air."

The rules were issued as the state's death toll from the virus rose by two, to 61, and the number of cases in the state's official tally rose by 74, to 3,281.

That total does not yet include all the results from an outbreak at the Cummins Unit in Lincoln County, where infections have been identified among 860 inmates and 51 staff members.

No new cases had been found at the prison on Thursday, but the number of inmates who were hospitalized increased from 11 to 13, Smith said. Three of the hospitalized inmates were on ventilators, the same number as a day earlier, he said.

At the federal prison in Forrest City, the number of inmates who have tested positive increased by 14, to 101, he said.

The rules issued by the state Department of Health require fitness centers to screen staff members and customers for symptoms and possible exposure to the coronavirus.

That includes asking whether the person has within the past two weeks been overseas or to New York, New Jersey, Connecticut or New Orleans or had contact with someone known to be infected with the virus.

Symptoms include a fever of 100.4 degrees or more in the past two days or a cough, difficulty breathing, sore throat or loss of taste or smell.

Staff members also must have their temperatures checked with a digital thermometer before entering the facility.

Staff members or customers with compromised immune systems or chronic diseases also must be barred entry, according to the rules.

Inside the facility, staff members "should wear a face covering or mask at all times," and customers should wear masks when not exercising.

When exercising, customers should be at least 12 feet apart.

The use of swimming pools, showers and saunas still are prohibited and locker rooms should only be used for storing personal items.

Smith said pools "tend to be a place where individuals, especially children, tend to clump together quite a bit" and also require the use of showers, which are also "areas where people can congregate and can be a place where covid-19 can spread."

Indoor entertainment venues, such as bowling alleys and trampoline parks, will remain closed for now.

Stacey Reynolds, owner of Blue Yoga Nyla in Little Rock, said she was grateful for the opportunity to reopen her business but still processing the news on Thursday afternoon.

"We still have to figure out how to create that 12-foot space between the clients," she said. "There are a lot of logistics to figure out. It may take a few extra days. ... It's a lot to consider."

Safety was a top concern.

"We have a variety of people who practice at [the studio]," she said. "We serve a lot of very senior adults. We have to be safe about this. It's absolutely the most important thing."

Sal Passalaqua, owner of Cyclebar Rock City, was waiting Thursday afternoon to consult with his general manager to see whether it would be feasible to open Monday with the 12-foot distancing rule.

As a means to keep revenue flowing, Passalaqua had rented out some of the gym's stationary bikes so that customers could take virtual spin classes from home.

"I still have to see if it's worth opening back up," he said. "We've got to measure it out."

Marietta McClure, owner of McClure Fitness in Benton, said she was relieved to hear Hutchinson's announcement.

The club opened to outdoor classes a couple of weeks ago after the Health Department clarified that such classes were allowed. But a nine-person limit imposed by the department resulted in a trickling revenue stream, she said.

"You can't really pay your bills that way," McClure said. "We're excited about this. We realize there will be some who are still cautious and nervous and will stay home, but we're glad to be able to offer services again to those who are ready to return."

Aerobics and other classes will provide about 150 feet of space for each participant.

The clubs also will station "health guards" to help customers wipe down equipment between uses and make sure they keep a safe distance from one another.

"We're excited to get back to life as sort of normal as possible," she said at Hutchinson's news conference on the pandemic.

A member of Hutchinson's economic recovery task force as well as the University of Arkansas System board of trustees, she said the club has kept most of its nearly 7,000 members despite Hutchinson's order on March 19 requiring gyms to close.

The business laid off about 60 of its nearly 500 employees but was able to rehire most of them with a loan from the federal Small Business Administration's Paycheck Protection Program, she said.

She said the clubs have a large number of members who swim and take water aerobics, and she's looking forward to a future phase of eased restrictions allowing the pools to reopen.

"Until then, we'll make do with the requirements as they are," she said "I'm just happy we're back to business."

For many clients, "this is important psychologically as well as physically," she said.

"This is their social life -- coming to the club and seeing their friends," she said. "People who prioritize a healthy lifestyle should be able to resume those activities, and we're looking forward to allowing that."

Hutchinson acknowledged the 12-foot distance requirement could be challenging for smaller clubs. That's something that could be relaxed under a future phase of reopening, he said.

"I think most can have some capacity even with that distancing requirement, but we also recognize this is where we are right now," he said. "If we're going to have any opportunity for any opening this is the best place that we can be right now for safe activities."

In Little Rock, the Jim Dailey Fitness and Aquatic Center in Little Rock and the community centers will not reopen "until the return to regular operations plan is finalized," city spokesman Lamor Williams said.

That raised the death toll from the virus to 17 in Pulaski County, which has the state's highest number of virus deaths, and to two in Lawrence County.

Health Department reports list two residents of Walnut Ridge Nursing and Rehabilitation in Lawrence County as among the Arkansans who have died from the virus.

Pat Layton, 79, a former executive director of the Sherwood Chamber of Commerce, is also among those who have died of the virus most recently.

Her son, Chris, said she had Alzheimer's disease and had moved into The Lakes at Maumelle Health and Rehabilitation nursing home, where she was in hospice care, about a year and a half ago.

He said she tested positive for the coronavirus early last week.

At first, he said, she had no symptoms. Then a couple of days later, she stopped eating or drinking. By late last week, she "was pretty much unresponsive," he said.

According to a report from the Pulaski County coroner's office, she died at the home at 10:23 p.m. Wednesday.

Because of restrictions to prevent infection, Chris Layton said he wasn't able to visit his mother but called every day to get updates from nursing home and hospice staff members.

"My biggest struggle is not being there with my mother," he said. "Even though she was unresponsive and probably wouldn't have known that I was there, I do, and that's what hurts."

Although she no longer recognized him, Layton, 53, of North Little Rock said his mother had been in "great shape" physically.

"She could walk farther than me or you," he said. "That's all she did all day was walk."

Before she became director of the Sherwood chamber, Pat Layton worked in loss prevention and collections in the trucking industry for about 30 years.

According to a Health Department report, three residents at the home are among 19 nursing-home residents statewide who have died of the virus. Another 29 residents and 10 staff members at The Lakes at Maumelle have been infected.

Tom Brooks, a former president of the chamber, said Layton worked there for about 10 years before retiring about 10 years ago. At the time, she was the only employee, he said.

"It was a job that she did an outstanding performance in," he said. "She pretty well kept the chamber going."

Information for this article was contributed by Michael R. Wickline and Eric Besson of the Arkansas Democrat-Gazette. 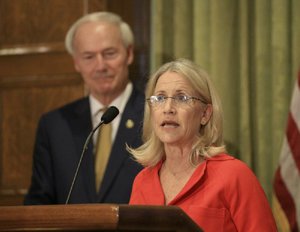 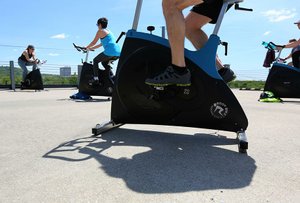 Sharon Jerome (left), an instructor with Clubhaus Fitness in Fayetteville, leads a class Thursday on the top deck of a parking garage off Dickson Street in Fayetteville. Fitness clubs around Arkansas will be able to reopen Monday under strict rules set Thursday by Gov. Asa Hutchinson. (NWA Democrat-Gazette/David Gottschalk) 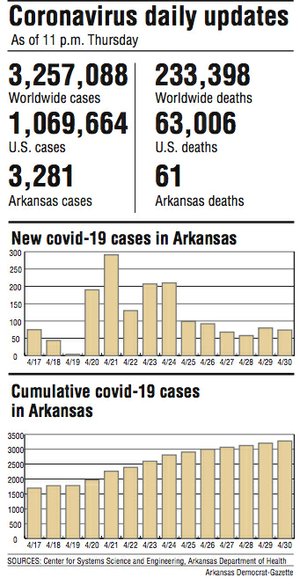