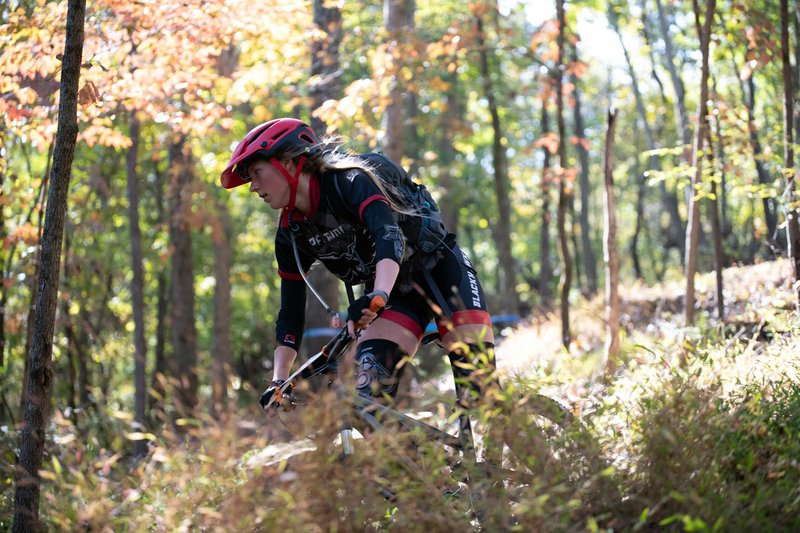 Dallice White of Pea Ridge is a multi-sport standout for the Lady Blackhawks in addition to being a top mountain biker in the Arkansas NICA league. Last fall, White finished third overall in the state sophomore girls' division. (Courtesy photo Patty Valencia)

Dallice White already had a full plate of sports she excelled in before she ever clipped into the pedals of a mountain bike.

The Pea Ridge rising junior has been a part of three state championship track teams despite missing this entire spring because of the covid-19 pandemic. With no school sports to focus on, she was able to turn her attention to mountain biking, where she is a rising competitor in the National Interscholastic Cycling Association league.

Dallice White at a glance

NOTABLE Has been on three state championship teams at Pea Ridge in track and field. … Has been a NICA mountain bike racer since she was in the eighth-grade. … Finished third overall in the state in the sophomore girls division.

"It was sad because I wanted to win another state ring," said White. "I wanted to do what we did last year when we won the indoor and outdoor championships."

White competes in the 800, the 4x800 relay, shot put and discus for the Lady Blackhawks. She is also on the volleyball and softball teams at Pea Ridge.

She got into mountain biking because her father is also a shredder. But White had to earn her way onto the trails.

"My dad bikes and he would go biking and I'd want to go," she said. "But he would say I couldn't go because I did not know how to ride a bike, how to ride the trails."

White said she eventually convinced her father to let her try, and she was able to roll the Slaughter Pen trails without any spills. From there, she joined the Arkansas NICA league as an eighth-grader.

This past fall, White, who will turn 16 this summer, competed in the sophomore girls' division. She finished third overall in the state standings.

"I was kind of cautious at first," she said. "I was just trying not to fall. But I really liked it. I liked riding through the woods. It feels like you are flying sometimes."

Josh Johnson is the Pea Ridge NICA coach, and a biker himself. In June, he will compete in the Arkansas High Country Race, a 1,000-mile endurance ride that will start and end in Fayetteville and circle the state through Eureka Springs, the Buffalo River, down to Little Rock and through the Hot Springs area before finishing up back in Fayetteville.

Johnson said White's natural athletic ability has been an asset in her development as a mountain biker.

"She is a diverse athlete for sure," Johnson said. "She always has a big smile and enjoys competing. She brings a lot of natural athleticism to the bike.

"Dallice takes all the endurance from the other sports she competes in and uses that."

White is looking forward to being able to drive this summer. She also has a younger sister, Brooke, who is also learning to navigate the mountain trails. Brooke placed fifth overall in the sixth-grade girls' division in the NICA league.

Dallice plans to remain in the NICA league and has hopes of possibly competing in races when she goes to college.

"I would really like to continue to do this," she said. "It would be really cool if this were an option in college."

That's still a couple of years off, and White will have a chance to add more championship bling when school returns from the covid-19 quarantine.