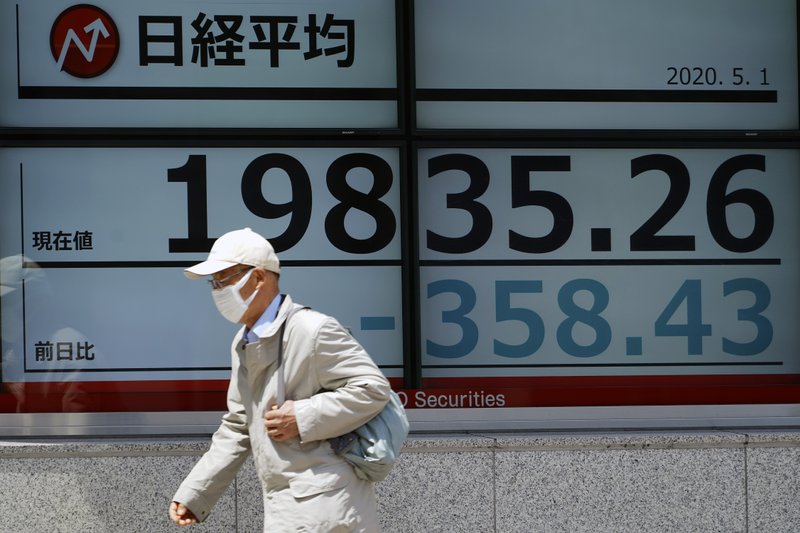 A man walks past an electronic stock board showing Japan's Nikkei 225 index at a securities firm in Tokyo Friday, May 1, 2020. Shares have dropped in Asia after Wall Street ended its best month in 33 years with losses on fresh news of economic carnage from the coronavirus pandemic. (AP Photo/Eugene Hoshiko)

Stocks closed broadly lower Friday after Amazon and other big companies reported disappointing results, the latest evidence of how the coronavirus pandemic is hobbling the economy and hurting corporate earnings.

A day after closing out its best month since 1987, the S&P 500 fell 2.8%. The slide gave the benchmark index its second-straight weekly loss.

The selling accelerated as the day went on, with energy stocks taking the biggest losses. Technology stocks and companies that rely on consumer spending accounted for a big slice of the decline.

Amazon sank 7.6% after it reported profit for the latest quarter that fell short of Wall Street's forecasts. A sharp increase in costs related to providing deliveries safely during the pandemic outweighed a big increase in revenue. The retail giant's movements have an outsized sway on the S&P 500 because it's the third-largest company in the index.

"We all had these great expectations for Amazon," said J.J. Kinahan, chief strategist with TD Ameritrade. "The stock ran up amazingly because we were expecting their earnings to be good."

Exxon Mobil's latest results also weighed on the market. The oil producer fell 7.2% after it said that it swung to a loss of $610 million last quarter. It had to write down the value of its inventories by $2.9 billion amid a collapse in energy prices as airplanes, automobiles and workplaces worldwide suddenly went idle in the spring.

The slide by Exxon Mobil helped drive energy stocks across the S&P 500 to a 6% loss, the largest among the 11 sectors that make up the index.

Wall Street has been bracing for a poor showing by companies this earnings season due to the economic shock from the coronavirus. Many companies have pulled their earnings guidance for the rest of the year, citing uncertainty about how much of an impact the outbreak will have on their business and the economy, which is now in a recession.

"There's an expectation that we'll have a very difficult second quarter for GDP and profits, and the third quarter will probably still be difficult," said Jason Pride, chief investment officer of private wealth at Glenmede.

That has many analysts looking past the next few months and betting on a recovery by the end of this year or in 2021. "But that's predicated on us not having a second wave of the outbreak," Pride said.

Disappointing company results weren't the only drag on stocks Friday. Shares of electric car and solar panel maker Tesla Inc. slid 10.3% after Chief Executive Officer Elon Musk tweeted that the price was too high. In a series of tweets Friday morning, Musk said he was selling nearly all his physical possessions and would not own a house. Then he wrote that "Tesla stock price is too high imo." After that he tweeted that people should be given back their freedom, in another protest of government stay-home orders to slow the spread of coronavirus. Then he posted parts of the U.S. national anthem.

"Clearly the Street is frustrated at this tweet," Wedbush analyst Daniel Ives wrote in an email, adding that the tweets amounted to "Elon being Elon."

Stocks rallied last month as economies around the world laid out plans to relax stay-at-home orders and hopes rose that a possible drug treatment for covid-19 may be on the horizon. Late Friday, U.S. regulators allowed emergency use of an experimental drug that appears to help some coronavirus patients recover faster.

The market posted sizable gains after the Federal Reserve and Congress announced aggressive measures to support markets and the economy. Stocks have now more than halved the sharp losses they took from February's record high into late March.

Many professional investors say the rally has been overdone given how much uncertainty still exists about how long the recession will last. If U.S. states and nations around the world reopen their economies prematurely, it may lead to additional waves of infections, which could mean more business closures, layoffs and economic devastation.

"Overall, we're generally positive on the market, but think there could be some short-term pullback here," said George Rusnak, head of investment strategy at Wells Fargo Private Wealth Management.

The yield on the 10-year Treasury held steady at 0.62%. It's still well below the roughly 1.90% level where it was at the start of the year.

Benchmark U.S. crude oil rose 5% to settle at $19.78 per barrel. U.S. crude has plunged from its perch of roughly $60 at the start of the year on a collapse in demand and strained storage facilities. Brent crude, the international standard, slipped 0.4%, to close at $26.44 per barrel.

Information for this article was contributed by Elaine Kurtenbach and Tom Krisher of The Associated Press.