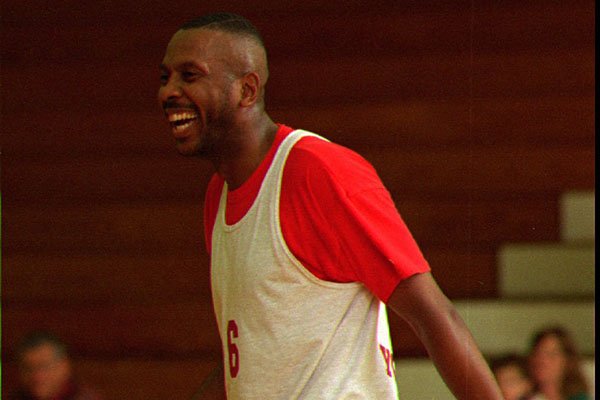 Darrell Walker is shown on March 1, 1994, less than a year after he completed his NBA career by winning a championship with the Chicago Bulls. ( Stephen B. Thornton)

Sitting down in his Little Rock home to watch ESPN's docuseries The Last Dance each Sunday night is a markedly different experience for Darrell Walker compared with the vast majority of viewers.

Thoughts swirl inside his head while the world gets re-acclimated to Michael Jordan, the 1997-98 Chicago Bulls and the stories that came with that sixth and final championship.

For Walker, it starts with the feeling of amusement.

"I'm really laughing," the NBA veteran and University of Arkansas at Little Rock men's basketball coach told the Arkansas Democrat-Gazette last week. "Just waiting for the next couple episodes to come on so I can laugh some more."

The final six episodes in the 10-part series will be rolled out over the next three Sundays, starting tonight at 8 p.m. on ESPN, but it's already clear The Last Dance has captivated the sports world's attention.

Walker, 59, didn't just follow that era or observe it from afar. The reigning Sun Belt Conference coach of the year was often right in the thick of it -- first as a player, then later as a coach.

Last Sunday, much of episodes three and four put a microscope on the Bulls' heated rivalry with the Detroit Pistons in the late 1980s and early '90s, as well as the career of Dennis Rodman, one of the original "Bad Boys" who later was a key fixture for the Bulls during their second three-peat.

Walker once played in Detroit with Rodman -- who's widely heralded as one of the sport's best rebounders and defenders -- for a little over a season, back before "The Worm" had evolved into his renegade lifestyle of colored hair, tattoos, piercings and off-court headlines.

"Didn't know Dennis Rodman went to Vegas," said a chuckling Walker of Rodman's infamous 48-hour vacation to Sin City in the middle of the 1997-98 season, which was chronicled last Sunday.

Walker said he didn't know Rodman on a personal level off the court. Not many did back then. But he does know from first-hand experience just how good Rodman was on the floor.

"He just was an incredible player," Walker said. "I do remember [when I played with] him in Detroit, him going out [one game] and grabbing at least 25 rebounds -- some crazy number of rebounds -- and then comes back in the locker room and gets a full-scale workout on the Stairmaster and the treadmill and lifting weights before he left the arena. He was a different guy.

"If he's on your team, you loved him. If you played against him, you hated him."

Walker was a member of the Washington Bullets when the Pistons were winning back-to-back titles in 1989 and 1990. Detroit was a fierce team that Jordan and the Bulls had to overcome in the playoffs before their own run could begin.

The disdain between the squads, particularly Jordan and former Pistons point guard Isiah Thomas, exists to this day.

Much of it can be traced to the Pistons' brand of basketball, where players entering the lane were treated like running backs going up the gut. Jordan experienced the brunt of it for years, before the Bulls finally knocked off the Pistons with a sweep in the 1991 Eastern Conference Finals.

"It was more hand-to-hand combat when we played," Walker said about the era.

Many Detroit players, including Thomas, left the floor with time remaining on the clock and without shaking hands with the Bulls at the end of Game 4 in 1991. Jordan took exception with it in the docuseries, even referring to Thomas by a derogatory name.

"I didn't think nothing of it when I was in the league playing," Walker said. "People made a big deal of it, but you saw the Boston Celtics did the same thing to them. It [was] just at the wrong time."

Walker has the luxury of knowing what it's like on both sides of the aisle. His penultimate season in the NBA was spent with the Pistons before he was cut by the franchise early the following season (1992-93).

His release turned out to be a blessing in disguise. Walker was picked up by Chicago and went on to win the only championship of his NBA career when Jordan and the Bulls completed their first three-peat.

"I'm really laughing as you watch the 'Bad Boys' part, as they're knocking people down, they're pushing people, they're trying to get in everybody's minds. It was just interesting to watch it," Walker said. "And knowing how Michael ticks as a player, knowing his mental toughness and all that stuff, I'm just sitting here watching -- because, you know, look, I have a friendship with MJ, and I have a friendship with Isiah.

"Both of them are in my phone. If I text one of them to have them call me, they'll call me, either one of them. Their little spat, that's their spat. It has nothing to do with me."

Walker's history with Thomas dates back much further. Both grew up in Chicago and have known each other since they were 16.

Thomas gave Walker his start in coaching with the Toronto Raptors in the mid-1990s when Thomas was an executive for the team.

Thomas' birthday was on Thursday, which prompted Walker to take to Twitter to shout out to his old friend.

"Had to wish a happy birthday to one of the best PGs in the history of the NBA," Walker wrote. "@IsiahThomas and I have been friends since I was 16 and I'm indebted to him for giving me my start in coaching." 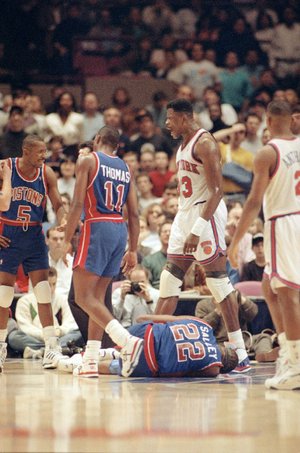 Photo by AP
Darrell Walker (left) played the 1991-1992 season with the Detroit Pistons alongside longtime friend Isiah Thomas (11). As documented in ESPN’s The Last Dance, the Pistons were a fierce rival of the Michael Jordan-led Chicago Bulls. (AP file photo)

Just a couple of weeks earlier, Thomas had tweeted his own shout out to Walker.

Walker believes Thomas, an NBA Hall of Famer and 12-time All-Star, never has been given his due as a player.

"That era that he played in," Walker said, "he had to be one of the top five or six players in his era -- and that's saying a lot.

"Has he been reflected in history like some of his contemporaries? No. But it is what it is. There's nothing he can do about it. The people that competed against him, they know. They know for sure, I can tell you that."