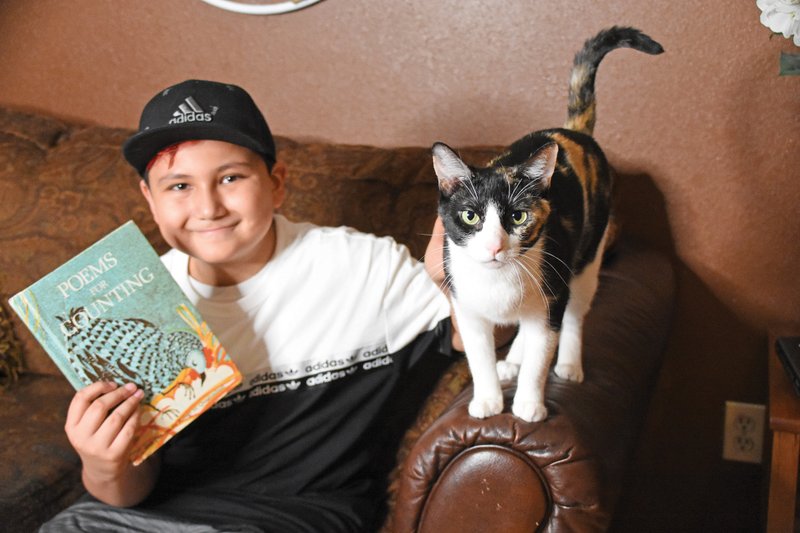 Jace Ruiz, a fifth-grader at Beebe Middle School, sits on the couch with his cat, Jasmine. Ruiz started his own YouTube channel to help encourage his fellow classmates with daily activities.

Eleven-year-old Jace Ruiz may have found his calling.

Tired of being stuck inside the house with not much to do, Ruiz started his own YouTube page, titled Fun Learning With Jace.

“I wanted to do this because I was going stir-crazy, and I needed something to do,” said Jace, a fifth-grader at Beebe Middle School.

He said he made the YouTube page to encourage his fellow classmates with daily activities such as physical education, science experiments, arts and crafts, and video games.

“On Mondays, I do science experiments, and on Tuesdays, I do arts and crafts, and on Wednesdays, I read stories, and on Thursdays, I play video games,” Jace said. “I usually play Minecraft, but last week, it wouldn’t work, so I played Rocket League.

“I prefer Minecraft because I enjoy the fact that you are able to build anything you like, and you are able to play online with your friends. I also like how it is a survivor game.”

Right now, Jace has about 87 subscribers for his page, but he said once he reaches 100, he plans to donate money to a charity.

“It feels pretty good [to get the attention for my videos],” Jace said. “At first, it was mostly just people at my school or on my soccer team who watched, but it feels good to have other people watch me.”

He said someone from Corpus Christi, Texas, sent him a science-experiment request, and Jace conducted the experiment. He said one of his favorite activities is anything related to soccer. He said he is working hard to stay in shape for soccer, so he is completing a lot of drills.

“I like that he is wanting other kids to have fun if they are bored at home,” said Monica Ruiz, Jace’s mom. “It’s something they can do at home every day of the week.”

“I don’t think he likes art a whole lot, but he likes to dive in and experiment with the materials,” Davis said. “So experimental is what I would like to describe him as.”

Davis, who also had Jace as a student in the first grade, said she has definitely seen his personality grow over the years and how he interacts with his friends.

“There is a quiet side to him, but if you get him in a comfortable environment, he just breaks out of his shell,” Davis said. “This [YouTube page] taps into his experimental side. Like most kids, he probably watches a lot of YouTubers and gains experience just from watching.

“He had a desire to help his peers during this time.”

Monica is the camera person for Jace’s videos, so she said she is right there watching every time.

“But he knows how to upload the videos himself,” she said. “All I do is turn on my ring light and use my phone to record it. He uploads all of it and does that on his own.”

Monica said Jace has always had an interest in YouTube and said “he is pretty tech savvy, too.”

“He is a smart kid as well,” Monica said. “He was just trying to do something for his friends and stuff and have something to do, so to get the attention he has is pretty surprising.”

“I also used to be a preschool teacher at a day care, so I’ve got some experience with arts and crafts,” Monica said. “But for the science experiments, we are mainly just using Google.”

Davis said Jace has always been quick to jump in and give suggestions to his friends during class. She said he is pretty quiet, but he likes to help his fellow classmates and help them brainstorm.

“I think he has really found something he is good at here,” Davis said. “I have watched [his work], and he is so good at it. He uploaded one [video] recently with his niece, doing their PE lesson, and they just look like they were having fun.”