A book for Momma 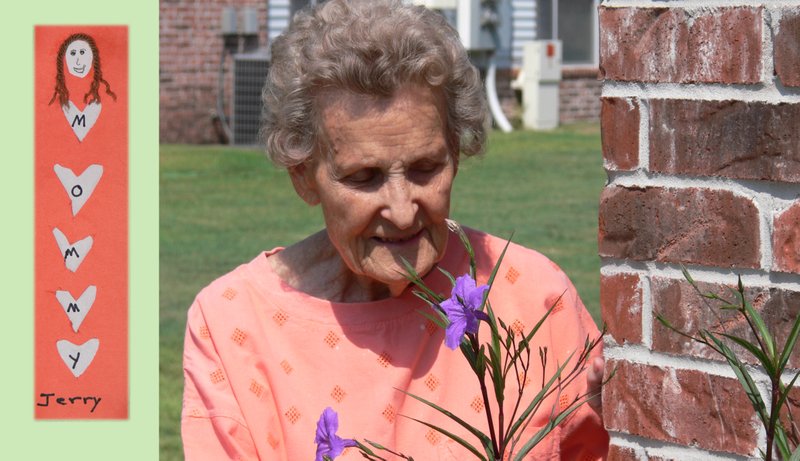 One time, Janie Florene Mullens Butler's children gave her flowers (at right) that took over her flower bed. That present was not as good as the bookmarker (left) son Jerry gave her in the first grade. (Special to the Democrat-Gazette/Jerry Butler)

The most satisfying gift I ever gave for Mother's Day was an orange construction paper bookmarker.

I made it for my mother in the first grade. It had all the elements a mother who came of age in the Great Depression wanted. It cost little, it could be used more than once, it represented an effort of my time, she knew where to store it, and it dovetailed with her love of reading. She gave me, in return, a big hug and a smooch. What could be better?

Mother is 99 years old this Mother's Day; she was 27 when I was in the first grade. I have tried 71 times to match that first gift with a successful followup — to little avail. I mark it up to "Beginner's Luck."

This year, the plan is to expand on my first-grade gift and give her, not a bookmarker, but an electronic book as a tribute.

It's a book about her and four female relatives. It will cost little, it can be read again and again, it represents a healthy effort of my time, it can be stored on her iPad or computer, and it works with her love of family and reading. I suspect I'll get a soft kiss on the cheek in return. What could be better?

This electronic book has other advantages. It sets up the likelihood that on her 100th birthday, in February, her friends and great-great-grandchildren who come to greet her will know her better because they have read about her life's journey. It will please her if they have read the book and if they ask her questions about her memories.

A well-bound copy of the manuscript might be an appropriate gift for her then. For some future Mother's Day, a published copy of the book that she could sign and give to others might work. Giving her milestones to anticipate might prolong her zest for living. What could be better?

There is no way a Mother's Day gift like this can be a surprise. In fact, she has known about it since before Thanksgiving. A rough draft of the first chapter was her Christmas gift in 2019.

Janie Florene Mullens Butler still has an intellect that is curious, critical and creative. Her hearing is good, and her eyesight has only slightly dimmed. She lives by herself and manages her own affairs. Her memories and the family stories passed down to her as a girl have provided much of the stuff that makes the book distinctive. She has participated in its writing by providing historical detail and newspaper clippings. She has corrected my spelling, replaced commas with semicolons and made suggestions about word choice. As a former executive secretary, she is an excellent grammarian and has kept my subjects and verbs in agreement.

Here's an example. In one place I described a family scandal from the 1880s discreetly in dialogue as "a roll in the hay." As Mother was proofing the draft she said, "They would not have used that phrase back then." I thought she must surely be mistaken. "A roll in the hay" had just the naughtiness and rural charm I wanted to convey. "They would not have said it like that back then," she insisted.

"Well, what would they have said?" I asked.

"I'm not sure, I'll think about it," she answered.

While she was thinking about it, I checked idiom.com for "roll in the hay." The phrase was first used to refer to a romantic interlude in an Academy Award-winning movie, This Above All, in 1942. After that, it moved into popular use.

Momma was right — as usual.

I asked, "What about using the word 'canoodle'?"

"That sounds about right," she said.

Etymology.com suggests that "canoodle" means about the same thing as "roll in the hay," and it came into use in 1850. It was part of the vernacular for about 40 years, the precise period I was referencing. Not only that, "canoodle" is a fun word to say out loud. Right again, Mom.

The book I have written, Mothers, Memories, and Birds, is a 200-year saga of a southern American family, told in the voices of five women who lived it. It is fewer than 300 pages long. 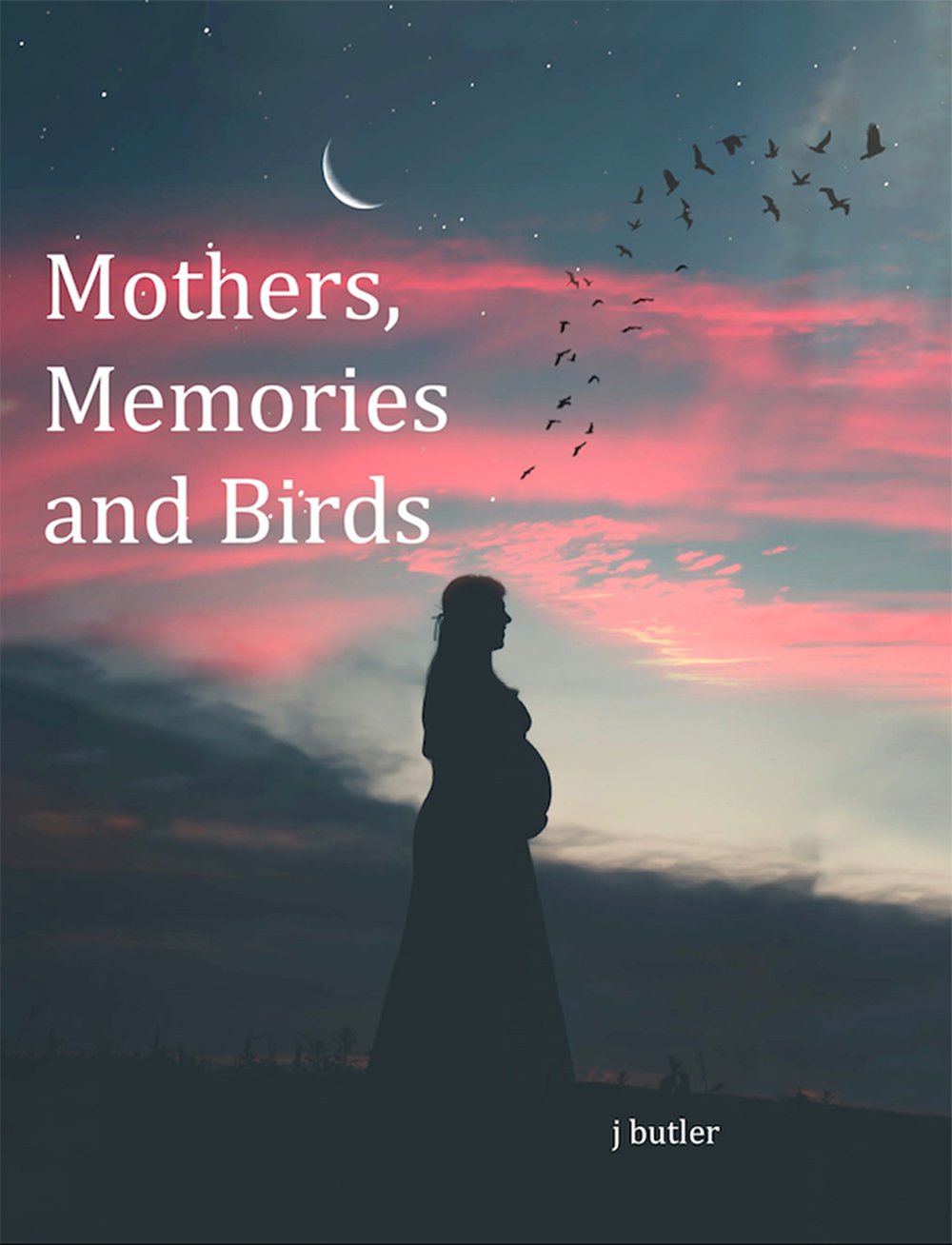 (Special to the Democrat-Gazette/Jerry Butler)

The book feels like a novel, but it is too true to be called fiction. All the main characters are real people, the places are real, the key events really happened. Yet the words these characters speak, the minute details of their comings and goings, and their true motivations have been reconstructed from conflicting and flawed memories told to me by Mother and others.

It began as a genealogical study. However, the typical stuff of genealogy — barren dry leaves of Census reports, wills, land transfers and tax records — doesn't inspire empathy for the hearts and souls of great-great-great-grandparents. More helpful are oral recollections passed down between generations and the admittedly scant documentation drawn from personal letters, newspaper accounts and photographs.

The book links the biographies of five generations: a Cherokee woman who avoided the Trail of Tears; a migrant from Alabama to Arkansas who had nine girls and no sons and was abandoned by her husband; a cheerful, uneducated, Depression-era widow who was caught up in the making of the atomic bomb; and a modern super-Mom who balanced motherhood with a pioneering professional career. Of course, it also includes my Mother, who kept the home fires burning while her husband was in the jungles of New Guinea in World War II and who steered her sons through the integration crisis of Little Rock Central High School. 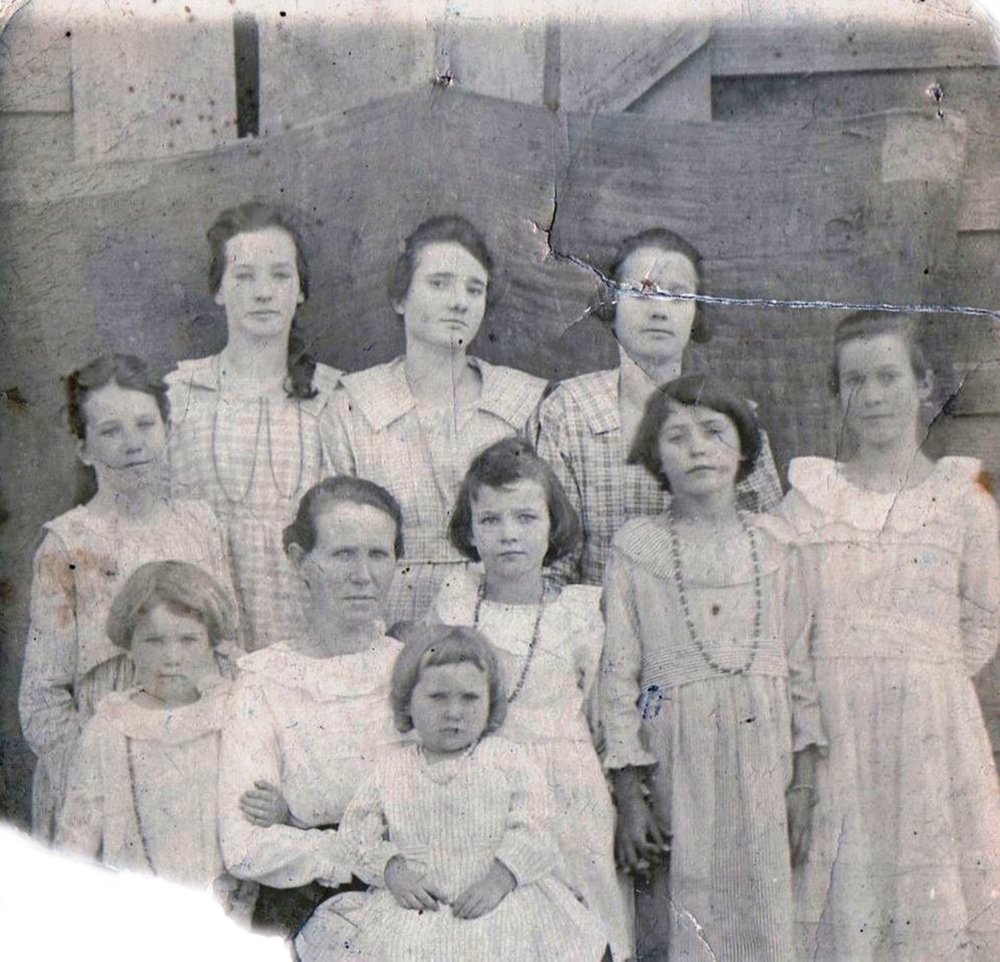 Betty Jackson, wife of Ahyoka's son Oliver, with her nine daughters in 1921 at El Paso, Ark. (Special to the Democrat-Gazette/Jerry Butler)

The book also tracks the gradual degradation of the South's natural environment as seen in the decline of birds.

My mother is not a hard person to give a gift to, even though she is hypercritical. She favors nostalgic, handwritten poems and homemade cards over department store purchases. She is gracious in receiving gifts, even if it's nothing but good wishes in a telephone call. In most instances, nothing is what she truly prefers.

She has this rather irksome notion that "It is more blessed to give than receive." Where did she come up with that? She would like Mother's Day a lot better if the tradition called for mothers to give gifts to their children that day, rather than the other way around. Starting in 1970, for 10 straight years, she tried to kickstart such a tradition by buying each of her three sons a dress shirt for Mother's Day. The tradition never took hold, much to her chagrin.

After the bookmarker, there were a few Mother's Day gift disasters. One year, we brothers agreed to sit for a portrait. We donned leisure suits in three different colors, and with our goofy hair-dos and Kenny Rogers beards, posed outdoors. She got a photograph only a mother could love. She put it in a ridiculously large frame and displayed it in the foyer of her home on a walnut easel that our father made.

When she downsized to an independent living apartment many years later, she could scarcely get the thing through the door. It allows grandchildren to laugh at their fathers.

Two years, we planted irises and Mexican petunias in her flower bed, and they bloomed nicely but soon overgrew all her other plants. On a subsequent Mother's Day, we had to dig them all out.

We bought her a waffle iron once, but she gave it back because she already had two. We've bought her any number of books, and she returns them to the giver after reading. She would prefer for us to buy books for ourselves and let her borrow them. Even better, check them out of the library. Mother is a reader, not a collector.

My brother Toby might have delivered her most memorable Mother's Day gift when he took her water skiing at DeGray Lake. She has always enjoyed the water, and in her younger days taught hundreds of friends, neighbors and family members to ski.

But it had been almost a decade since her last outing and she was 89. She pulled herself up behind that boat. Toby, who was skiing alongside her, splashed down well before she did.

THE LIVES OF MOTHERS

Why would anyone want to read a book about your mom?

Starting with the classical biography Plutarch's Parallel Lives, literary biographies have largely disregarded mothers. The website Reedsy Discovery lists what it calls the "Thirty Best Biographies of All Time." Only seven tell the stories of women. Motherhood is a neglected topic in all but two of those seven. The Immortal Life of Henrietta Lacks by Rebecca Skloot and Prairie Fires by Caroline Fraser (about Laura Ingalls Wilder) are the only two that treat motherhood with insight.

Biographies of women have been dominated by queens, movie stars, sports figures, first ladies, notable writers and politicians. A few of those, like Mommie Dearest (about actress Joan Crawford) and Becoming by Michelle Obama, have dwelt on motherhood in addition to recounting a public life with widely known incidents.

In contrast, biographies of remarkable, but not famous, mothers tell never-before-heard stories. An author does not need to be an experienced writer to capture the drama, humor and adventure of such lives. The stories seem to tell themselves — if the author gives voice to the principal character.

When stories are told of intriguing mothers who live in ordinary circumstances, the passion of their children to tell these stories can make for engrossing reading. Such was the case with Angela's Ashes by Frank McCourt. That portrait of a poor mother in Depression-era Limerick, Ireland, won him the Pulitzer Prize in biography in 1999. All Over But the Shoutin' by Rick Bragg is a similar work by a Pulitzer winner, about a loving mother who struggled to protect three sons from the effects of poverty and ignorance that had tainted her own life. The Liar's Club by Mary Karr is by the daughter of an oft-married woman whose secrets threatened to destroy her east Texas family. It was an award-winning title that was a New York Times best-seller. The Color of Water: a Black Man's Tribute to His White Mother by James McBride (winner of the National Book Award) is yet another book about a mother who, though not famous, led a compelling life. Also of note is The Joy Luck Club, by Amy Tan and Mom & Me & Mom by Maya Angelou.

Why would anybody want to read a book about your mother? For the same reason, millions of people have read the books mentioned above about mothers they didn't know. The honest telling of such stories has a timelessness that people of every age, culture or station in life can enjoy.

Even if the readers are few, the significance of the story for family and for Mother makes it a worthy gift.

[RELATED: Self-publishing a digital book can be quick and inexpensive]