City argues numbers are skewed by Lincoln County prison by BILL BOWDEN AND DALE ELLIS ARKANSAS DEMOCRAT-GAZETTE | May 3, 2020 at 2:52 a.m. 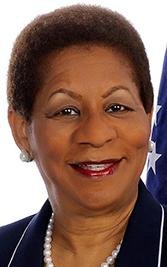 Pine Bluff ranks as the No. 3 "hot spot" in the country for new coronavirus cases, according to The New York Times.

Mayor Shirley Washington said the numbers are skewed by an outbreak at the Cummins prison unit in neighboring Lincoln County.

"Those basic numbers are coming from Cummins, and I don't think that's fair," said Washington."It literally made me sick, because it's not an accurate reflection of how well I think we've done in working to combat the spread of this virus."

According to the Times analysis at https://nyti.ms/3cXn9gk, coronavirus cases in Pine Bluff have been doubling every 3.9 days.

But the vast majority of those positive coronavirus cases were actually in Lincoln County.

Lincoln County has had 755 positive coronavirus cases, compared with 162 in Jefferson County, where Pine Bluff is the county seat, according to the Arkansas Department of Health.

The U.S. Office of Management and Budget delineates metropolitan statistical areas based on census data.

"The general concept of a metropolitan or micropolitan statistical area is that of a core area containing a substantial population nucleus, together with adjacent communities having a high degree of economic and social integration with that core," according to the Census Bureau.

The analysis appeared in the Times online Upshot section, which attempts to explain "politics, policy and everyday life with an emphasis on data and charts."

"It says we have 757 recent cases in the Pine Bluff area but does not show that we have 860 current cases in Cummins max," said Hutchinson, referring to the prison.

He said there's been a push to test inmates at Cummins because of a coronavirus outbreak there. The Times analysis "fails to attribute" the jump in numbers to the increased testing at the prison, said the governor.

"By broadening testing to both symptomatic and asymptomatic inmates and staff, we have been able to identify positive cases and immediately begin mitigation efforts to slow the spread in the prison population," he said.

The Times analysis, which was updated Tuesday, shows Pine Bluff ranked No. 3 in the "current hot spots" category -- more thoroughly defined as "where the outbreak is worst now."

The category ranks metro areas based on cases, relative to population, over the past two weeks. New York City is ranked No. 5 in that category. Marion, Ohio, is No. 1.

The current hot spots category also focuses on deaths over the past two weeks. The Pine Bluff metropolitan statistical area ranked No. 107 in that category with five deaths, according to the Times.

But four more covid-19 deaths were reported in Jefferson County on Tuesday night, raising the total to 13 in that county. No coronavirus deaths have been reported in Lincoln or Cleveland counties, according to the state Health Department.

The Times analysis placed Pine Bluff at No. 4 in the next hot spots category -- behind Sioux City, Iowa at No. 1 and just ahead of Amarillo, Texas, at No. 5. That category is based on average daily growth rate of cases.

Pine Bluff ranked No. 8 in the category "The Places Hit Hardest" based on cumulative cases (per 1,000 population) since the start of the outbreak. In that category, Marion, Ohio, was No. 1, New York City was No. 2 and New Orleans was No. 4.

Washington said she fears the information, as presented in the Times analysis, will help foster a negative view of Pine Bluff that she said she and others have spent years trying to counter.

"It's almost like Pine Bluff has been branded with whatever is negative, whatever is bad, the worst-case scenario, we get the rap," she said. "We've been working aggressively to try and change that image, and it hurts, to put it mildly, that we continue to have this negative tag over Pine Bluff."