I would recommend planting 3 out of the 4 mystery plants for the week.

April 28 – Asarum splendens or Chinese ginger is this beautiful evergreen groundcover for the shade. 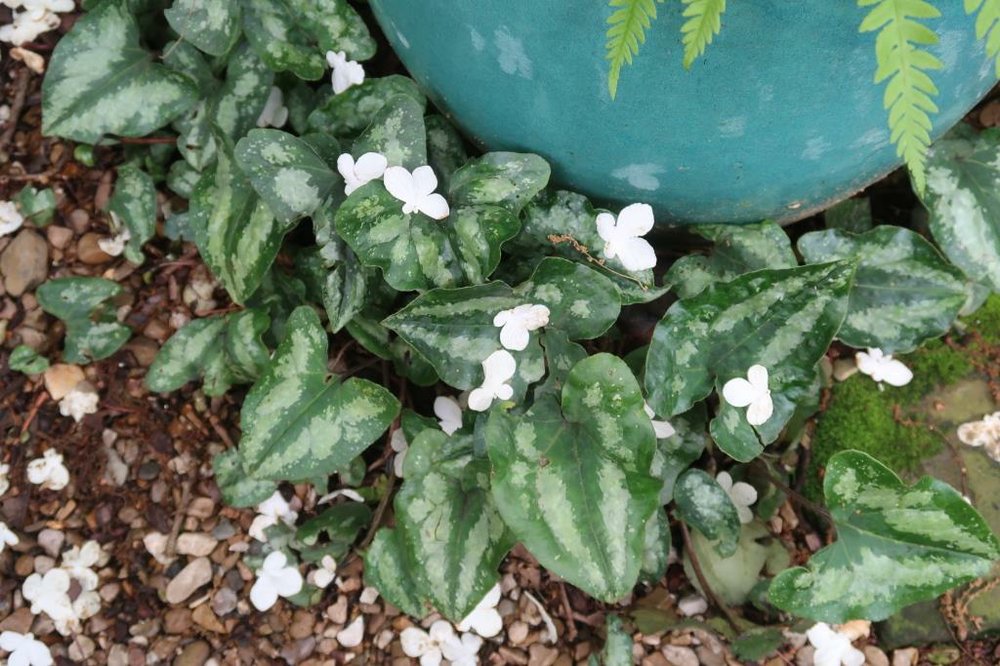 Excuse the white flowers in the picture. The groundcover was growing beneath a viburnum which was shedding some blossoms and I didn’t even pay attention to it. Some of you thought the groundcover had white flowers! Oops, it does not. The flowers of Asarum can be quite showy, but you rarely see them unless you go looking for them. They are small and dark colored, and are hidden beneath the foliage. 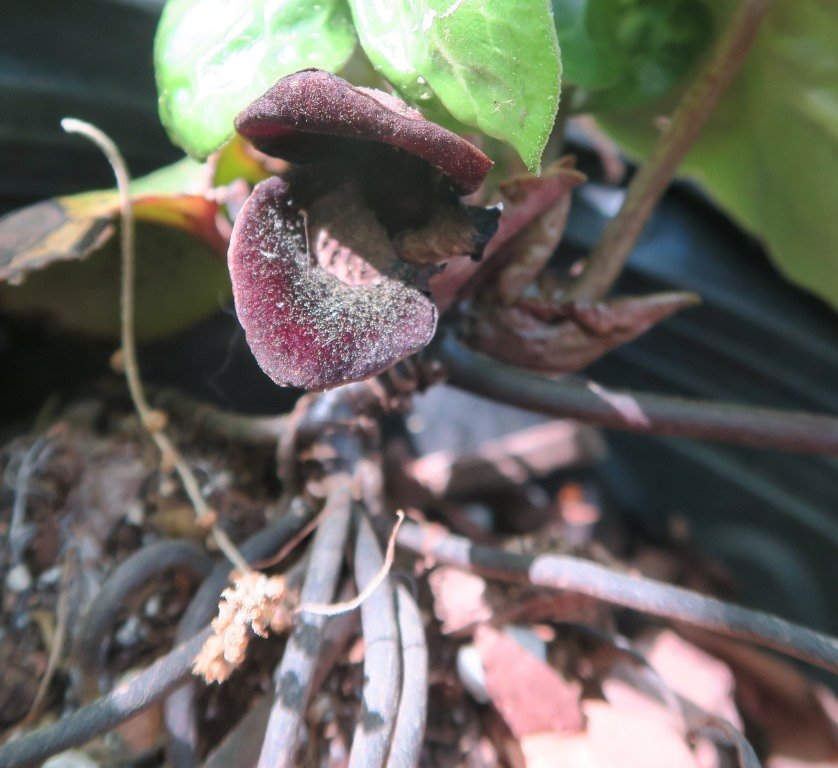 You aren’t growing Asarum for flowers, but for the foliage. Asarum is a family of plants commonly called ginger. There are about 70 different species, with some being native to the US, while others are not. 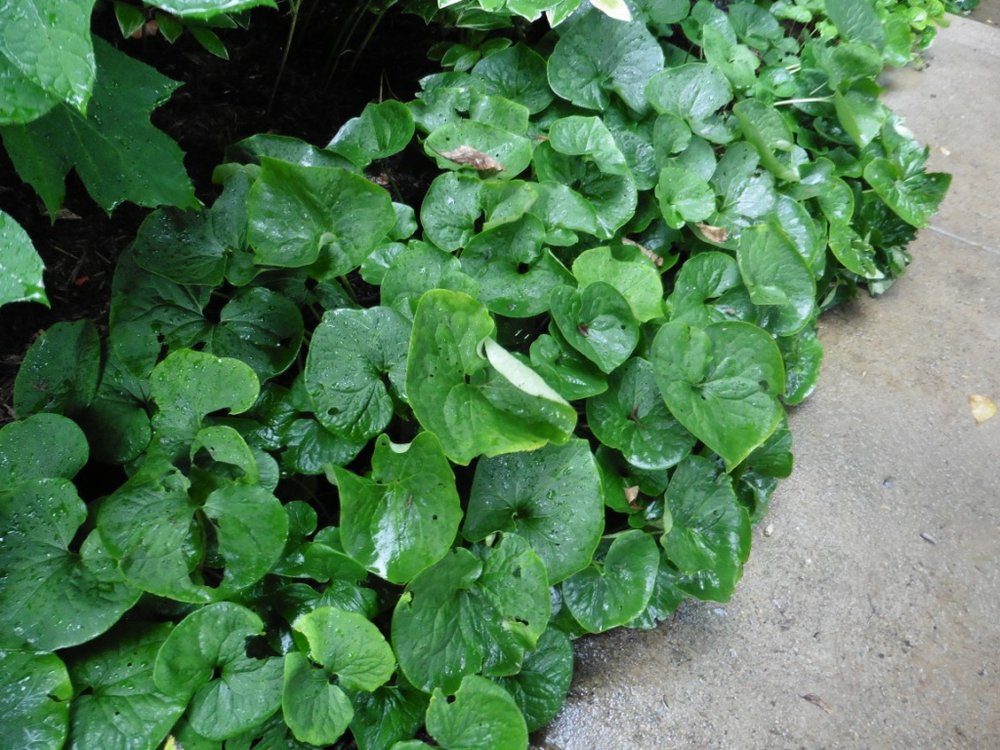 Some are evergreen and some die back each winter. Some are solid green, and others are variegated. Almost all of them do well in shade to partial shade and are low growing. Asarum canadense is the native wild ginger. It is deciduous. Asarum virginicum is an evergreen native. 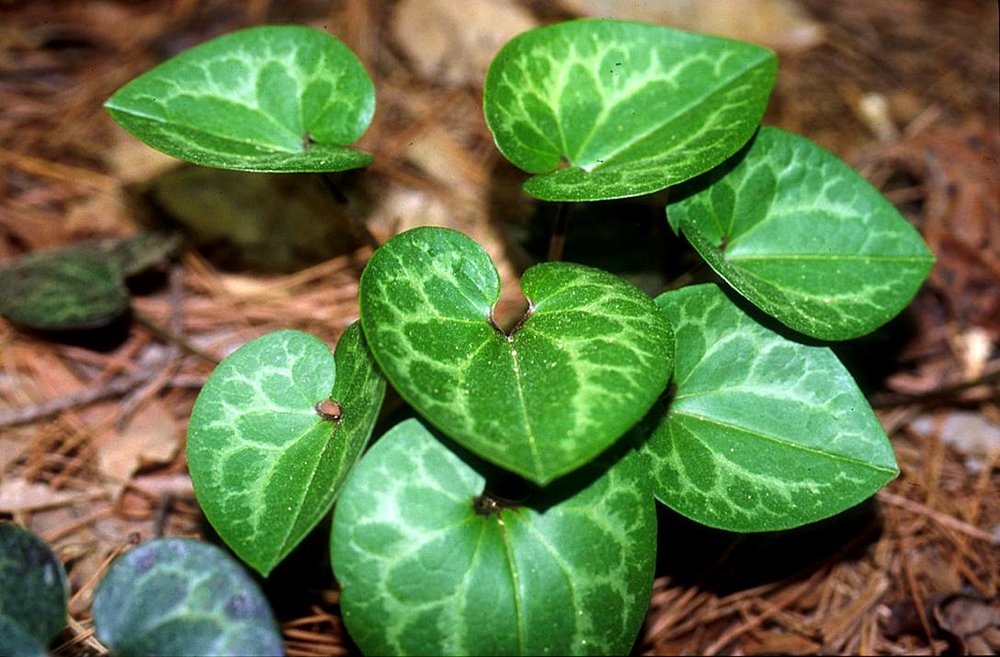 April 29 – Laurentia fluviatilis or Blue Star Creeper is the name of this ground-hugging perennial groundcover. 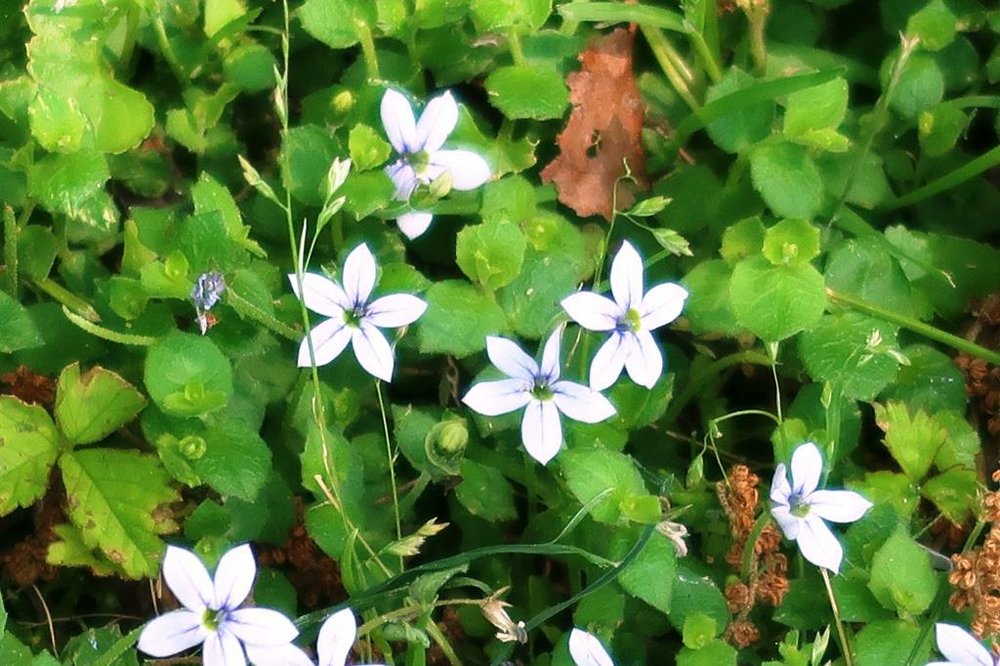 I first learned it as Pratia. It has tiny leaves and small blue flowers which have spread out into my lawn. I like the combination of flowers and lawn and it is so low growing that the mower does not impact it. 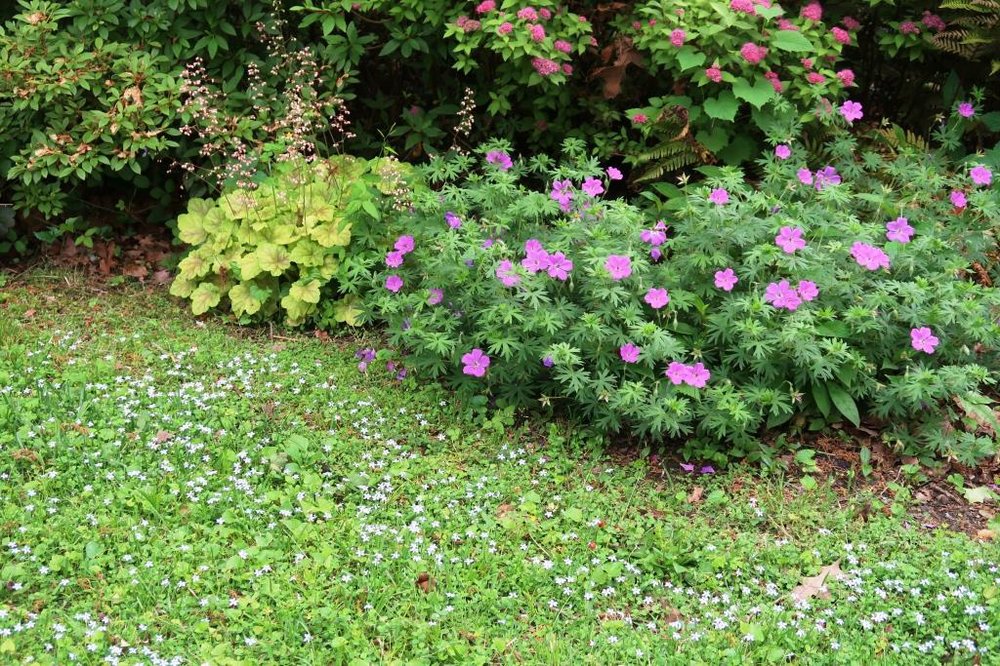 It blooms for about 8 weeks or so from mid-spring to early summer. I have it growing in partial sun and it is happy. It takes foot traffic easily. There is a white flowering form as well. It would also be amazing around stepping stones.

April 30 Houttuynia cordata– chameleon plant, is a deciduous groundcover that will grow in sun or shade. 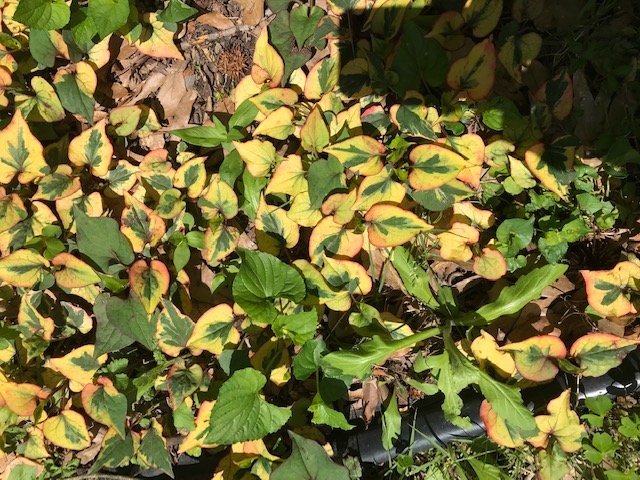 It can be invasive, especially in moist, well-amended soils. There are two varieties—one has solid green leaves 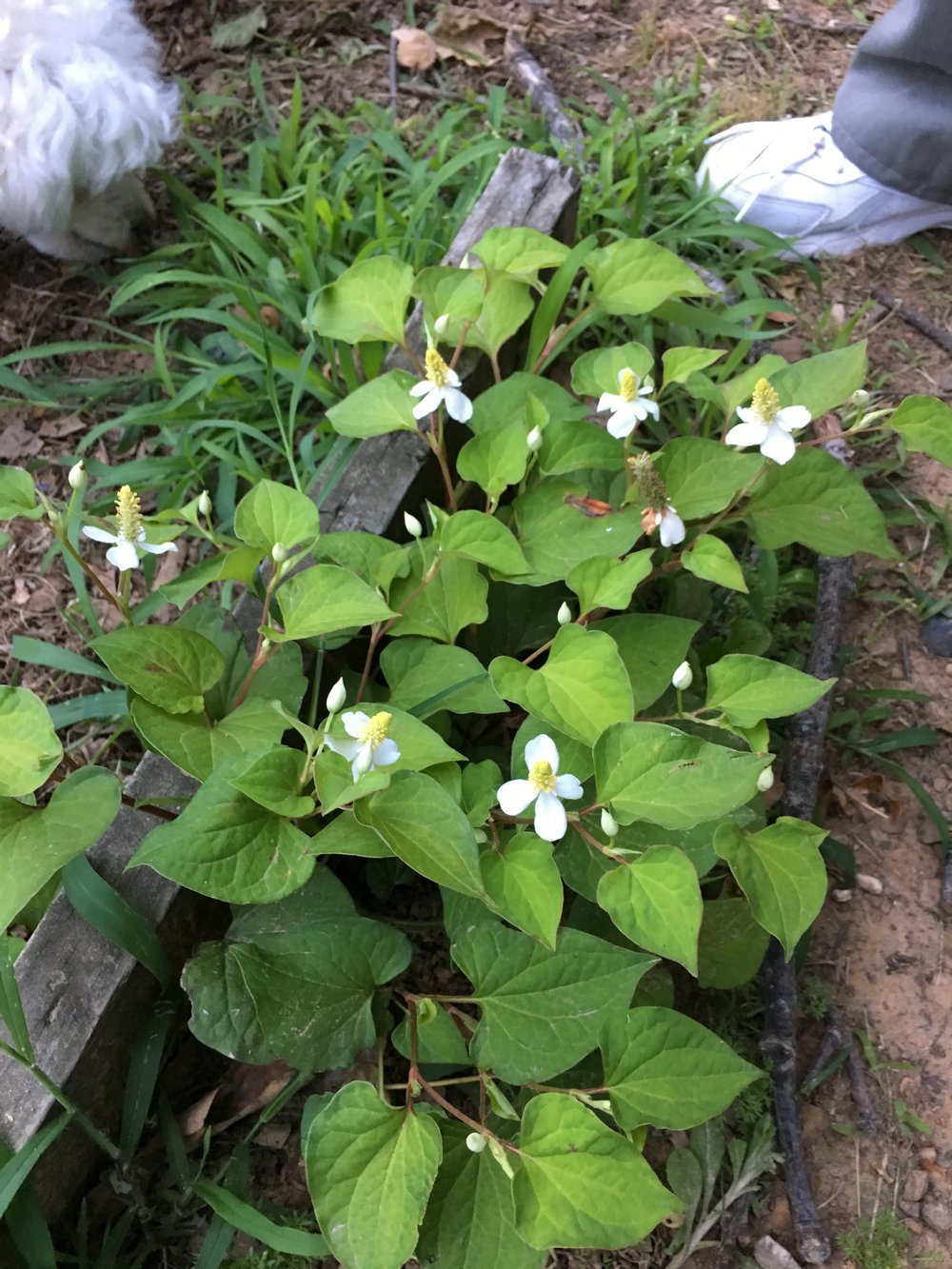 while the other has variegated foliage. The more sunlight it receives, the more colors you will see in the variegated plant. Many gardeners detest this plant, while a few actually like it. It spreads by underground rhizomes. It blooms in late April through May. Many find the “aromatic” foliage off-putting, but believe it or not, it is actually eaten in China and Vietnam! Some of you guessed wild violets, which the foliage does resemble. Violets have a pansy-like blossom 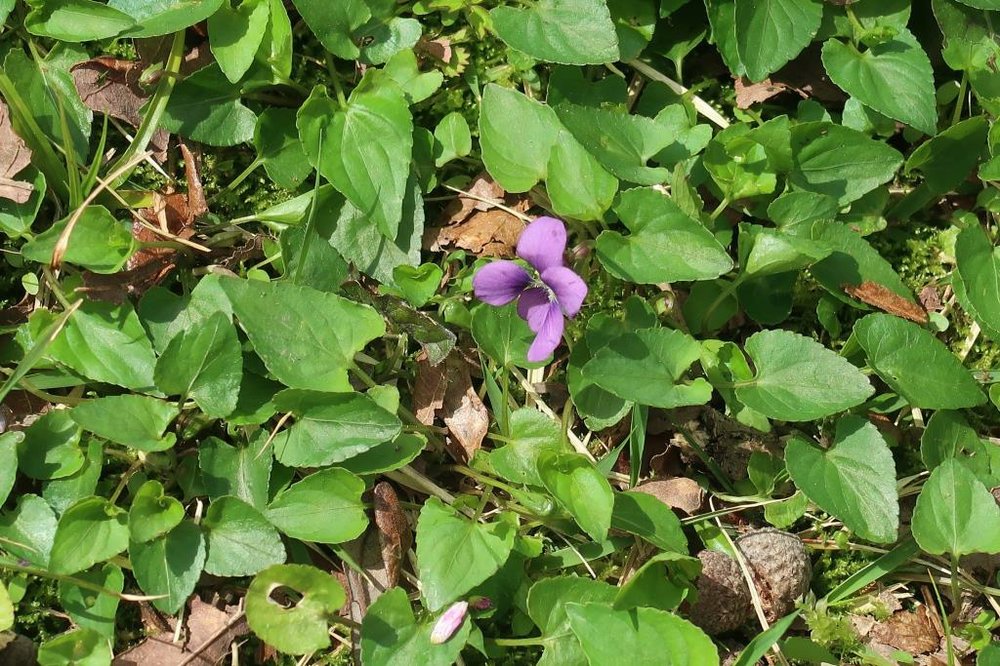 while houttuynia has a four-pointed white bloom. 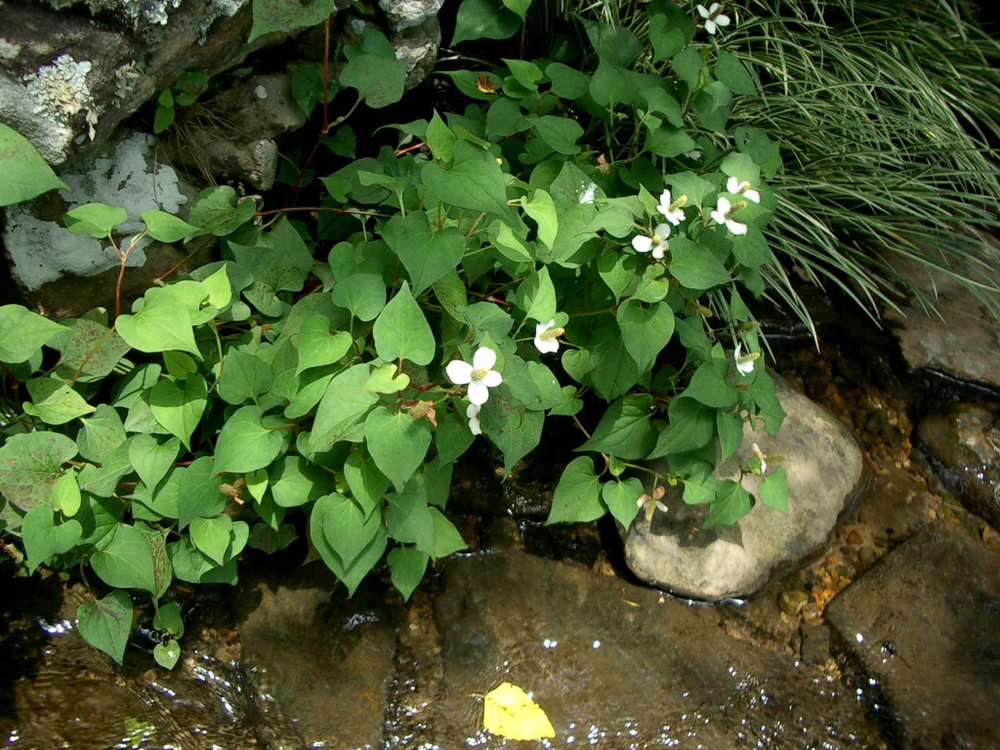 May 3 – Blue Daze or Evolvulus glomeratus is the name of this sun loving annual with beautiful sky-blue flowers. 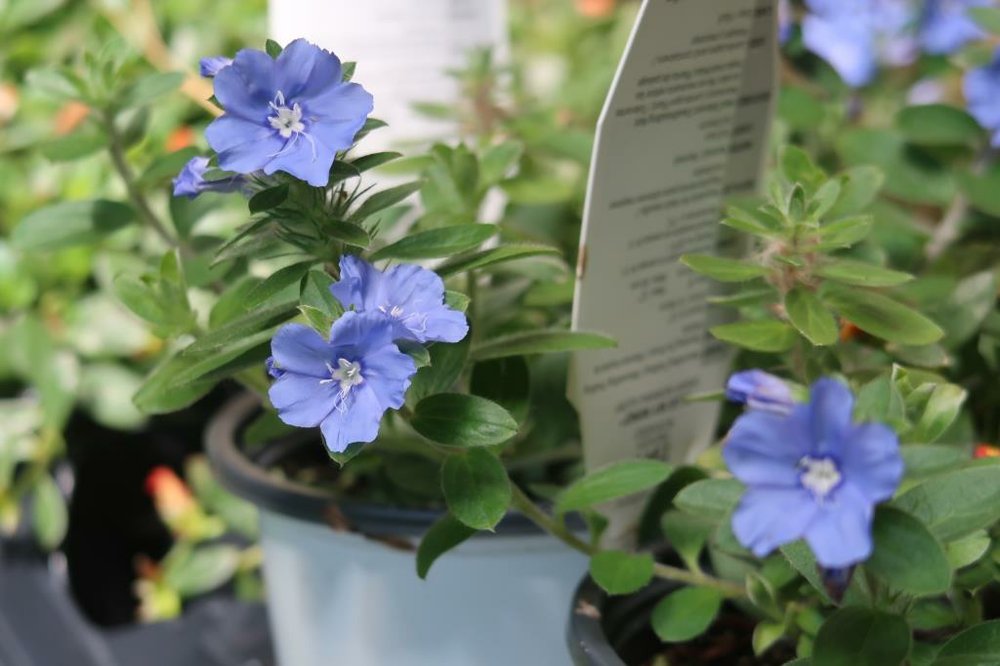 It is actually a member of the morning-glory family. Native to Brazil, the plant has loosely trailing stems which makes it a nice addition to a hanging basket or as a low growing annual. 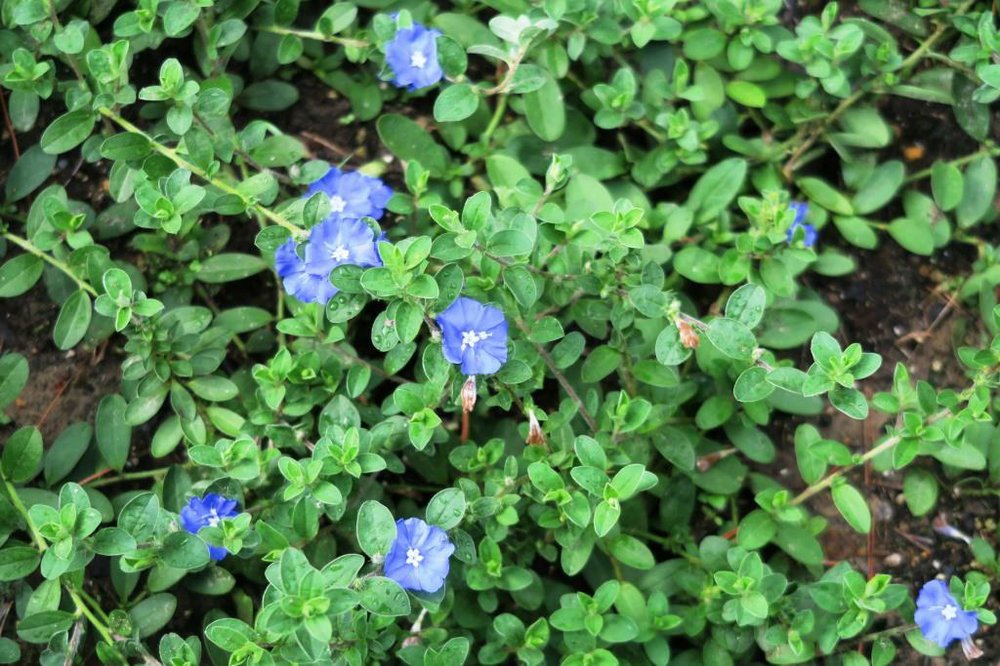 The flowers often close at night. It does well with average water in full sun to partial shade. Blue is a rare color in bedding plants, which makes it even more attractive.