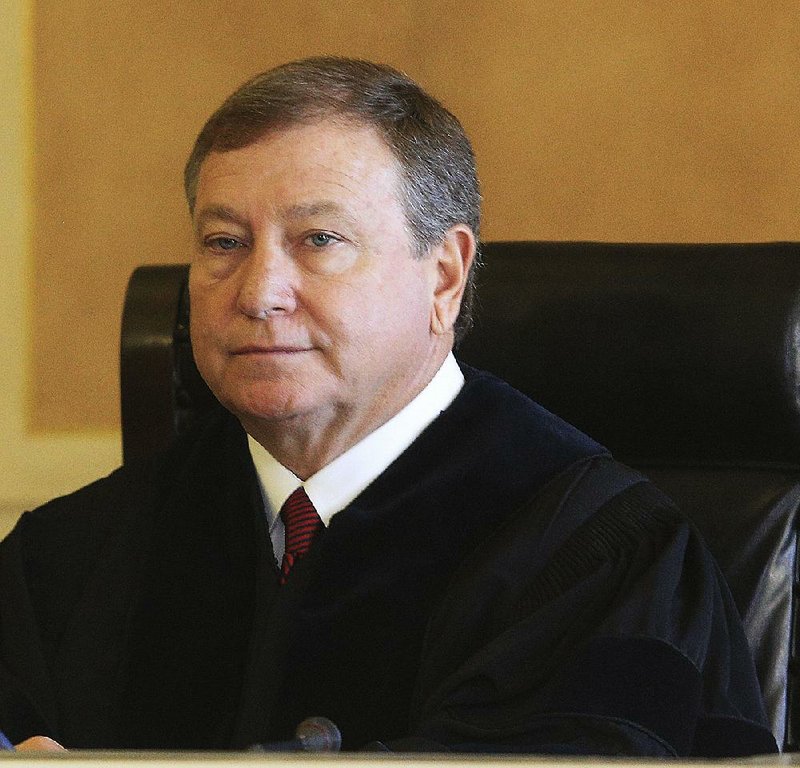 In 2018, two federal district judges in the Eastern District of Arkansas ordered the release of Arkansas Department of Correction prisoners John Brown Jr. and Tina Jimerson, who had each served 26 years of life sentences that the judges found were based on wrongful 1992 convictions in Dallas County.

The panel's opinion also elaborated on the district judges' written concerns about the actions of law enforcement officers and the deputy prosecuting attorney who prosecuted Brown and Jimerson in 1992, saying it was clear both acted "in bad faith" by withholding exculpatory evidence from defense attorneys in a capital murder case. The deputy prosecutor at the time was Robin Wynne, now a justice on the Arkansas Supreme Court.

Ford said that in 1991, early in his career as sheriff, he planted an informant in a jail cell with Charlie Vaughn, who was facing capital murder charges alongside Reginald Early and Brown. Ford said the informant, whose name he couldn't reveal, secretly tape-recorded comments Vaughn made.

Attorneys for Jimerson and Brown say the informant, Ronnie Prescott, was later tracked down and acknowledged scaring a "confession" out of Vaughn, who was mentally challenged, by telling him he might face the death penalty unless he confessed and named the others as accomplices. The informant acknowledged he gathered the information at Ford's behest, in a successful effort to receive promised leniency on a charge he was facing.

Vaughn soon pleaded guilty to a reduced charge of first-degree murder, accepting a life sentence, and provided information implicating Brown and Early as his accomplices, and leading to Jimerson being charged separately as a getaway driver. Prosecutors alleged that the three men had acted together in the Sept. 22, 1988, rape and murder of Myrtle Holmes, 78, who was found dead in the trunk of her car after her Fordcye home was broken into overnight.

Defense attorneys say the defendants were convicted based on a prosecution that "relied entirely on a now-recanted confession from Vaughn."

About six years ago, Early, confronted with the possibility of new DNA testing that could better determine who the rapist was, told an attorney with the Innocence Project who was investigating the case that he committed the murder by himself, didn't even know Jimerson and Brown, and barely knew Vaughn. He officially came forward on Dec. 21, 2015, and took sole responsibility for the rape and murder.

The new information from Ford and from Early's confession led to the eventual vacating of both Brown's and Jimerson's first-degree murder convictions, after years of exhaustive work by defense attorneys from the Midwest Innocence Project and the Center on Wrongful Convictions, based in Chicago, to have the cases reviewed in federal court.

Vaughn remains imprisoned, though he has petitioned another judge, Chief U.S. District Judge D. Price Marshall Jr., for another opportunity to come before the court to challenge his plea and sentence.

While the 8th Circuit opinion recounting the series of events didn't name the deputy prosecuting attorney who it said engaged in the "bad-faith" behavior, it criticized the undisclosed use of the informant who had an ulterior motive to gather incriminating information, and the failure to preserve the recording.

It is clear from Wilson's and Miller's 2018 orders that the 8th Circuit panel's opinion is talking about law enforcement officers in 1991 and Robin Wynne, who handled the murder case as a deputy prosecutor.

The panel -- U.S. Circuit Judges Ralph Erickson of Fargo, N.D., Jane Kelly of Cedar Rapids, Iowa, and Raymond Gruender of St. Louis -- said in a 23-page opinion released Wednesday that DNA evidence presented at the first of two trials, which ended in a hung jury, was inconsistent with Vaughn's statements about the rape. The evidence showed that Vaughn and Brown had been excluded as contributors of DNA, but that Early couldn't be excluded. It noted there was no physical evidence presented to link Brown, Vaughn or Jimerson to the crime.

Miller noted in his 2018 order that Jimerson's trial attorney had sent pretrial requests for information to Wynne, who replied that he had "no knowledge of any informant who led to or assisted in making the arrest in this matter."

Although Ford told the investigator years later that Wynne had determined the tape recording was inadmissible, and that Ford believed it was lost or destroyed, Wynne told the defense in 1991 that the only tapes the state had were of conversations with two trial witnesses, and that the state hadn't made any offers of leniency or other inducements to any informant, or to anyone other than Vaughn, according to court documents.

"Importantly," Miller wrote, explaining his legal reasons for allowing Jimerson to pursue her case so many years after the conviction, "Jimerson did not learn until April 26, 2015 that the evidence was not made available to counsel before trial and was suppressed by the prosecution."

Miller's order said that the investigator, Greg Stimus, also obtained the Arkansas State Police's case file into the murder, and buried inside it was a one-page report stating that on March 24, 1991, police interviewed Ronnie Prescott of Texas, though the report didn't identify him as a prisoner or an informant, nor did they describe the substance of the interview. Stimus also found a handwritten statement in the state police file that was signed by Prescott, former Fordyce Police Chief Ronnie Poole and Lt. Jerry Bradshaw of the state police.

It didn't mention that the sheriff had given the informant an incentive to obtain a statement from Vaughn, or that there was a recording.

Jimerson's attorney, Andrea Lewis of Chicago, later tracked Prescott to South Carolina, where he was incarcerated, and he admitted recording his conversations with Vaughn in the jail and confirmed that his charges were dismissed as a result.

Without the recording, the 8th Circuit panel said, "We do not know if Vaughn reluctantly and nervously confessed and implicated others, or if he willingly and confidently" did so. "It could be that the recording was merely cumulative. ... What we can conclude on this record is the failure to make any mention of the fact that Prescott recorded conversations with Vaughn in a handwritten statement ... combined with the failure to disclose the recording is evidence of a conscious effort to suppress evidence. The deliberate omission is indicative of bad faith."

"Because of the successful efforts of law enforcement and the prosecutor to conceal and destroy the recording, Jimerson [initially] lacked any evidence of bad faith, or in other words, a good-faith basis to pursue a Youngblood claim," the appellate panel said.

Youngblood v. Arizona is a 1988 case in which the U.S. Supreme Court held that failing to preserve potentially useful evidence, when done in bad faith, deprives the defendant of his constitutional right to due process. Both Wilson and Miller found that because of the delay in learning about the informant and the taped statement, Jimerson and Brown's constitutional claims under Youngblood were filed in a timely manner, allowing them to seek relief through federal court many years later.

The panel said that while the state argued that all indications are that the police and prosecutor thought the tape didn't provide any information that tended to exonerate anyone, that assertion is "unsupported by the record."

Prosecutors are required to turn over any potentially exculpatory information to the defense under a landmark U.S. 1963 Supreme Court case, Brady v. Maryland.

"Although the substance of the recording is not entirely clear, what the recording contained appears to be significant enough that law enforcement and the prosecution worked together to intentionally conceal its existence from the defense," the appellate judges said, adding, "That intent is demonstrated in several ways. .... Taken together, the uncontroverted evidence establishes bad faith."

Attorneys representing Brown and Jimerson indicated they aren't aware of any potential repercussions against the former sheriff, who left office late last year; other law enforcement officers involved in the investigation; or Wynne.

Officials with the state's judicial and lawyer oversight committees said Thursday that neither committee has a statute of limitations on investigations of judges or attorneys, though it's rare to look back as far as 1992.

David Sachar, head of the Judicial Discipline and Disability Commission, said Thursday that his committee has investigated actions taken by sitting judges that involved actions taken before they joined the bench, and has even removed sitting judges as a result. But he said that generally any investigations into pre-bench activities would fall to the Arkansas Supreme Court's Committee on Professional Conduct, which oversees attorneys.

Stark Ligon, executive director of the Professional Conduct committee, said his committee would likely be the one to investigate any complaint about an attorney's actions, even if the action occurred 28 years ago and the attorney has since become a judge. But Ligon said he wouldn't personally be involved -- or even necessarily aware of -- any investigation into Wynne, because he is related to Wynne by marriage and recuses on any cases involving the justice.

"Generally, what we hear about is fairly contemporaneous," Sachar said of the judicial commission, adding that an investigation into something that happened 28 years ago, even if a complaint was recently filed, "would be very, very rare unless it went to core question of whether someone isn't qualified."

Both committees are authorized to initiate investigations into attorneys or judges in Arkansas on their own, without a formal complaint being filed, though most cases are complaint-driven.

In Miller's Sept. 28, 2018, order vacating Jimerson's conviction, he explained why she was permitted to come before the court so many years after her conviction, even after the Arkansas Supreme Court had upheld her conviction. He wrote, "Given the prosecution's success in concealing and destroying useful evidence ..., Jimerson's efforts as an incarcerated and indigent person were diligent."

Similarly, Wilson wrote in his 2018 order commanding Brown's release if not retried within 30 days, "The state's failure to disclose the use of an informant to entice the confession is sufficient alone to undermine the verdict. But ... the state also failed to disclose, and actually destroyed, a recording of the informant eliciting the confession."

He said that Wynne "may be able to shed light on the exculpatory value of the recording," but noted that the Supreme Court justice didn't testify during federal evidentiary hearings. Wilson said he recognized "how uncomfortable it would be" to call Wynne to testify about decades-old alleged prosecutorial misconduct.

Little Rock attorney Erin Cassinelli, who helped the Midwest Innocence Project obtain Brown's release, and Lewis, of the Center on Wrongful Convictions in Chicago, said the state could still decide to retry Brown and Jimerson, but it would be hard after such a long period of time, particularly when Early has since confessed to committing the crime by himself.

Cassinelli said Brown, who was from Las Vegas and was in Fordyce visiting family at the time of the murder, "went back out west," and she hears from him occasionally. Lewis said Friday that Jimerson "has remained in Arkansas, where she can be close to her family."