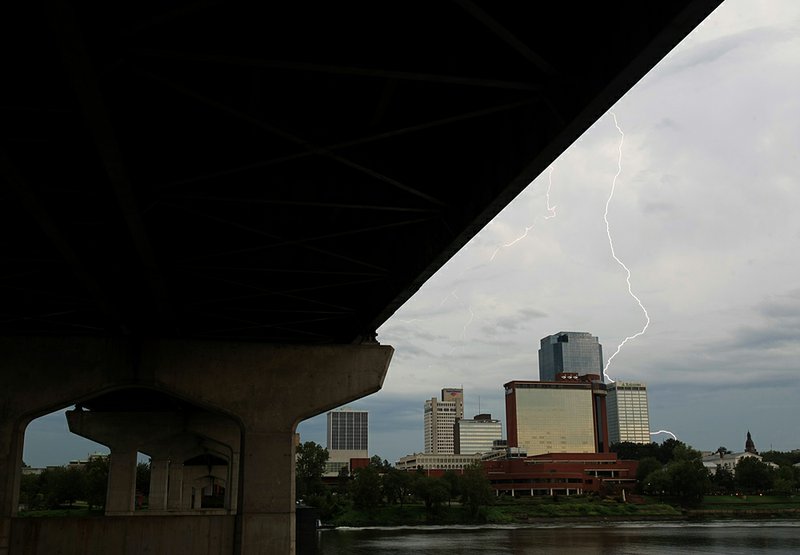 FILE - A bolt of lightning strikes behind the Little Rock skyline during a series of morning thunderstorms in 2011. ( Staton Breidenthal)

Thunderstorms moved quickly through the area that morning, but a second round was expected Monday night, with the potential to spawn tornadoes.

At 3 p.m. Monday, a line of thunderstorms was moving across eastern Oklahoma heading east toward Arkansas.

"The strongest storms will be capable of producing tornadoes, very large hail, damaging winds, intense rainfall and dangerous cloud-to-ground lightning," according to the National Weather Service.

The storms would affect Northwest Arkansas from about 6 p.m. to midnight, according to a "hazardous weather outlook" issued by the weather service at 1 p.m. Monday.

The forecast for Northwest Arkansas called for an 80% chance of severe thunderstorms Monday night.

Lance Pyle, a meteorologist with the National Weather Service in North Little Rock, said the Monday morning storms didn’t reach the capital city, but the evening storms could.

Little Rock had a 40% chance of thunderstorms Monday night.

Pyle said the nearest large hail from the Monday morning storm was in Jasper— 140 miles north of Little Rock — where it measured 1.5 inches in diameter.

The National Weather Service in North Little Rock said "an isolated tornado can not be ruled out" for the central part of the state Monday night.

The cold front will drop high temperatures in Little Rock from 82 degrees on Monday to 67 degrees on Friday, according to the forecast.

The National Weather Service in Memphis also issued a "hazardous weather outlook" Monday night for northeast Arkansas. There was a 70% chance of thunderstorms in Jonesboro, according to the forecast.