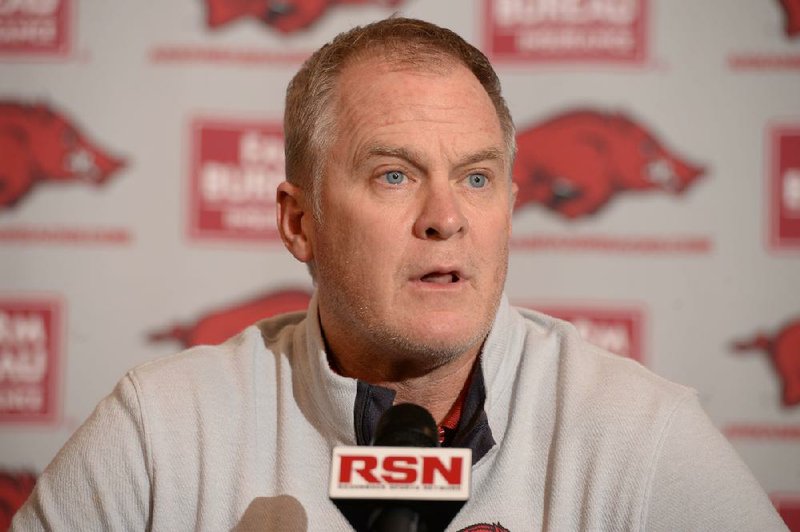 Hunter Yurachek, director of athletics at the University of Arkansas, speaks Friday, March 13, 2020, in the Touchdown Club at Razorback Stadium to address questions regarding the Southeastern Conference and the university's response to the coronavirus outbreak. (NWA Democrat-Gazette/Andy Shupe)

FAYETTEVILLE — University of Arkansas Athletic Director Hunter Yurachek laid out on Monday a best-case plan for starting football on time this fall that included a June 1 opening of weight room and training room facilities on campus for student athletes.

Yurachek discussed the scenario during a video conference meeting with the UA Board of Trustees and his fellow football-playing athletic directors Chris Peterson at UA-Pine Bluff and Padraic McMeel of UA-Monticello.

“On the heels of the governor’s announcement to open health clubs across the state of Arkansas today and with the blessing of Chancellor [Joseph] Steinmetz, we are working on a plan to open our strength and conditioning rooms, as well as our training rooms on June 1 on our campus for voluntary workouts for our student-athletes who live in the area,” Yurachek said.

The SEC is currently operating under a suspension of all athletic-related activities on member campuses through May 31. The Razorbacks are scheduled to open their football season on Sept. 5 against Nevada at Reynolds Razorback Stadium, and both Yurachek and Coach Sam Pittman have expressed hope that Arkansas can open its season on that date.

When asked by trustee Kelly Eichler when the Razorbacks would need to start practicing to open the season on time, Yurachek replied, “I think it would be six weeks out, roughly July 15.

“We would have a couple of weeks of an acclimation period where our student-athletes would have some strength and conditioning training as well as some walk-throughs and team meetings that would head into our regularly scheduled fall camp that is scheduled to start on Aug. 5. I think if we can get to a schedule where, at the latest, July 15 we have our fall sports student-athletes on campus, I think we have a really good chance of starting our football season on time.”

Yurachek stressed that three groups would need to be confident for the football season to open in early September: student-athletes and their parents; staff members; and fans.

He added SEC leadership is working on plans to start the football season on time.

“As a conference, we are focusing on that date and starting a 12-game season, along with a soccer season, a volleyball season and a cross country season,” Yurachek said. “I think the piece of that puzzle is are all our campuses open to students? And if that’s the case, that’s kind of the first hurdle that I see for our department of athletics in having a football season.

“Obviously that’s something that’s determined by our university chancellor, our system president and the members of our board of trustees, with direction from our governor and health department if that is to be the case.”