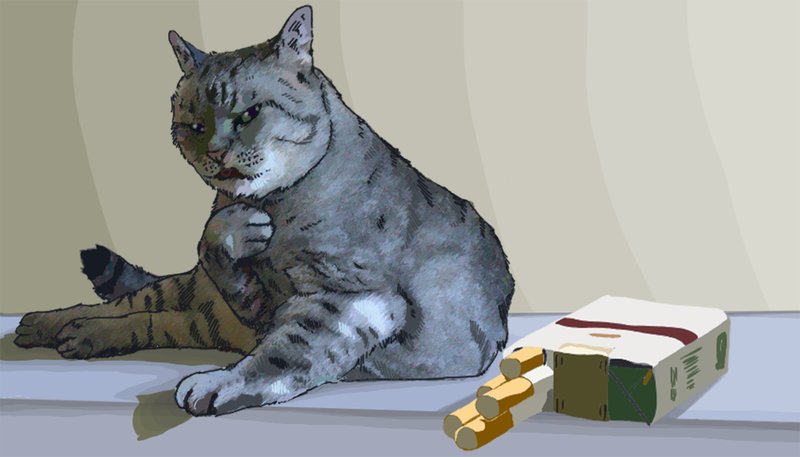 Besides breathing it, cats ingest secondhand smoke when they groom themselves. (Arkansas Democrat-Gazette/S. Aaron O'Quin)

Q I recently adopted my first pet, a young cat named Tulip, and took her to the veterinarian, who smelled cigarette smoke on her fur and recommended I stop smoking or smoke outdoors to protect Tulip from cancer.

I feel the veterinarian is overstepping her role. Still, I need to know whether my smoking could really give Tulip cancer.

A Our job as veterinarians is to give you the facts you need to make informed decisions. But I can't help reflecting that many of us are better at taking care of others, including family members like Tulip, than we are at caring for ourselves. Who knows? Perhaps Tulip will end up saving your life by helping you quit smoking.

Research shows that secondhand cigarette smoke increases the risk of two of the most common kinds of cancers in cats: lymphoma and squamous cell carcinoma. The risk is especially high in cats because they inhale and also ingest the cancer-causing substances in tobacco smoke.

As you smoke, cigarette toxins settle on the furniture and floor. When Tulip dozes there, the toxins cling to her fur, and she ingests them when she grooms. To make matters worse, Tulip undoubtedly spends all her time in your smoky home, whereas you can get away for hours every day.

Research shows that lymphoma risk increases with the number of smokers in the home, the quantity of cigarettes smoked and the years of exposure to tobacco smoke. Even with aggressive chemotherapy, median survival time for cats is only six to nine months.

Squamous cell carcinoma is the most common oral cancer in cats. The tumors most often develop beneath the tongue, likely because the cancer-causing chemicals and other irritants accumulate there during grooming. Tumors also arise on the gums and in the back of the throat.

Without treatment, most cats die within four to six weeks. Even with aggressive therapy, fewer than 10% of cats with squamous cell carcinoma survive for one year.

You already know that smoking increases your own risk of disease and makes your clothing and hair smell bad. Another good reason to stop smoking is that you'll help prolong Tulip's life.

Q My veterinarian recommends a medication to kill ticks on my dog, Barney, but I can't see what harm they do since they don't make him itch like fleas do. Why does Barney need a tick preventive?

A You're right that ticks don't cause itchiness like fleas. Ticks inject a local anesthetic when they bite so the dog or human being bitten won't feel the tick and remove it.

But while the tick is attached, it can regurgitate harmful bacteria, viruses, protozoa and even fungi and worms into its host. The Centers for Disease Control and Prevention reports that in the U.S., ticks transmit 77% of all vector-borne diseases in humans.

Fortunately, not all ticks are infected, but those that are can spread Lyme disease, ehrlichiosis, anaplasmosis and many other diseases that would zap Barney's energy and appetite, cause pain and damage his joints and organs.

So follow your veterinarian's guidance, and start a tick preventive. The Companion Animal Parasite Council recommends that all dogs receive year-round tick control because "ticks transmit a wide variety of disease agents to pets and people and are active throughout the year."

Options include a product applied to the skin, a chewable tablet or a collar. Most tick preventives also kill fleas. Many products applied to the skin additionally repel mosquitos, those annoying insects that spread heartworms. Your veterinarian can advise you about the best choices for Barney.