Park, trail projects carrying on in Fayetteville despite virus 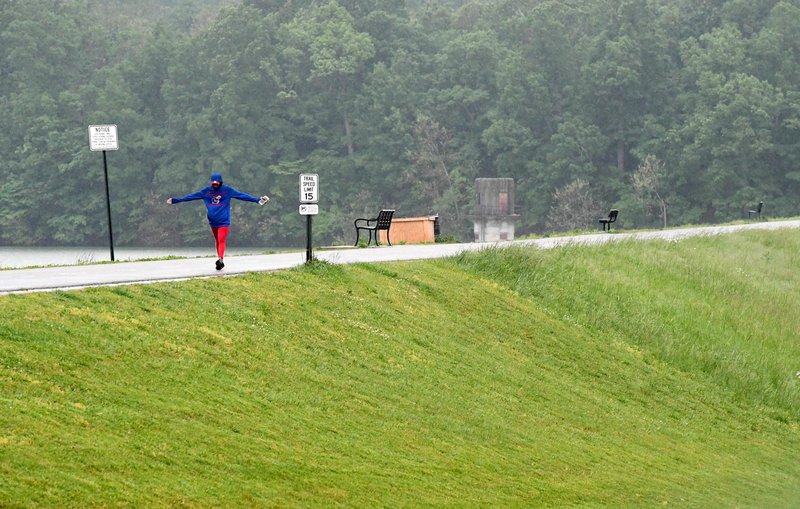 A pedestrian walks Monday along the trail across the Lake Fayetteville dam. The city is planning a redesign of the trail and is applying for a grant from the state Department of Transportation. Go to nwaonline.com/2005045Daily/ for more images. (NWA Democrat-Gazette/J.T. Wampler)

FAYETTEVILLE -- Work is progressing on a number of park projects, even if certain amenities are closed and people have to stay 6 feet apart, parks and recreation advisory board members heard Monday.

A redesign of a stretch of the most frequently used trail in the city's network is in the works. A 1,938-linear-foot section of the Razorback Greenway across the Lake Fayetteville dam would be widened from 12 feet to 16 feet. The plan is to divide the path, with 8 feet for pedestrians and 8 feet for bicycles.

The pedestrian half would have a rubber surface, with the other half being a concrete, two-way path for bicycles. The trail is deteriorating after 16 years of heavy use, said Matt Mihalevich, trails coordinator.

The city counted the number of users at that section of trail last spring. The counts showed 1,376 users per day, or 41,280 per month. Use split fairly evenly between bicyclists and pedestrians.

The City Council on April 21 gave the green light to apply for a federal matching grant through the Arkansas Department of Transportation Recreational Trails Program to build the redesigned trail section. Estimated cost is $550,000, with the grant covering 80%, or $440,000, and the city paying for 20%, or $110,000. Money for the city's portion will come from the capital improvements program for trails.

Construction also will include conduits for lighting, Mihalevich. The widening will happen on the lake side, and there's potential for more seating than there is now, he said.

"If we get this grant, we're planning to come back with more specific details like that," Mihalevich said. "But first we need to apply for the money."

The city has received the grant money for another popular piece of the Razorback Greenway. The 10-feet-tall by 10-feet-wide tunnel beneath the North Fulbright Expressway will get an elevated flooring for the 685-foot length of the tunnel. A side channel will carry seeping water to a storm drain on the north side, where it will be routed to Scull Creek. Total project budget is $110,000, with the grant from the Recreational Trails Program covering $88,000 and the city's portion being $22,000.

"This has probably been the No. 1 requested thing I get from trail users," Mihalevich said. "It's not the nicest part of the Razorback Greenway, when you get splashed with water and everything."

Trail use overall in the city has spiked because of covid-19, Mihalevich said. City officials have been trying to encourage residents to get outside while also practicing safe distancing behavior, he said.

"I think we're striking a pretty good balance with it overall," Mihalevich said.

Board Member Keith Tencleve praised city staff for continuing on with its work, which is providing much-needed relief to residents.

"Imagine what life would be like for our citizens right now through this covid situation without our trails," he said.

Fayetteville’s parks and recreation advisory board on Monday accepted donation of a .4-acre lot from the Hampton Property Owners Association as an additional access point to Rodney Ryan Park.

Parks Director Connie Edmonston said there is no timetable yet on opening amenities such as playgrounds, courts and restrooms. Those park features have been closed to the public since late March as a way to help prevent the spread of covid-19.

Youth recreation programming also is on hold. Edmonston said the city is waiting to hear guidance from the Governor's Office before resuming any programs. The earliest any program likely could resume is July, she said. Parks officials are trying to come up with some programs children could participate in online for next month.

The reopening of park amenities will have to happen in a slow rollout, when it does, Edmonston said.

"I kind of envision them coming on a few at a time," she said. "We wouldn't open up everything just like normal."