State revenue down by 28.3% last month 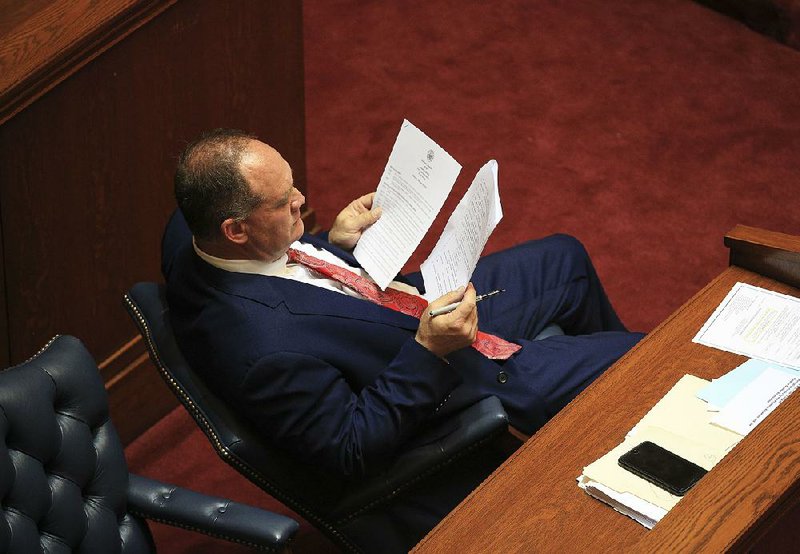 FILE - Sen. Jimmy Hickey, R-Texarkana, looks over appropriation bills that senators voted on at the state Capitol during the Legislature’s fiscal session in 2018.

Arkansas' general-revenue tax collections in April plummeted by $270.9 million -- or 28.3% -- from the same month a year ago to $687.8 million, but exceeded the state's forecast, which was revised because of the economic impact of the coronavirus pandemic, according to a report released Monday.

April typically is the month in which the state collects the largest amount of general revenue because the deadline for filing and paying individual income taxes is April 15.

But Gov. Asa Hutchinson extended these state deadlines this year to July 15 to coincide with the federal government's extension of its income tax deadlines, because of the pandemic.

Individual income and sales and use taxes are state government's two largest sources of general revenue.

Just a year ago, the April collection set a record -- $958.8 million -- according to Whitney McLaughlin, a tax analyst for the state Department of Finance and Administration.

"It was difficult trying to determine what behaviors is going to be in this new environment and so we believe it has taken a little longer for it all to start being seen," said Larry Walther, secretary of the finance department.

"A lot of what we collect in April was actually from March activity, so we will expect [the May report's] numbers that will be more indicative of what the economy has turned into from covid-19 virus," he said.

The extension of the state's individual income tax filing and payment deadlines -- coupled with an expected economic slowdown from covid-19 -- led the finance department on March 23 to cut the projection for general-revenue receipts in fiscal 2020 from $7.05 billion to $6.69 billion and the net general-revenue budget by $353.1 million to $5.38 billion. Fiscal 2020 ends June 30; the new income tax deadline falls in fiscal 2021.

In a March 26-28 special session, the Legislature authorized the creation of a covid-19 rainy-day fund with $173 million in surplus funds to fill state budget holes and cover unexpected needs tied to the coronavirus.

Tax refunds and some special government expenditures come off the top of the total general revenue, leaving a net amount that state agencies are allowed to spend.

According to the finance department, April's general revenue included:

There was one fewer Friday payday in April compared with a year ago, "so that was just another factor thrown in there," said John Shelnutt, the state's chief economic forecaster.

Collections from individual income tax returns and extensions fell by $192.5 million from a year ago to $45.2 million, but that exceeded the forecast by $45.2 million.

Since the state moved its deadline for individual income tax filings and payments, "we assumed nobody would file," Walther said. "Forty-five million dollars came in from that, so that was unexpected."

Collections from estimated individual income tax payments dropped by $9.4 million from a year ago to $46.4 million and fell $2.8 million short of the forecast.

• A $5.5 million, or 2.8%, drop in sales and use tax collections from a year ago to $194.5 million that fell $3.6 million, or 1.8%, below forecast. These collections reflect collections in April based on consumers' purchases in March.

The retail sales collections increased by 4.5% in April over a year ago because "we got the benefits of stocking up [by] retailers," Shelnutt said.

But "accommodation and food services, which is restaurants, [was] down 28%," he said. "Motor vehicle portion of sales tax [was] down 18.6%, so there was offsetting."

"We had a very good collection last year and we thought it would come down off of that," said Shelnutt.

But he said the corporate income tax collections exceeded the forecast in April "because of past activities being reported now in corporate payments, so it is a look at the past helping us out now."

The drop is largely because Oaklawn Racing Casino Resort in Hot Springs and Southland Casino Racing in West Memphis are paying a lower tax rate under constitutional Amendment 100 approved by voters in November 2018.

Oaklawn, Southland and the Saracen Casino Annex in Pine Bluff -- located across the street from the Saracen Casino Resort under construction -- have been closed since mid-March and the casino taxes remitted to the state in April are based on gambling in March. No casino has been authorized yet in Pope County by the Arkansas Racing Commission.

Projected casino and gaming revenue in fiscal 2020 totals $37.1 million, but that includes $5.7 million in electronic games of skill tax collected in July 2019, which does not count toward the $31.2 million cap that general revenue has for casino taxes, McLaughlin said.

Under Act 416 of 2019, casino gambling revenue above $31.2 million will be diverted to the state Department of Transportation, which will be guaranteed a minimum of $35 million a year from casino revenue, a restricted reserve fund or other sources.

The money is part of a plan to raise more money for highways and roads, which includes a gas and diesel tax increase and increases in registration fees for electric and hybrid vehicles that became effective Oct. 1, 2019.

The latest general-revenue forecast would provide $5.68 billion for that budget and leave $212.2 million unfunded. On April 2, the finance department cut the fiscal 2021 forecast for net general revenue available to state agencies by $205.9 million to $5.68 billion, citing an expected recession from the pandemic.