Taming the chaos: Arkansans rediscovering how profound the little things can be during pandemic confinement 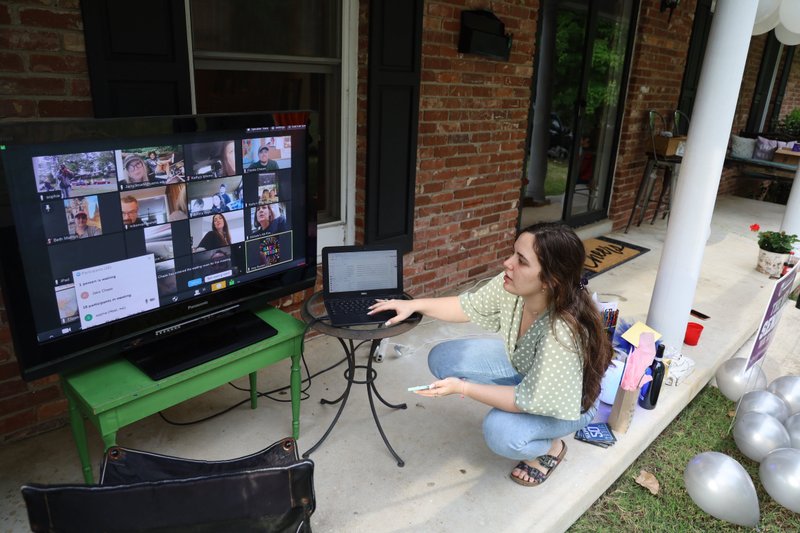 Sophie Mammarelli connects well-wishers via Zoom for her mother's birthday party, one way the family has tried to achieve some normalcy in the age of coronavirus. (Special to the Democrat-Gazette/Dwain Hebda)

The dining room table sits silent and sturdy in the center of Paul and Cris Mammarelli's Little Rock home. It's rough-hewn and heavy and that's a good thing considering its constant and shifting duty as workspace, homework area, laundry platform, dining spot, entertainment center and gathering place for six.

"We've always been close. It just feels like Sunday every day with everybody home," said Anna Mammarelli, 15. "It's been different adjusting to always having everyone home and not being alone, but I like being with everyone."

The Mammarelli household, which also includes Sophie, 18, and Stella, 10, wasn't ever a quiet one, but the buzz of activity was generally of the in-transit variety, shuttling between work, church and extracurricular activities. The sudden stoppage of movement brought on by covid-19 was, each admits, a shock to the system.

The family's existence is one shared throughout Little Rock, around the state and across the nation. It's a situation unprecedented in the lives of most Americans and one that will likely shape behavioral, professional and health aspects of life for years to come.

Ken Clark, marriage counselor and founder of Chenal Family Therapy, said the wider impact of this confinement won't likely be fully realized for some time. Right now, he said, for every family brought closer by stripping away distractions and commitments of overloaded schedules, there's at least one family caged up with underlying, long-neglected concerns.

"The effects of being put in the same space together are going to magnify whatever is there," he said. "So, a relationship that's already strong is probably going to get stronger out of this. A relationship that is struggling, which I believe is more relationships than not, is going to do worse."

Clark said prolonged close proximity peels down to the bedrock of relationships, good and bad. In homes with unresolved problems, this drives people to behaviors that replace the escape routes and defense mechanisms they lost through work or activities.

"Whether it's retreating to the far ends of the house or watching Netflix alone or burying my face in food or drinking too much, the coping mechanisms, the attempt to solve the problem becomes the problem," he said. "If I drink because I cannot hear my wife tell me one more time if we just had more money we would have replaced this carpet, I'm replacing how I ran away to work every day."

Not all coping mechanisms are drastic or self-destructive, but they exist in some form in every household, Cris Mammarelli attested. She said dealing with everything from filling the hours to fears over health has taken some work.

"That's been a learning-as-we-go," she said. "Even though we all feel like it's going OK, we can handle this, you can't help but get a little bit stressed out about it and be a little bit unsure about it. Then everybody's emotions run high. We try to find moments when it's calmer, but even when it builds up and blows up, it still gives us that chance to see where the pieces fall and what we need to work on and what we can learn from each other."

Or, as Stella put it, "We don't fight as much as we used to because we are near each other more and we're with each other all day. We've learned to get along."

As Director of Family Life for the Catholic Diocese of Little Rock, Elizabeth Reha routinely meets with engaged couples preparing for marriage. As musical director for Our Lady of Good Counsel Church, she conducts choir rehearsals and plays at Sunday Mass. Both of these routines evaporated nearly overnight as public Masses were suspended in mid-March and her office's operations were curtailed. Even one of her next-door neighbors left to live with relatives until things levelized.

"As an extrovert, it's been a challenge because extroverts get their energy from other people," Reha said. "So, when that is challenged, I have had to look for other opportunities.

"Some of what I choose to do is distraction; I've been working on my patio garden, planting tomato plants and watching some seeds start to pop out of the ground. That has been a cheery part of my life. Using outside as a distraction, you also see your neighbors across the way and you can chat with them ever so briefly from the distance."

People like Reha who live alone are subject to their own brand of confinement stress, Clark said, and activities are critical for keeping one's mind engaged and maintaining mental health. Without that, he said, people tend to retreat into self-medication, especially as the situation wears on. Thus, the sharp increases in U.S. alcohol spending — Nielsen research reported national sales for the week ending March 21 were 55% higher than in 2019 — doesn't surprise him.

"Most bad chosen human behavior exists at the crossroads of two emotions, hopelessness and exhaustion. You know, 'It's never going to change and I'm tired of trying,'" he said. "Whether it's somebody relapsing into substances, somebody giving up on their diet or somebody injuring themselves in a permanent kind of way, it's usually the nexus of those two things.

"Now, both of those are probably false narratives, but in this environment, it's really hard to challenge those notions."

Reha said she has also found solace in serving others such as donating groceries to the church food pantry or caring for her neighbor's cats. Knowing she's doing something for someone, even if they are not present, helps give her a feeling of connection to the outside world.

"I find it very peaceful to find some type of order in the middle of all this disorder. I think all of us are looking for ways to have some control," she said. "I have this family I know where they both were working in the food industry, so I chose to go to the grocery store and buy them $50 worth of groceries. They were very appreciative and I felt better knowing they were not starving and their children were being taken care of.

"There are things that we can choose and control to make our lives make sense and to not be overwhelmed by negativity. There is peace in your heart when you know you have somehow tamed the chaos."

'ALL SCARED TO DEATH'

"Well, my brother went to war," she said. "My daddy was a warden on our street, and he had to walk the streets every night and make sure people had the lights turned down in their house because they were afraid we were going to get bombed. Of course, we were all scared to death, I was just a kid.

"But, I've never really heard of anything like this. It's bad all over the world."

Elders may be the most vulnerable of all to the negative effects of isolation, especially those who live alone, are not mobile or who have no family members locally. Uth has seen both sides of this picture up close.

"When I lived in my apartment and didn't have anybody but my dog there, I kind of would get lonely," she said. "When it got to the point where it was not feasible for me to stay there ... [my family] kept looking around until they found this place. They got me out here and I've loved it ever since."

John Montgomery, executive director of the community, said administration and staff paid renewed attention to several key areas of mental and emotional health since locking down in March. Technology, while generally seen as less personal, has actually proved invaluable in that effort, he said.

"One of the many changes that have come through covid-19 has been our need to be creative while still offering the basic tenants for everyday life," he said. "I think we are tremendously blessed to have the technology we have; we have iPads circulating through our activities department and our social department. We have set up avenues to communicate and technology has been key in that."

Uth is a prime example, keeping the blues at bay through her iPhone and the iPad her family gave her on her last birthday.

"On the front of that is a devotional every morning when I open it up and I have enjoyed that," she said. "I'll listen to music on it, I'll listen to news and I've always been a reader. I love to read books and now I'm trying to get some books on it. So, I just keep myself busy like that."

Montgomery also said the administration has found ways to blunt the disruption of daily routine — a key source of stress for senior citizens — by involving them in some of the decision-making.

"A lot of people, especially elderly people, love routine and when you mess up their routine, they will grab you by the shirt collar and say 'What is going on here?'" he said. "Since we started educating them, telling them what's going on, they've been great.

"And, they've actually been pretty instrumental in thinking of new ways to do things such as bingo from the hallway and Facetime with loved ones. Some of them have gone from being not very technical to knowing the iPhone better than I do."

Asked what he thought would go higher post-pandemic — the birth rate or the divorce rate — Clark is resigned to answer the latter. But he's also quick to point out the lessons of covid-19 aren't entirely of the gloom-and-doom variety. In fact, he said, coronavirus may be the most liberating and empowering thing many people have ever experienced.

"The biggest positive that I've seen is our ability to blame ourselves for this rare moment in history is shifted off us," he said. "If you're a business owner and your business fails in this environment, it's not on you. You didn't fail. You simply couldn't outrun the tidal wave. At this point, Ken and his wife are having great marital relations; as it turns out, it doesn't matter if I have six-pack abs or not.

"Interpersonally, just enjoying each other where we're at is being rediscovered as opposed to feeling the need to impress each other. There's a genuineness in that, I think, and it's a beautiful moment in that sense."

Back at the Mammarelli household, the family sits down to a board game, laughing and playfully heckling one another. Not every room in the house is magazine-cover tidy and not every moment is jovial. Some days, the best they can look forward to is a trip to a restaurant drive thru or a walk around the neighborhood. But these simple things are what's within reach and so that's what they cling to. Along the way, Paul said, they've rediscovered how profound the little things can be.

"It's been a really good reset for me on two levels," he said. "At the family level being a father, but also being a husband, the timing was perfect. To get focused again and get back into some things I was neglecting through working, coaching and whatever else I do, I've really gotten the most out of the opportunity.

"I thank God that at least out of all this sadness and what we're all dealing with, I've been able to take something really positive away from it."