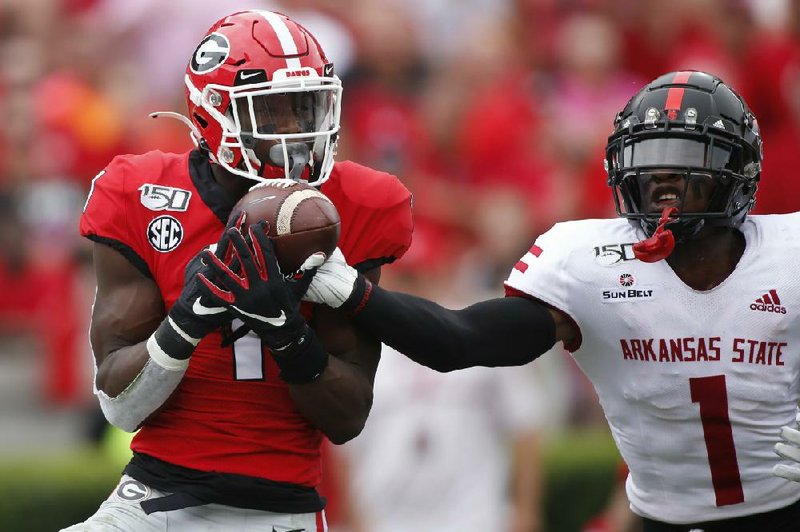 Jerry Jacobs has seen the play over and over. Too many times to count.

The play last season that tore the anterior cruciate ligament in his right knee. The play that, ultimately, ended one career and set in motion the beginning of another.

Jerry Jacobs at a glance

Noteworthy Besides football, Jacobs also played basketball, baseball, lacrosse and ran track in high school. … After high school, he played in junior college at Hutchinson (Kan.) Community College under Coach Rion Rhoades, who is now Arkansas’ linebackers coach. Arkansas Coach Sam Pittman also coached at Hutchinson in the early 1990s. … In 12 games at Hutchinson, Jacobs had 4 interceptions, 12 pass breakups, 6.5 tackles for loss, 39 tackles and was a 2017 all-conference selection. … In 16 games at Arkansas State, Jacobs tallied 4 interceptions, 10 pass breakups, 4 tackles for loss and 52 tackles. He was a second-team All-Sun Belt Conference selection in 2018. … Has experience at both cornerback and safety. … Has a second year of eligibility remaining because he didn’t play in more than four games in 2019 as a result of his injury.

"I watch that video at least five times a day," Jacobs said. "That changed my life."

On first and 10 from midfield, Georgia quarterback Jake Fromm scanned down the middle on a play-action pass. His receiver, George Pickens, glided deep on a post route with big-play potential and just enough breathing room between him and Jacobs to tempt a throw.

But by the time the ball reached Pickens, Jacobs was leaping in the air from behind with his right arm extended, blanketing Pickens and reducing his ability to haul in a catch that would have set up the Bulldogs inside the red zone. The ball grazed Pickens' fingertips, then fell to the ground, as did the two players.

From afar, it looked like a routine sequence between a receiver and a cornerback. But something was clearly wrong as Jacobs lay on the ground grabbing his right knee.

"When that happened, I didn't even feel it," Jacobs said. "I just came down, and I tried to get back up and I couldn't."

It was the final play of Jacobs' Arkansas State career. It was Sept. 14 -- the third game of the season -- amid more than 90,000 fans at Sanford Stadium in Athens, Ga.

Jacobs' new head coach at the University of Arkansas, Sam Pittman, knows the scene well. He was standing on the opposite sideline that day as Georgia's offensive line coach.

The setting wasn't unfamiliar to Jacobs either. His high school was less than 90 miles to the west at South Cobb, which is just northwest of downtown Atlanta. His second-oldest sister, Kimberly, is a University of Georgia graduate. Jacobs had attended a couple games at Sanford Stadium before and had spent plenty of time in Athens with his sister in years past.

Kimberly, along with more than a dozen other of his family members and friends, were there that day last September. They came to see Jacobs play on the big stage in his home state. They left with the memory of watching him lay on the field with trainers surrounding him early in the second quarter.

"I could not enjoy the rest of the game," Kimberly, 33, said. "I knew immediately when he didn't come back on, after maybe the third or fourth play, I knew something was wrong."

Looking back now, it's distinctive what's changed since then.

The conference that Jacobs has switched to was right in front of him that day. His future head coach was watching nearby.

Pittman, a longtime offensive line coach, has taken over in Fayetteville, spearheading the rebuild of a struggling program desperate for a turnaround. Pittman brought in five graduate transfers this offseason, including Jacobs, who's been fully cleared since early March in what was a rather speedy recovery from ACL surgery.

Jacobs, a 5-11, 206-pound versatile defensive back and early enrollee this spring, has two years of eligibility remaining and can play immediately.

"I'm just happy just to be here," Jacobs said, "because I always dreamed of being at the Power 5 level."

It's been a gradual climb to get here, and even before a football career ever became a possibility, it was a road filled with personal challenges.

Jacobs' mother, Alice, died of pneumonia when he was 11. His father, Jerry Sr., was rarely in his life growing up. Jacobs, who's 22, said he hasn't seen his dad in years and that the two don't keep in contact.

Without parents present at home, Jacobs and his four siblings had to become a tight-knit unit and stick together. Jerry is the youngest of the five.

His two oldest sisters, Tomeka -- who was raising three kids of her own -- and Kimberly, helped guide and support him, his other sister, Jasmine, and his brother, Kevin. Jerry is especially close with Kimberly and views her as a motherly figure.

"I just [saw] them grind to make our life better. Just seeing that, it was just like, 'Man, I got to go make it. I got to get them everything they want,' " Jacobs said. "And they don't even want that. They just want to see me successful, like see me graduate college and see stuff like that. I just told them, like, 'You don't want it, but you got to get it, because some people who were in your shoes would have folded.'"

The family didn't fold. They all stuck together under the same roof as they grew up in the Atlanta area and supported each other. Jerry was the final sibling to graduate high school, and by that point, he had turned into a talented, but still raw, football player.

With only a handful of offers from smaller schools, Jacobs first had to go prove himself at the junior college level. He landed in central Kansas at Hutchinson Community College. Pittman, Jacobs' new head coach, once coached there in the early 1990s.

In Hutchinson, the Arkansas River flows through the town. The tributary's southeast path to get to the state of Arkansas is long and winding, much like what Jacobs' football journey has evolved into and where it's led him.

He redshirted his first season at Hutchinson in 2016, but by his second year, he had fully grabbed the attention of his head coach, Rion Rhoades. In 2017, Jacobs tallied 4 interceptions, 12 pass breakups, 6.5 tackles for loss, 39 tackles and he was an all-conference selection.

"You could just feel a strong desire to be great. He was really hungry," said Rhoades, who in a twist of fate has reunited with Jacobs at Arkansas after being hired by Pittman to coach linebackers.

"I just remember [in a game] him breaking on a throw, catching a pick on a flat route, put his foot in the ground, caught it, took it back for a touchdown. That kind of confirmed everything that we had thought about him -- like this guy can be special and make some pretty elite plays."

After Hutchinson, Jacobs moved onto a Division I opportunity at Arkansas State. In his first season in Jonesboro in 2018, he quickly asserted himself as one of the team's best defensive players, recording 4 interceptions, 8 pass breakups, 3 tackles for loss and 31 tackles. Jacobs was a second team All-Sun Belt Conference selection.

There were high expectations for another big season in 2019, but it was cut short three games in with his injury.

Over the next few months, something began to change inside of Jacobs while rehabbing his knee. Detachment from playing the game and being with the team day in and day out led to some thinking. He had never thought he'd leave ASU. He loved it there, and he loved ASU Coach Blake Anderson, a man he referred to as a "father figure."

But by the time the Camellia Bowl rolled around in December, Jacobs admitted that "the vibe" was different for him and that he was considering exploring his options.

"I didn't feel I should've stayed there another year," Jacobs said. "I'd graduated [in December], so I was just like, man, why not? Let's see if some more schools [are] gonna really be interested, with two years [of eligibility left]."

In early January, not long after the Camellia Bowl, Jacobs entered the transfer portal. On Jan. 10 -- 20 days removed from the Red Wolves' victory over Florida International in Montgomery, Ala. -- he was already announcing where he'd play next.

The Razorbacks, with a new head coach in Pittman and a staff that featured a familiar face in Rhoades already in place, were onto Jacobs early, and the defensive back reciprocated with the belief that Arkansas provided the best fit.

"I just felt like they wanted me more than anybody," Jacobs said.

During his national signing day news conference Feb. 5, nearly a month removed from Jacobs' decision, Anderson was plenty forthcoming when asked how surprised he was that Jacobs left.

"Surprised? Not very. Disappointed? A lot," said Anderson, who noted then it was the first time in his ASU tenure he'd lost a graduate transfer. "I felt like it was in his best interest to stay put and finish his career here. I think the data at the NFL would tell you the same thing, but he chose to go on his own and do his own thing."

Jacobs will now be able to see both sides.

Now? There's no mistaking where his allegiance lies.

He was just getting adjusted to his new home and team in Fayetteville earlier this spring before the coronavirus pandemic took hold and changed everything.

Now he's back home in Georgia living with Kimberly, continuing to train in preparation for a comeback season and a fresh start in the mighty SEC.

"I'm just really proud of him," Kimberly said. "From his upbringing, not having his father in his life, losing my mom at a young age, it hasn't been easy, and he's dealt with it the best way he could. I'm just proud of the decisions he's made and where he is at at this point in his life."