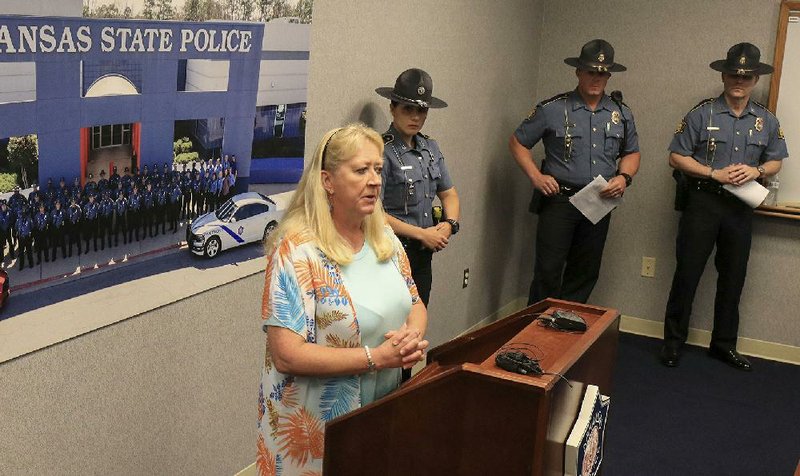 Anita Campbell, the sister of Ervin Brendel, speaks Tuesday at Arkansas State Police headquarters in Little Rock about her brother’s death. It’s believed that Brendel died after being struck by a vehicle while he was running along the highway near U.S. 70 and Harris Road. Campbell’s family and the state police are asking for help to solve the case. (Arkansas Democrat-Gazette/Staton Breidenthal) ( Arkansas Democrat-Gazette / Staton Breidenthal)

A mirror found at the scene where a vehicle fatally struck a North Little Rock man is among the sparse evidence that the Arkansas State Police has in the hit-and-run case, investigators said Tuesday.

Investigators say the passenger-side mirror has helped them narrow down the possible make and model of the vehicle that hit Ervin Brendel, 51, as he jogged along U.S. 70 on April 21, according to investigator Nick Brown.

[Video not showing up above? Click here to watch » https://www.youtube.com/watch?v=Dfph1CnNymY]

"We did recover a passenger mirror from the vehicle at the scene," Brown said. "That mirror has led us to believe that it came off a vehicle no newer than a 2006 GMC product like a utility vehicle -- so it'd be a Yukon, Denali, Cadillac Escalade -- some type of GMC product that's a sports utility vehicle."

Brendel died between 7 p.m. and 8 p.m. on the highway near Harris Road, according to investigators. Brendel was an avid and accomplished runner, according to Anita Campbell, his sister.

"He was a marathon runner," Campbell said. "He did all the marathons since 2012. He's got many, many medals, that I didn't see them all until the other day."

Brendel ran every day, according to Campbell, but not usually as early as he did on the evening he died. Investigators did not find his body until the next day.

The vehicle that hit Brendel will be damaged on the front passenger side, according to Brown, and might have a missing mirror although that may have been replaced by now. Investigators believe that, because of some leads they have, somebody has information about the accident that they have not told police.

"Due to the leads in this investigation, we believe someone knows something or maybe multiple people know some things about this case," Brown said. "We ask that you come forward please."

Campbell also urged that anyone with information in the case step forward so that her family can find closure about what happened to her brother.

"Please call a hot line and just say something, anything," Campbell said. "We're looking for pieces to puzzles, and we have nothing -- not much. And the person that's responsible, just come in and talk to the police, tell them your side of the story and just get it off your shoulders."

"Tell your side of the story" was a phrase echoed by police. When asked about potential charges that the driver could face, Lt. Stacie Rhoads, criminal investigation commander for Troop A, said she couldn't address that without first hearing the driver's side of the story.

Police reviewed security footage from the businesses surrounding the area but could not discern the exact make and model of the vehicle, according to Rhoads.

"We've collected surveillance video from a lot of the businesses that are in that area," Rhoads said. "Unfortunately, a lot of it is really grainy so we cannot make out the vehicle color."

While not seeing much success in the investigation so far, Brendel is pervasive in Campbell's thoughts.

"He loved running," Campbell said. "That was his life, and I know right now he's in heaven running the streets of gold."