NFL foreign games moving back to US 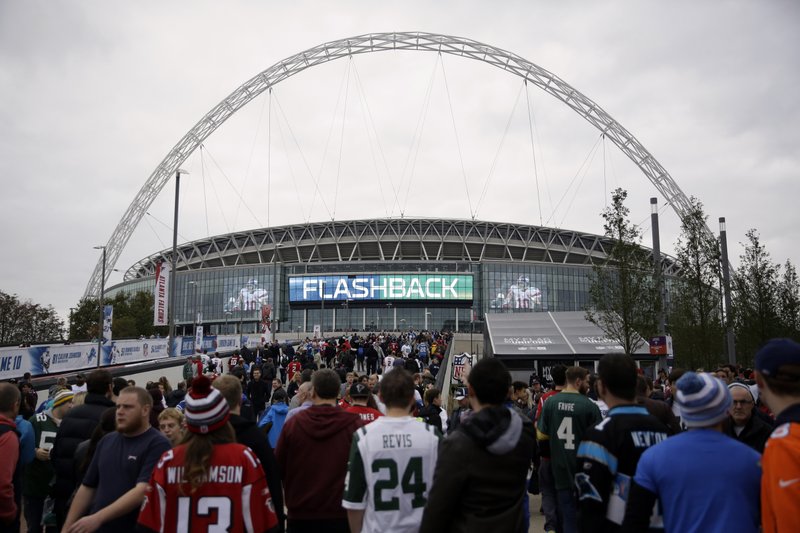 FILE - In this Oct. 26, 2014, file photo, sans arrive at Wembley Stadium before an NFL football game between the Atlanta Falcons and the Detroit Lions in London. The NFL is moving its five games scheduled for London and Mexico City this season back to U.S. stadiums because of the coronavirus pandemic. All five regular-season games will now be played at the stadiums of the host teams. (AP Photo/Matt Dunham, File)

The NFL is moving its five games scheduled for London and Mexico City this season back to U.S. stadiums because of the coronavirus pandemic. All five regular-season games will be played at the stadiums of the host teams.

Scheduled were two home games for the Jacksonville Jaguars at Wembley Stadium in London and two at Tottenham's new facility, with the Atlanta Falcons and Miami Dolphins as hosts. The Arizona Cardinals were to be the home team for the game at Azteca Stadium in Mexico City.

Opponents had not been announced.

The NFL said in a statement Monday that "in order for the entire season to be played in NFL teams' stadia under consistent protocols focused on the well-being of players, personnel and fans ... Commissioner Roger Goodell made this decision after consultation with our clubs, national and local governments, the NFL Players Association, medical authorities and international stadium partners."

The NFL has staged regular-season games in London every season since 2007. Since 2013, the Jaguars have hosted one game there each season.

"While the NFL's many fans in London, the U.K. and Europe will obviously be disappointed by this news, it is absolutely the right decision to ensure the safety of everyone involved in the sport," London Mayor Sadiq Khan said. "I know that the NFL remains fully committed to London and I look forward to welcoming NFL teams back to the capital in 2021."

"After considerable analysis, we believe the decision to play all our games domestically this season is the right one for our players, our clubs, and all our fans in the U.S., Mexico and U.K.," said Christopher Halpin, an NFL executive vice president. "We greatly appreciate the support of our governmental and stadium partners in Mexico and the United Kingdom, who all agree with this decision, and we look forward to returning for games in both countries in the 2021 season."

The league is set to release the full schedule Thursday night and is planning on adhering to it, though contingencies are being discussed as a safeguard against the pandemic.

Print Headline: NFL foreign games moving back to US