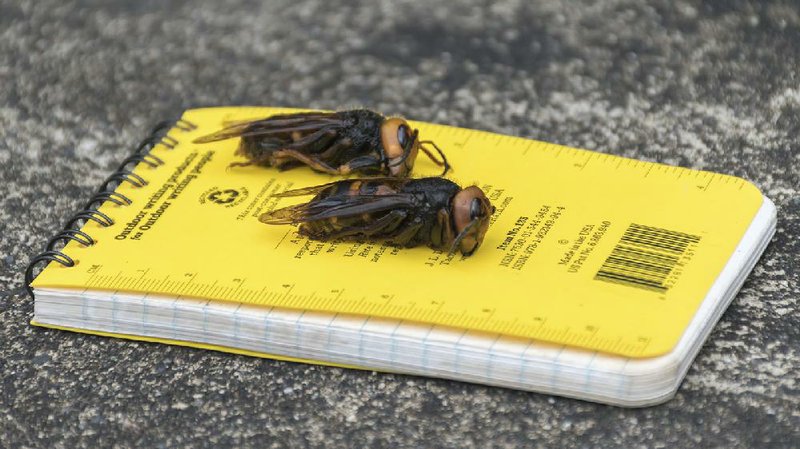 The Asian giant hornet -- aka the "murder hornet" -- isn't in Arkansas, where residents have confused it with other hornets that have been in the state for at least a couple of centuries, a bee expert says.

"Our extension agents have been inundated with telephone calls for four days," Jon Zawislak, an apiary expert and entomologist at the University of Arkansas System Division of Agriculture, said Tuesday. Some of the calls have come from beekeepers concerned about their livelihoods or hobbies, he said.

"There is no really accurate way to predict right now," Zawislak said of the Asian hornet's potential arrival in Arkansas. "I doubt we will see them, but if we do, it will be years and years from now, but you never know."

The hornet's nickname helped lead it to an outsized presence on social and traditional media over the weekend, particularly after The New York Times reported on the effort in Washington state to eradicate the hornet and eliminate its threat to honeybees. (In October 2013, the Times also reported that "swarms of giant hornets" had killed 42 people in Shaanxi Province and injured more than 1,600 in several months' time. The newspaper cited Xinhua, the official news agency in China.)

"I don't like that nickname," Zawislak said. "People are already anxious and nervous enough."

Zawislak said the Asian giant hornet is being confused with the European hornet and the bald-faced hornet, both of which are common in Arkansas.

The Asian hornet, for one, lives up to its billing as the world's largest: its queen can be slightly longer than 2 inches, or at least a half-inch larger than the European hornet.

Because few people are keen to take such measurements, the difference in colors is a better guideline. The European hornet has yellow and black stripes "that are a bit irregular" while the Asian hornet's stripes are "yellow-orange and in a very straight band," Zawislak said.

The European hornet also nests in trees, mainly in limbs but also in any cavities, Zawislak said.

The Asian giant hornet lives in underground nests that they build themselves or in nests built, then vacated, by rodents or other animals.

The Asian giant hornet also, at least for now, lives in lowland forests or in the foothills of low mountains. "They don't seem to like wide-open plains, and we've got the Great Plains between us and the Rockies," Zawislak said. "That serves as a pretty good barrier."

The European and the Asian giant hornet also differ in their threat to bees.

The Asian giant hornet attacks colonies by swarm, Zawislak said. The European hornet "will swoop down and get an individual bee," Zawislak said. "We call it 'hawking,' much like a hawk goes after its prey."

Both the European and bald-faced hornets also are beneficial, especially to gardeners, because they eat unwanted pests, Zawislak said.

Earlier Tuesday, Zawislak posted an essay of several hundred words about the hornet on his blog, which was then shared by beekeepers across the state on several platforms.

He noted that invasive species are nothing new to Arkansas, which has had its share of problems brought on by kudzu, bamboo, the boll weevil, the Asian carp, the emerald ash borer and the rice nematode, among others.

"Once established, invasive species are notoriously hard to stop because they have escaped their own natural enemies, which tend to keep their populations in check in their native territory," he wrote.

"There is typically a very narrow window of opportunity to recognize an emerging threat, and to act quickly enough to eradicate it before it becomes widespread. But an effective response requires a concerted effort between scientists, citizens and multiple levels of government agencies cooperating efficiently."

The same, he said, will be needed in Washington state.