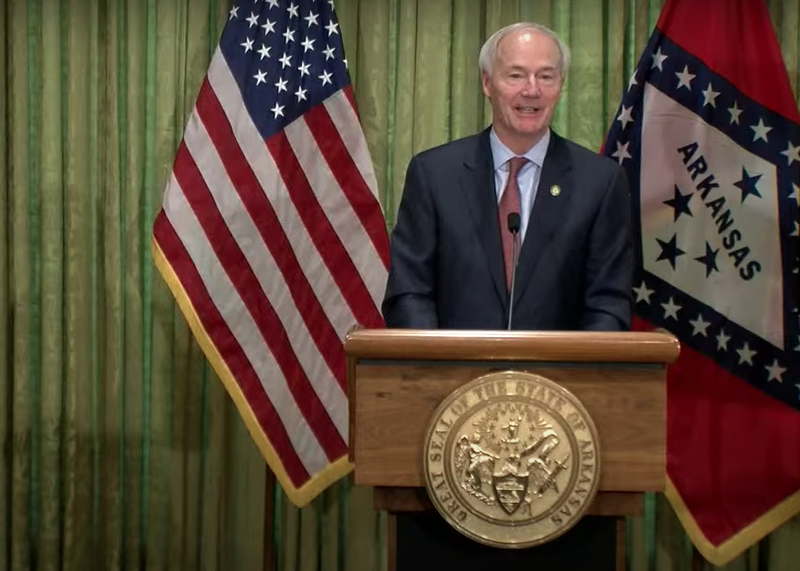 Arkansas Gov. Asa Hutchinson speaks to reporters at a Wednesday briefing in Little Rock in this screen grab of video provided by the governor's office.

The state will be receiving 90,000 covid-19 test kits from the Centers for Disease Control and Prevention in May, Gov. Asa Hutchinson announced Wednesday, as the state hopes to increase testing this month to an average of about 2,000 a day.

Hutchinson also announced two more Arkansans have died of the virus, bringing the toll to 85.

Testing in April averaged around 1,000 per day for most of the month, Hutchinson said, before rising to around 1,500 near the end of the month when the state announced its “surge” campaign intended to increase testing.

In May, the state is hoping to perform 60,000 tests. The kits from the federal government will help, Hutchinson said, though the state is still awaiting its first shipment.

Hutchinson said the kits will be received by the Department of Health and distributed across the state based on need and demand.

He said the number of cases in those places aren’t necessarily high relative to the rest of the state but rather the number of positive cases are increasing at a concerning rate.

Statewide, Smith said the total number of cases was 3,568 as of Wednesday including 1,374 active cases in which a patient remains ill, rather than recovered or deceased.

Smith also reported additional cases at the federal prison in Forrest City, bringing the total of infected inmates there to 301.

The number of reported coronavirus cases in Arkansas crept up overnight by two, for a total of 3,527 Wednesday morning, according to the state Department of Health.

Deaths from the virus remained at 83 on Wednesday, while 2,092 people had recovered, the agency reported.

Gov. Asa Hutchinson will speak on the state's response to covid-19 at 1:30 p.m. Watch live below.

[Video not showing up above? Click here to watch » https://www.youtube.com/watch?v=I87nVE1PqPU]