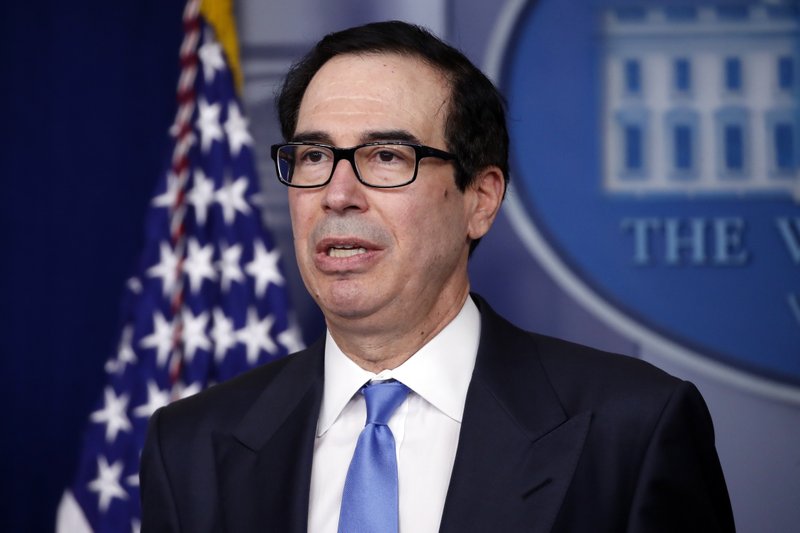 WASHINGTON -- More than 40 public companies are pledging to return money to the government's small-business coronavirus fund now that Treasury Secretary Steven Mnuchin is threatening criminal prosecutions for violating the rules of the program.

The administration has given companies until May 14 to give back money without penalty as President Donald Trump's administration tries to ensure the $600 billion-plus emergency lending program helps small employers preserve jobs in an economy that's shedding them at a staggering rate.

The challenge is considerable. The Small Business Administration is pushing out unprecedented federal assistance at a rapid clip, but the pace of the program has raised questions about how thoroughly applications are vetted.

"You've got to do it both efficiently and responsibly, and it's hard," said James Thurber, a professor of government at American University who founded its Center for Congressional and Presidential Studies. He said Mnuchin "is using the bully pulpit to scare companies."

Questions about the loans have led Mnuchin, a chief architect of the rescue plan, to take on the role of enforcer. He spoken of criminal prosecution and warned companies they must reimburse the Treasury Department if they falsely certified that they needed federal aid to operate and could not get it elsewhere.

The Small Business Administration also says it will audit every loan exceeding $2 million and that if problems are found, it will withhold the program's offer to forgive the loan.

"So anybody that took the money that shouldn't have taken the money, one, it won't be forgiven, and two, they may be subject to criminal liability, which is a big deal," Mnuchin said in an interview on the Fox Business channel.

According to the data analytics company FactSquared, 42 public companies had agreed as of Wednesday to return loans totaling $337.1 million. None explicitly mentioned the possibility of criminal prosecution as a reason for their decisions.

In his warning, Mnuchin is probably leaning on a section of the U.S. criminal code that's been used to prosecute companies and individuals for making false statements to federal agencies. Among those who've felt its sting are homemaking tycoon Martha Stewart and former Illinois Gov. Rod Blagojevich.

A recent Associated Press investigation found that at least 147 public companies received $555 million of the potentially forgivable loans. Some had market values well over $100 million, and many had executives earning millions annually.

National restaurant chains -- Shake Shack, Ruth's Chris Steakhouse and Potbelly Sandwich Shop -- are among those that have committed to returning their loans. In securing the money, the chains had used an exception in the law allowing hotel and restaurant companies with more than 500 employees to receive help if they have fewer workers than that in any one location. All three said they could get money elsewhere.

Other companies aren't giving up the money quietly. They blame the administration for what they call shifting and confusing rules.

The Small Business Administration and the Treasury Department issued new guidance on April 23, after the program was underway, stating that publicly traded companies with substantial market value and access to private sources of credit probably would not be certifying accurately that they qualified.

Ashford Hospitality Group and BK Technologies, a maker of two-way radios, criticized the Treasury Department for the revised guidelines. They said they believed they qualified under the original rules, before the revisions created "uncertainty" and "confusion." So they said they were returning the money out of "an abundance of caution."

Other companies are keeping their money. Biolase, a maker of dental lasers that has not reported an annual profit since 2003, said that "given the current economic situation," it doubts it could raise money in a stock sale to make up for lost revenue. As a company with 150 employees, well under the maximum of 500 that's allowed, Biolase believes it qualifies for the loan of just less than $3 million that it received.

"The PPP [Paycheck Protection Program] was essential in helping maintain Biolase as a viable business moving forward," the company said in an emailed response to an AP inquiry.

Some legal experts are skeptical of Mnuchin's threat of criminal penalties. They say it is not a good way to recover taxpayer money that may have gone to big, deep-pocketed companies because of the government's own missteps.

Stephen Gillers, a professor at New York University Law School who specializes in government ethics, said criminal punishment of companies "isn't a promising route" for recouping money that may have been distributed as a result of the government's incompetence.

"Any prosecution would have to prove that the recipients understood what the government was really asking with an ambiguous question and intentionally gave a misleading answer," Gillers said.

The small-business program opened with $349 billion on April 3. The money was exhausted in less than two weeks. Congress replenished the program with $310 billion for a second round starting last week.

Rep. Nydia Velazquez, D-N.Y., who leads the House Small Business Committee, said she welcomes more scrutiny of the loans. But she said the administration shoulders some of the blame for the problems.