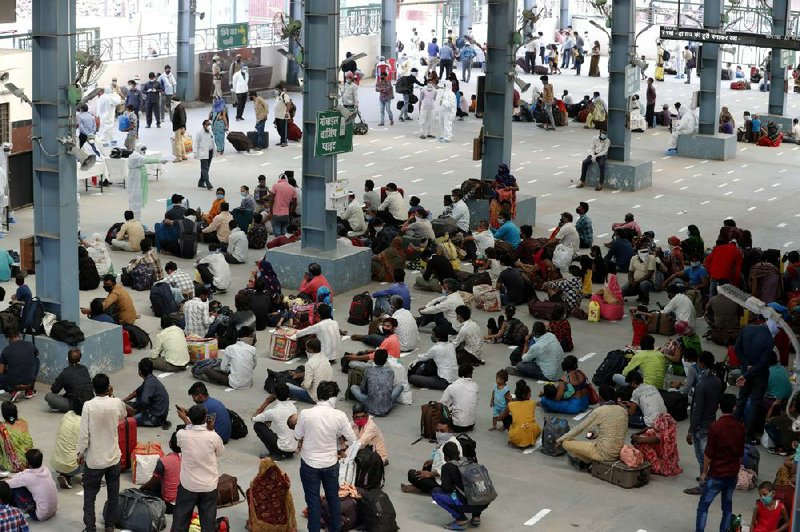 Migrant laborers, who arrived from Gujarat state on a train, rest in Prayagraj, India, before proceeding to their villages Wednesday. (AP/Rajesh Kumar Singh)

PRAYAGRAJ, India -- Thousands of jobless Indian migrant workers arrived by train in their home state Wednesday after the government eased a lockdown imposed March 25 to fight the coronavirus pandemic.

Two trains arrived in the northern town of Prayagraj in Uttar Pradesh state from Surat, a diamond manufacturing hub in western Gujarat state. Two more trains were to follow later in the day.

The stranded workers lost their jobs under the lockdown, and were living in shelters and relief camps organized by the state government and charities. After more than 50 days, the government began running special trains after workers clashed with police in Mumbai, India's financial capital, and Surat over the past two weeks.

India's Labor Ministry said it still doesn't know the total number of workers stranded across the country, although it ordered a count early last month, the Press Trust of India news agency reported.

The data was sought by an activist from the Commonwealth Human Rights Initiative who said a large number of migrant workers were affected by the lockdown, causing immense economic hardship.

THESSALONIKI, Greece -- Protesting locals stopped asylum-seekers who relocated from congested Aegean island camps from reaching new accommodations in northern Greece and set fire to a hotel where they were supposed to be housed, Greek authorities said Wednesday.

Police said about 150 protesters prevented buses carrying 57 people taken to the mainland from the eastern island of Lesbos from reaching a rented hotel at a village in the northern region of Pella, and set fire to a room on the hotel's ground floor.

No injuries or arrests were reported. Greece's coronavirus lockdown allows public gatherings of only up to 10 people, who must observe social distancing.

The buses were rerouted to another village in the Pella region, where protesters had sent up roadblocks to prevent them being housed in a local hotel. The group was eventually driven to the northern city of Thessaloniki, where they were put up in a local hotel.

Smaller protests also occurred at a hotel in the northern region of Kilkis, where 250 asylum-seekers from Lesbos were being taken.

JOHANNESBURG -- The fight against tuberculosis stands to be set back by more than five years because of the coronavirus pandemic, risking an additional 1.4 million TB deaths and 6.3 million infections by 2025, a new report says.

The Stop TB Partnership is a Geneva-based international body leading the global fight against the respiratory illness that infects more than 10 million people annually.

Data from three countries with high TB prevalence -- Kenya, India and Ukraine -- was used for the new report. Kenya is among the countries with the highest TB burden in the world with an estimated 558 people in every 100,000 infected.

In extreme cases where lockdowns last up to three months, the study estimates that it might take up to 10 months to restore TB services to normal levels.

"We are looking with amazement at how covid-19 has been around some 128 days but already has about 100 candidate vaccines," said Stop TB executive director Lucica Ditiu. "The new agenda is vaccines and treatment for covid-19. Nobody is talking about vaccines for HIV, malaria or TB."

The fighting poses a significant challenge to efforts by Sudan's transitional government to end decades-long rebellions in some areas of the country, including Darfur. Rebel groups from Darfur and other areas have for months engaged in talks with the transitional authorities to establish peace in Darfur and elsewhere in Sudan.

Adam Regal, a spokesman for a local organization that helps run refugee camps in Darfur, said the violence started when a group from the Falata tribe robbed sheep herders from the Arab Rizeigat tribe in the town of Rumali, leading to fierce clashes between the two tribes.

Sudan is on a fragile path to democracy after a popular uprising led the military to overthrow longtime autocratic President Omar al-Bashir last year. A military-civilian government now rules the country.

Prime Minister Abdalla Hamdok said in a statement that the fighting, which started Tuesday and continued Wednesday, has since subsided.

Local authorities have imposed a round-the-clock curfew in the area and deployed more troops to stabilize the situation in the region, said South Darfur's Gov. Hashim Mahmoud.