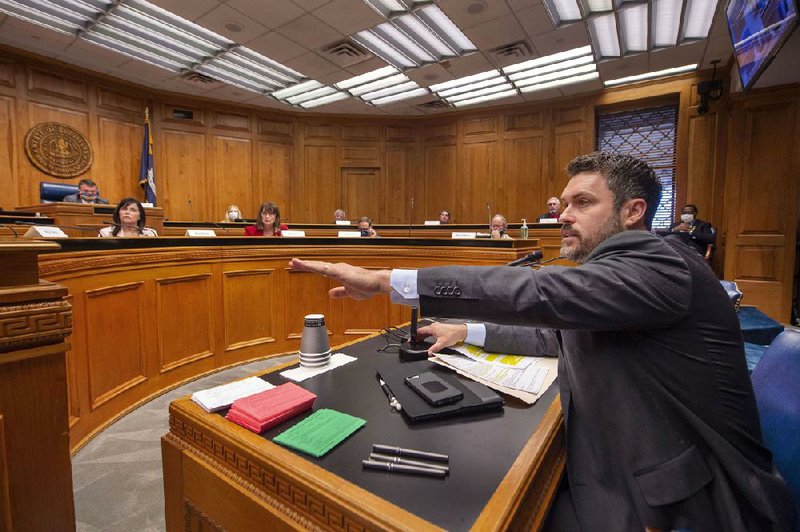 Edwards' decision to extend his stay-at-home order through May 15 provoked criticism from Republicans who prefer a parish-by-parish approach to loosening restrictions that have shuttered businesses and driven up unemployment.

In a rebuke to Edwards, the House and Governmental Affairs Committee voted 9-7 to advance a proposal from House GOP leader Blake Miguez that would strip the governor, for 15 days after its passage, of his ability to penalize businesses that don't comply with his order. The vote was a near party-line decision.

That means closure requirements for bars, theaters, gyms, salons, tattoo parlors and more; bans on sit-down restaurants; and limits on public gatherings of more than 10 people at churches and elsewhere couldn't be enforced by Edwards during that time.

"The intent of this is to take the teeth out of his emergency order," said Miguez. "We've flattened the curve. Now it's time to start looking at reopening the economy."

The effort would have to win support from the full House and Senate before taking effect. And it could be moot within days.

Edwards said Wednesday that he's "hopeful" he'll lessen the restrictions and enter the first phase of the White House's reopening guidelines on May 16. The governor said he'll announce his plan Monday based on the latest data.

"We obviously know the importance of keeping the economy open," Edwards said.

Republicans appeared to be trying to force his hand.

"I'm ready to throw this thing in the trash if the governor does what's right," said Miguez, who worked on the legislation with Republican Attorney General Jeff Landry's office.

While the governor couldn't require businesses to follow the stay-at-home order under Miguez's legislation, mayors and parish presidents still would be able to enact their own restrictions if they feel it's too soon to reopen in their areas.

Opponents said the legislation dismissed public health and safety in one of the nation's early hot spots for covid-19, the disease caused by the coronavirus. They said Edwards extended his stay-at-home order in consultation with infectious-disease specialists as some regions showed troubling increases in virus cases. And they said the proposal would create widespread uncertainty in neighboring municipalities with different restrictions.

"We've got people dying, and this is going to cause mass confusion and chaos ... for political points and grandstanding," said Democratic Rep. Jeremy LaCombe.

"They have been close partners with Louisiana throughout," Block said.

Miguez's legislation is less far-reaching than an idea circulated by Rep. Alan Seabaugh, a Republican proposing to use a legal maneuver -- a petition requiring support from a majority of the House or Senate -- to override the governor's disaster orders entirely.

Seabaugh's proposal has run into concerns it could put in jeopardy hundreds of millions in federal aid for businesses and for virus-related state spending.

Several GOP lawmakers who support Seabaugh's petition suggested Miguez's proposal doesn't go far enough. They questioned whether Louisiana's fire marshal would try to enforce the stay-at-home order even if the governor can't do so directly. They complained about applying crowd size limits on churches. And they bristled at a state website for people to report business violations of the restrictions.

"Are we in Nazi Germany? I mean seriously," said Republican Rep. Dodie Horton. She added: "People just need to be able to decide for themselves how to function."