Uniform schedule at risk for colleges 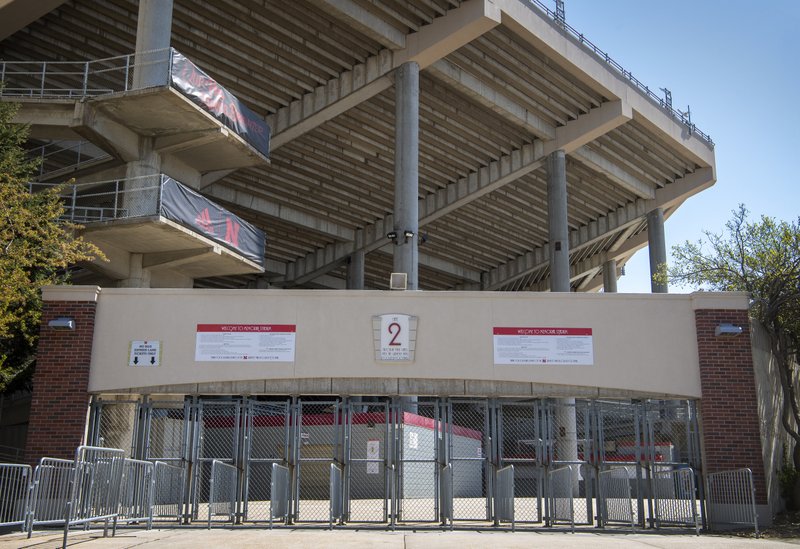 FILE - In this Saturday, April 18, 2020, file photo, Gate 2 at Memorial Stadium is empty because the annual Red-White matchup was cancelled due to the coronavirus pandemic. The goal is for all of major college football _ 130 teams in 10 conferences across 41 states _ to start a season at the same time and play an equal number of games. It is becoming more apparent the coronavirus pandemic is going to make that goal difficult to achieve. (Francis Gardler/Lincoln Journal Star via AP, File)

There are 130 major college football teams spread across 41 states and competing in 10 conferences, save for a handful of independents.

The goal is to have all those teams start the upcoming season at the same time -- whether that's around Labor Day as scheduled or later -- and play the same number of games.

With each passing day, it is becoming apparent the coronavirus pandemic is going to make that goal difficult to achieve. Despite the best intentions of conference leaders, the possibility exists of college football being played in SEC country before it begins in Pac-12 territory -- or something else entirely.

"I can't say enough about the extent to which they're working closely together, spending time together, communicating with each other," Notre Dame Athletic Director Jack Swarbrick said. "And I think that's the most important thing. It gives us a chance to come up with an overarching policy and an ability to start together.

"Having said that, I think we all recognize that there is a significant chance that that may not be possible."

The coronavirus is affecting different regions of the country in different ways, prompting a wide range of responses to fight the spread and revive economies.

Some states such as Georgia and Florida already have begun to reopen businesses. Others such as California and Washington are going more slowly. Where that leaves them all four months from now is hard to predict, and the uncertainty is reflected across college sports.

College sports leaders have repeatedly said there can be no college sports without campuses being open to students. And those decisions will be made with guidance from state and local public health and government officials. Tennessee came out Wednesday with perhaps the most definitive statement yet from a school about reopening in the fall.

The NCAA football oversight committee has agreed on a six-week plan for teams to prepare to start the season. Teams would ideally be on campus by mid-July for the season to start on time.

Beyond that, the NCAA has little influence on the logistics of college football. The conferences are mostly in charge, with commissioners leading the way.

The commissioners of the Atlantic Coast Conference, Big Ten, Big 12, Pac-12 and SEC say they have been in almost constant contact since the NCAA Men's Basketball Tournament was canceled on March 12.

"Based on the very positive and close collaboration among the leaders in college football and discussions with schools, other leagues and the medical community, at this point in time we are planning to start the football season on time and together on a national basis," Pac-12 Commissioner Larry Scott said.

But can that plan hold?

An interview SEC Commissioner Greg Sankey did last week with a Jacksonville, Fla., radio station became a headline when he said: "There is room for different conferences to make different decisions." In an interview with the Big Ten Network, Commissioner Kevin Warren suggested something similar.

Penn State Coach James Franklin wondered whether schools within the same conference would be uniform in their return to play.

In an interview with the AP on Tuesday, Sankey noted the importance of nonconference games the SEC has scheduled such as Arkansas at Notre Dame, Colorado at Texas A&M and Southern California vs. Alabama in Arlington, Texas.

"There is a motivation to remain connected," Sankey said of the Power 5 conferences.

He also said if a small number of schools cannot play, it might not stop everyone else.

"What's the critical mass? I don't have that number. I don't think there is a need to predict that now. In fact, I don't even have to answer that now because we have an asset of time," Sankey said.

Notre Dame is a member of the ACC for most sports, but one of six independents in major college football. The Fighting Irish hold unique status, with their own multimillion-dollar television contract with NBC for football. Swarbrick is part of the College Football Playoff management committee along with the 10 Bowl Subdivision conference commissioners.

Swarbrick said a lack of uniformity could make it impossible to have a normal season.

"How many games do you need to have in a regular season to have a playoff?" he said. "What might a re-engineered schedule do to the postseason and the bowl games? What about records? What about Heisman trophies? Is a team whose schools decides it can't participate credited with a forfeit? I hope not."

Swarbrick said he has encouraged conferences to consider, if necessary, a scheduling model for a truncated season that allows teams to protect traditional nonconference rivalries such as Florida-Florida State and Clemson-South Carolina.

"But I'm not concerned about our ability to have a challenging, robust schedule even if the conferences go to a conference-only model," he said.