TAKEOUT TASTINGS: Get your motor running with 6 more dining options 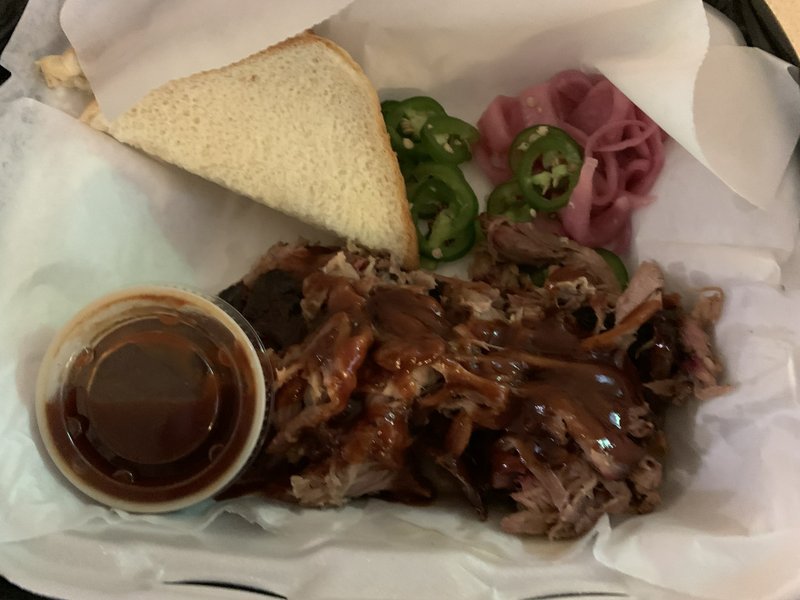 Man does not live by bread alone. So add some pulled pork with barbecue sauce, pile on some lean corned beef or smother a biscuit with a little gravy and you've got a meal.

As some restaurants are making plans to reopen their dining rooms as early as next week, most will continue to depend on takeout and delivery as the center of their operations for some time to come.

Here are some of our recent takeout experiences. We've concentrated on locally owned establishments; as has been our practice, we pay for all meals upfront and are living by our recommendation to tip adequately or even generously.

WHAT WE GOT: We ordered what is probably our favorite @ the Corner item for Sunday brunch: the Chicken & Waffle ($13), house-fried chicken tenders topping a fairly fluffy waffle and garnished with berries — since it's strawberry season, medium-size, uber-sweet Arkansas-grown strawberries, plus butter and syrup, packed in separate plastic cups. (The Hot Chicken & Waffle, $15, with sausage gravy, Cheddar cheese and "house hot sauce," is also an option.)

HOW IT WENT: We ordered and paid online via the "Shop Now" tab on the Facebook page and followed the instructions on what time we should expect our order to be ready. We got there, exactly on time, and joined a queue of cars (and a few bikes) along Scott Street awaiting curbside pickup; we had about a 10-minute in-car, in-line wait as the staff was literally dashing from car to car and in and out of the restaurant to fetch orders. Ours came neatly packed in a large paper bag via a masked member of management. A large cup of the restaurant's pretty good coffee was a bargain at $3.

HOW IT'S GOING: @ the Corner has been a very popular weekend brunch establishment with, when online dining was allowed, very long lines of people waiting outside just to get inside; the long line of cars waiting for pickup shows not much has changed, at least on the weekends.

HOW IT WENT: We placed our order by phone and it was ready when we got there about 20 minutes later. The server/bartender donned a mask and gloves at that point to hand us the black plastic bag. The two side items came in separate small plastic bowls; the pork came with some sauce already on it and a small cup of additional sauce to be applied at our discretion, but we didn't feel we needed it.

HOW IT'S GOING: We spotted no other customers or to-go orders waiting on other customers. We're told that when the Rail Yard reopens, it'll be for outdoor dining via food truck and Count Porkula takeout first, which has always been its primary modus operandi.

WHAT WE GOT: The reuben ($9), consisting of corned beef and sauerkraut on marble rye (you can substitute turkey), plus regular chips. We've been eating at EJ's off and on for decades, from the time they opened in a funny-shaped space on Kavanaugh Boulevard in Hillcrest. Their reuben sandwich features thinly sliced corned beef (though not New York deli thinly sliced corned beef, but then, not even Oaklawn does that) piled high with generous portions of sauerkraut and "special sauce" (the standard recipe calls for Thousand Island dressing, which this resembles). We didn't see any Swiss cheese, which is supposed to be a reuben component. The juice from the kraut and dressing soaks into the marble rye, making the sandwich kind of sloppy if it sits for even a short period of time — for example, the several minutes it waited for us to pick it up and the several more minutes it took us to get it home. Each half of our takeout sandwich was individually foil-wrapped, which helped reduce the overall sog. EJ's was pretty much the first place in town to do house-made chips and theirs are still among the best — crisp, crunchy and well-drained.

HOW IT WENT: We placed our order by phone, and gave the restaurant the 20 minutes; it was ready, bagged and waiting for us upon our arrival. Our server was not wearing either a mask or gloves.

HOW IT'S GOING: Our order was sitting among several others for customer pickup and for third-party delivery. The restaurant is using the down time to almost completely remodel the interior, including rebuilding the bar, so there are no plans to reopen for dine-in service any time soon.

WHAT WE GOT: Jager Schnitzel ($15.95), a breaded pork loin (pan-seared is an option) in a rich mushroom sauce, served over spaetzle, a pasta/dumpling cross; truffled deviled eggs, a longtime favorite (four halves/two eggs for $5.75, $10 a dozen). The schnitzel was delicious with just about half the mushroom sauce (separately packed); we should probably not admit this, but we consumed the remainder as a sort of glorified mushroom soup. The kitchen whips the egg yolks with truffle oil for a lingering flavor and squirts the mixture out of a pastry bag into the hard-boiled whites, then garnishes each half egg with a small parmesan crisp for flavor and to add a bit of crunch. A small plastic cup kept the four half-eggs separated in the foam clamshell.

HOW IT WENT/HOW IT'S GOING: We ordered and paid by phone for curbside pickup; the parking lot on a Saturday night was a constant process of cars pulling up, masked and gloved servers bringing orders out and thrusting them through car windows, and cars departing.

WHAT WE GOT: Fried Chicken Livers ($10), with brussels sprouts, tso sauce and white rice. This was our first visit to South on Main since Don Dugan and Tasha Stratton bought it from founder Matt Bell (who has taken over a hotel kitchen in Nashville, Tenn.) in late January and promoted Matt Verch from sous chef to executive chef. It won't be our last. Bell had chicken livers on the menu — "perfectly deep-fried (so that the batter outside is crunchy-crispy and the livers inside the batter are moist and flavorful)," as we noted in a September 2013 review, "served with soubise (a French onion-bechamel sauce to which Bell has added maybe a little mustard) over thin, contrastingly sweet apple slices." Verch has taken that another step toward the exotic by adding a spicy tso sauce and brussels sprouts and serving it all over rice in an aluminum pan. The chicken livers are less crunchy and it's hard to tell in the sauce what's a chicken liver and what's a brussels sprout, but the dish is delicious and we'd order it again.

HOW IT WENT/HOW IT'S GOING: We placed our order by phone and paid for it on premises; it wasn't quite ready when we arrived, but that gave us a chance to chat with Dugan and a neighboring business owner about what, if any, would be the prospects for eventual full-service reopening. The dish was still hot when we got it home, a trip of about 10 minutes.

WHAT WE GOT: For Sunday breakfast/brunch, the Country Breakfast ($10.49), two eggs, choice of meat (ham, sausage, or in our case, bacon) and hash browns, plus a biscuit and gravy. Everything was first-rate, from the practically salt-less eggs done nearly perfectly over medium, the bacon very crispy, the hash browns golden, the biscuit fresh and fluffy and the separately packed gravy just the right consistency. The foam clamshell packaging involved folding the eggs and bacon in one layer of wax paper, adding the hash browns on top of the fold and putting the biscuit in one rear chamber and the gravy cup in the other. It was all still hot and fresh-tasting within the five minutes or so it took to get it home. Breakfast, which used to shut off at 11 a.m., is now an all-day option.

HOW IT WENT: Leo's is set up for call-in/curbside pickup, but we actually walked in and placed our order, then sat comfortably on the patio for the 10 minutes it took to prepare.

HOW IT'S GOING: The place has been staying moderately busy. Several cars came and went for pickup orders while we waited.