Phone call before dawn starts day that shaped generations by Michael E. Ruane The Washington Post | May 8, 2020 at 3:35 a.m. 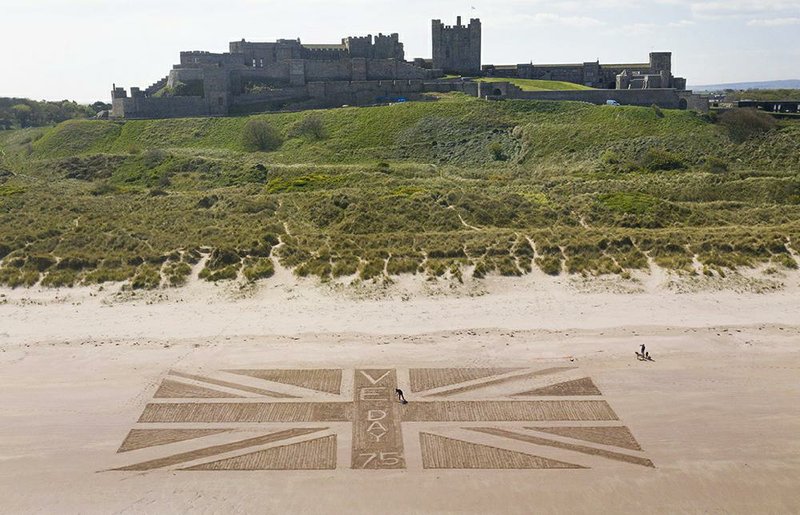 Andrew Heeley, a maintenance manager at Bamburgh Castle at Northumberland on the northeast coast of England, sculpts a giant United Kingdom flag on the beach Thursday ahead of today’s commemorations of the 75th anniversary of the Allied victory in the war in Europe. More photos at arkansasonline.com/58veday/. (AP/Owen Humphreys)

The phone on Gen. Omar Bradley's bedside table rang at 4:45 a.m. He sat up and turned on the light. He had a pistol by his pillow, and the windows in his quarters near Kassel, Germany, were covered by blackout curtains.

Outside, under his command, more than 1 million American soldiers were fighting their way across northwestern Europe.

Bradley's boss, Gen. Dwight D. Eisenhower, was on the line, calling from his office in Reims, France.

[Video not showing up above? Click here to watch » https://www.youtube.com/watch?v=b6tRkZL4jAA]

Nazi Germany had surrendered at 2:41 a.m. The tragedy of World War II in Europe had ended.

Bradley rose, went to a map and wrote the notation "D+335" -- 335 days since Allied soldiers had come ashore at Normandy on D-Day, historian Rick Atkinson wrote.

Eleven months of bitter fighting at sites like Omaha Beach -- where the small town of Bedford, Va., lost 20 of its sons on D-Day -- and places across Europe such as Saint-Lo and Falaise in northwestern France; Bastogne in Belgium; the Dutch town of Arnhem and the vast minefield of the Hurtgen Forest near the Belgian-German border.

Eight-hundred miles of scarred landscape lay behind, marked with the graves of tens of thousands of American, British, Canadian, French and German soldiers, airplane pilots and crews.

There were more graves in Italy, around places such as Anzio and Monte Cassino, in North Africa at the Kasserine Pass, and across the scorched expanse of Russia and Eastern Europe.

All born of the war against Adolf Hitler's Germany. Hitler had shot himself in the head a week earlier, sitting on a brocade couch in the study of his underground bunker in Berlin.

"The evil doers ... are now prostrate before us," British Prime Minister Winston Churchill said the next day, May 8, the official Victory of Europe Day, or V-E Day. "We may now allow ourselves a brief period of rejoicing."

Delirious crowds jammed New York's Times Square, where a model of the Statue of Liberty had been set up. People thronged London's Trafalgar Square and the Champs Elysees in Paris, which had been freed from Nazi occupation only the previous August.

"IT'S OVER OVER HERE," crowed the military newspaper, Stars and Stripes. "GERMANY QUITS!" said the Times-News in Twin Falls, Idaho. The Philadelphia Inquirer rushed out an extra edition with a one-word front-page headline: "VICTORY."

"I only wish that Franklin D. Roosevelt had lived to witness this day," President Harry S. Truman told Americans. Roosevelt, who had led the country through all but the last few weeks of the war, had died April 12.

In Washington, Maj. Keith Wakefield of the Australian Military Mission was mobbed by celebrants when he drove downtown. "Lasses of all shapes and sizes invaded our car," he recalled later, according to historian Martin Gilbert.

"The lawns around the Washington, Lincoln and Jefferson monuments were teeming with joyous people," Wakefield wrote to Gilbert years later. "We ... joined a raucous motorcade through Rock Creek Park finishing up at the Wardman Park Hotel where we drank several toasts to fallen companions."

In Brnenec, Czechoslovakia, Oskar Schindler bade farewell to the 1,000 Jews he had sheltered from the Nazis in his factory and then fled the approaching Soviet army.

On the front lines, soldiers were numb.

For the Americans, the war in Europe had technically lasted about 3½ years, since Germany declared war on the United States on Dec. 11, 1941, four days after the Japanese attack on Pearl Harbor.

Two days before Eisenhower's call to Bradley, American soldiers had liberated the concentration camp at Mauthausen, in Austria, a few miles from where Hitler had grown up.

There, 95,000 people had been starved, gassed and worked to death in a rock quarry, and a Nazi doctor named Hermann Richter had cut out prisoners' stomachs, livers or kidneys to see how long they might live.

But now it was over.

The German general, Alfred Jodl -- who was a top aide to Hitler and was later hanged as a war criminal -- signed the unconditional "Act of Military Surrender" early that Monday, May 7. 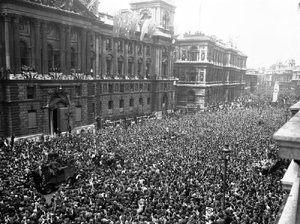 Crowds of civilians, British and Allied troops in London cheer on May 8, 1945, as Winston Churchill (second balcony from left) and members of the British Cabinet join in celebrating the end of World War II fighting in Europe. More photos are available at arkansasonline.com/58veday/ (AP)