Casinos given May 18 as date to reopen doors; Sharp County has first death 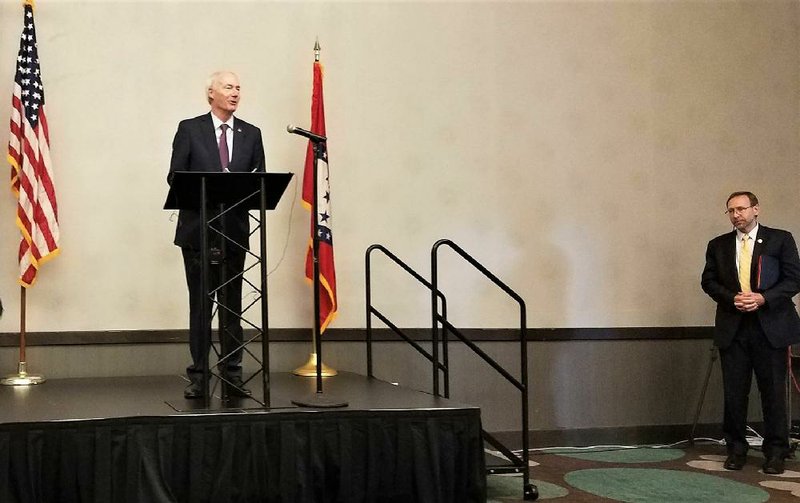 Gov. Asa Hutchinson, holding his daily briefing Thursday at Texarkana’s Arkansas Convention Center, announced that casinos will be able to reopen May 18 under strict guidelines. Health Secretary Nate Smith (right) said Robert Redfield, director of the national Centers for Disease Control and Prevention, complimented him in a call Wednesday on the state’s success in limiting the spread of the coronavirus while allowing some businesses to stay open. “He thought that that was an example for other states and something they would continue to watch very carefully,” Smith said. (Texarkana Gazette/Karl Richter)

Casinos in Arkansas will be allowed to reopen May 18, but will have to operate at a third of their capacity and with "stringent social-distancing requirements in place," Gov. Asa Hutchinson announced Thursday.

"They have presented proposals as to how they can socially distance in that environment," he said.

He said details on the precautions that would be required would be released soon.

Hutchinson made the announcement during his daily news conference on the pandemic, this time during a visit to Texarkana.

Meanwhile, a Health Department report indicated a resident of a nursing home in Ash Flat became the 88th person to die from the virus in Arkansas, according to the state's count.

It was the first death from the virus in Sharp County and the 34th virus death of a nursing-home or assisted-living facility resident in Arkansas.

The total number of cases in the state's official tally rose by 83, to 3,694, as of Thursday evening.

[Video not showing up above? Click here to watch » https://www.youtube.com/watch?v=ACFduTbkjCU]

That count still did not appear to include all the cases from an outbreak at the federal prison complex in Forrest City, where 301 inmates and 14 staff members have tested positive.

State and federal inmate cases have been added to the state's total as information from laboratory reports are entered into a database. No new cases at the prison were reported Thursday.

That was two days after Oaklawn Racing Casino Resort in Hot Springs, citing two cases in Garland County, announced that its casino would close for the rest of that month.

At the Saracen Casino Annex in Pine Bluff, the plans for reopening include requirements for employees and customers to wear masks, Carlton Saffa, manager of the casino project, said.

The casino also will turn off some slot machines and separate others with plastic-glass barriers.

Customers will have their IDs scanned so that the casino can track every customer who enters the building, he said.

"One of the great things about casinos is that we have incredible surveillance," Saffa said. "If we get a call from the Health Department about contact tracing, we stand ready to assist them."

Instead of being open 24 hours a day, the casino will close at midnight during the week and 2 a.m. on weekends to allow for more cleaning, he said.

The reduction to a third of the casino's capacity likely will mean limiting the number of customers in the building to 200, instead of the normal 600, Saffa said.

The annex opened in September, offering 300 slot machines, a sports betting kiosk and a bar and lounge while the larger Saracen Casino Resort is under construction.

The larger facility is expected to open in July, Saffa said.

In the meantime, about 200 of the casino's 300 employees have been furloughed during the closure, Saffa said.

"They're anxious to get back to work," he said.

In West Memphis, Southland Casino Racing is "targeting opening on May 18 with the limited operations outlined by Gov. Hutchinson and looks forward to welcoming back our loyal patrons," Glen White, a spokesman for the casino's owner, Delaware North of Buffalo, N.Y., said in an email.

"In the weeks prior to suspending operations, we worked to protect public health by following U.S. Centers for Disease Control and Prevention guidelines on sanitizing protocols and cleaning throughout our venue," he said.

"Our planning for reopening has been focused on a comprehensive program that features additional ways that we will help keep our guests and employees safe from COVID-19 and provide them peace of mind while they are in our facility."

Casinos were the latest industry to receive clearance to reopen under the first phase of Arkansas' relaxation of restrictions that were imposed to slow the spread of the coronavirus.

May 18 is also the date when movie theaters, arenas, bowling alleys and other large entertainment venues will be allowed to open with limitations designed to limit the risk of exposure.

At his news conference Thursday, Hutchinson noted that the state had recently seen "a little bit of an uptick" in the number of people testing positive each day.

That's still down from a high of 81 non-inmate cases that state officials reported on April 29.

The seven-day rolling average of new non-inmate cases reported each day was 46.7, up from 45.7 the previous day but still down from the peak of 66.4 on April 29.

"What that tells me is that my prediction is coming true, that while we have a downward trend, we're going to have occasions where it goes up a little bit whether it is in our prison environment, or whether it is some other areas," Hutchinson said. "That doesn't mean we're on the wrong path, but you're going to have a jagged pattern as you go on the decline."

Adding to the signs of progress, Smith said the Health Department had classified an additional 758 people in the state who have tested positive as having recovered.

That reflected the recovery of a large number of inmates who tested positive at the Cummins Unit in Lincoln County as well as an ongoing effort to classify people as recovered when 14 days have passed since they tested positive if they haven't died or been hospitalized.

After the department adjusted its previous counts under that criteria, it found that the number of active cases -- meaning people who tested positive and have not died or recovered -- has fallen from a high of 1,466 on April 25 to 710 as of Thursday afternoon.

The last time the number was that low was April 16, when 707 of the state's cases were considered active.

Smith said CDC Director Robert Redfield called him Wednesday evening and complimented him on the state's success in limiting the spread of the virus while still keeping some businesses open.

Unlike most other states, Arkansas never issued a broad stay-at-home order requiring all nonessential businesses to close.

"He thought that that was an example for other states and something they would continue to watch very carefully," Smith said.

"I was very pleased with that input, especially since, to hear some people talk, it seems like they think you have to choose between saving lives or saving the economy.

"I want to say that really is a false choice, because here in Arkansas we're doing both."

Since the previous afternoon, he said, the department had received 2,174 test results, the state's third-highest total and meeting its goal to test at least 2,000 people a day.

Of those results, 244 were from the Health Department's lab, 168 were from the University of Arkansas for Medical Sciences and 1,762 were from commercial labs.

Comparing the Little Rock metropolitan statistical area to those of St. Louis, Memphis and Louisville, economists with the Federal Reserve Bank of St. Louis noted in a report Wednesday that Little Rock had the lowest number of cases and virus-related deaths per 1 million residents as of Monday.

Little Rock also had a lower percentage of people who had died after testing positive than all the regions except Memphis.

The figure was about 3% for Little Rock; 2% for Memphis; more than 5% for St. Louis; and more than 6% for Louisville, a chart in the report indicated.

But the economists said none of the regions met one of the White House criteria for reopening a region: a downward trajectory of new cases over a 14-day period.

It said the Little Rock region's cases had grown an average of 2.52% a day over that period.

The latest virus death added to the state's count was that of a resident at Ash Flat Healthcare and Rehabilitation Center, according to a Health Department report.

Six other residents and three workers at the home also have tested positive, according to the report.

The report also indicated that two workers at Courtyard Rehabilitation and Health Center in El Dorado and one at Amberwood Health and Rehabilitation in Benton had tested positive.

That raised the number of nursing homes or assisted-living facilities where at least one resident or worker has tested positive to 47.

At the Cummins Unit, five more inmates tested positive, raising the total cases among inmates there to 881.

The number of coronavirus patients statewide who were hospitalized increased by one, to 70. Fourteen of the patients were on ventilators, a number that hadn't changed from a day earlier. 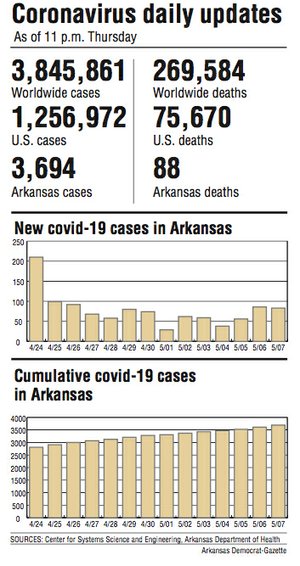 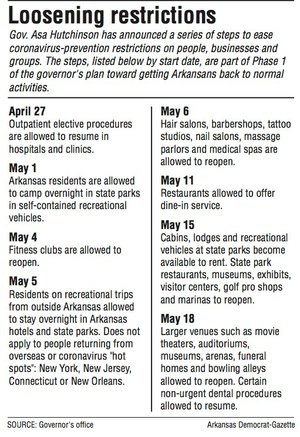