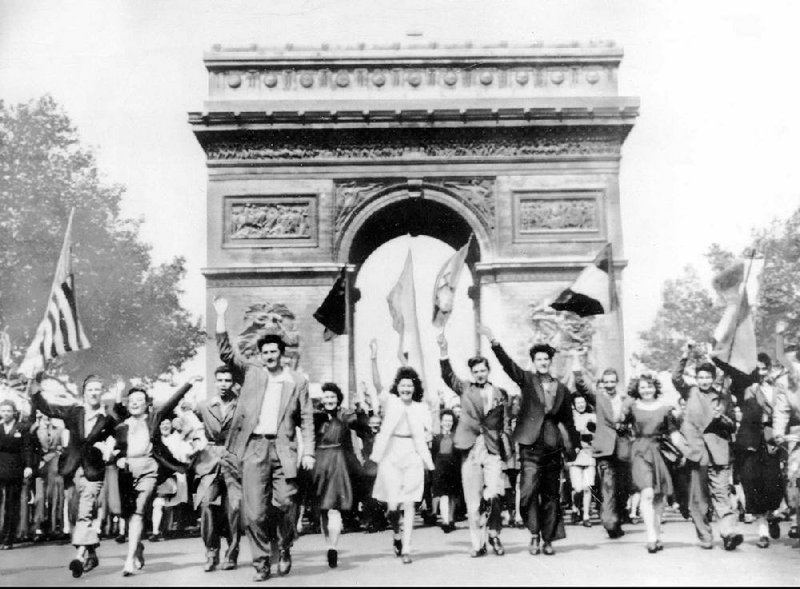 Parisians march through the Arc de Triomphe jubilantly waving flags of the Allied Nations as they celebrate the end of World War II on May 8, 1945. (AP file photo)

Only a few months before, in the summer of 1944, Alfred Jodl had to listen as Der Fuhrer screeched at him in the Wolf's Lair: Jodl, Brennt Paris? No, Paris wasn't burning--because Herr Hitler's people in France ignored his orders to blow the place. After another brutal winter, in which the Germans almost managed to pull it off, Alfred Jodl, acting for the German government, signed his name four times on documents laid before him at Reims, in northeastern France. Today marks the 75th anniversary of that day..

World War II was over. In Europe, at least.

Americans and others in the west would begin to call May 8 V-E Day. V-J Day would have to wait until August.

Most Americans, most of the world, didn't expect the war to last this long. It had been nearly a year since the Allies landed in Normandy, France, creating the two-front war that Uncle Joe Stalin wanted. Actually, it was more along the lines of a three-front war against Germany by then. The Axis underbelly in Italy proved to be anything but soft, and the Germans had to station many divisions there. (And it would until the day the war ended for the Germans.)

A reporter named Price Day, who covered the war for The Baltimore Sun, was in Reims to record the surrender. He made notes as colonels and generals and admirals made their way into the dark Allied offices (the surrender was signed before dawn) and the various visits, and times of those visits, to the brass. When Eisenhower met with Jodl & Co., it was for less than two minutes. Just long enough for the Allied supreme commander to ask if the enemy brass knew what it was signing. They said they did.

Mr. Day noticed that when the Germans came to headquarters that day, they saluted at the gates. And they didn't use the Nazi salute.

They were completely defeated.

On hearing the proposal, Ike let it be known that he was prepared to seal off the entire Western front, preventing the fleeing Germans from moving westward, and they could submit to the tender mercies of the Soviets. Jodl radioed to Grand Admiral Karl Donitz. Donitz ordered Jodl to sign the unconditional surrender of all forces. In other words, don't be a damfool.

When the news came across the wires that Germany had fallen, officially, there was dancing in the American streets. And not just American. For the British had been at this game for years before the United States joined in.

Hitler's war machine didn't just create fear, it created panic. His dive-bombers put sirens on their wings, better to scare the people below. In the first few months of the war, his generals could do no wrong. They cut through defenses like hot knives through bellies. Soviets retreated. British retreated. Poles and Frenchmen surrendered.

And years later, the Nazis were finally done for. It seemed almost impossible.

From the archives of UPI, which had a correspondent at Reims, too:

REIMS, France, May 7, 1945 (Delayed) (UPI)--Representatives of four Allied powers and vanquished Germany scrawled their names on a sheet of foolscap in a map-lined 30-by-30 foot room at 2:41 a.m. European time today and ended World War II in Europe.

In a ceremony exactly 20 minutes long, Col. Gen. Gustav Jodl, chief of staff of Admiral Donitz' government and longtime close friend of Adolf Hitler, surrendered all German armed forces on land, sea and in the air.

A high officer said almost all firing had ceased on the remaining fronts.

The actual signing took five minutes. There are four copies of the surrender document and in addition the naval disarmament order which was signed by Admiral Sir Harold Burroughs, Allied naval chief.

Immediately after signing the last document with a bold "Jodl," the Nazi arose, bowed and in a broken voice pleaded for generosity "for the German people, the German armed forces" who he said "both have achieved and suffered perhaps more than any other people in the world."

The surrender is effective one minute after midnight Wednesday, British double summer time.

Ah, yes, all the achievements of the German armed forces. Col. Gen. Jodl didn't fail to mention them. After all, there were millions of them. Some who even received decent burials. But millions of others did not.

According to UPI, the colonel general had other things to say, just for the record, after his signature blistered the documents:

"General, with this signature the German people and the German armed forces are for the better or worse delivered into the victor's hands. In this war which has lasted more than five years both have achieved more and suffered more perhaps than any other people in the world. I express the hope the victor will treat them with generosity."

And you know what? We did.

After the war, American dollars would be spent to rebuild not just Germany but Japan, too. And today both are solid allies. As solid as any.

It took a lot to get here, though. And of all the important dates over the last 75 years, May 8 is as important as any. 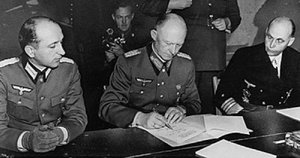 Alfred Jodl signs the German Instrument of Surrender on May 7, 1945, in Reims, France. (U.S. National Archives)