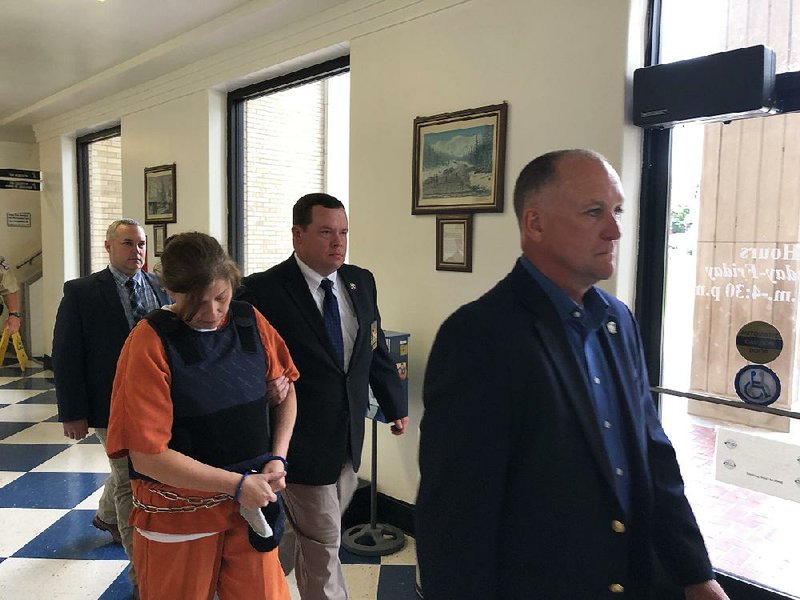 Rebecca Lynn O’Donnell is escorted out of the Randolph County Courthouse on July 30 after she was arraigned in former state Sen. Linda Collins’ slaying.

Prosecutors believe that the woman they charged with killing former state Sen. Linda Collins last year did so for monetary gain and to avoid arrest, according to new court filings.

Rebecca O'Donnell, 49, has been held without bail on charges of capital murder, abuse of a corpse and evidence tampering since last June, when she was arrested about two weeks after the former lawmaker's decomposed body was found in the driveway of her Pocahontas home.

Before last month, prosecutors had not revealed a suspected motive.

O'Donnell, also a resident of Pocahontas, was a close friend and campaign aide to Collins, according to a spokesman for the senator. O'Donnell has pleaded innocent to the charges.

Robert Dittrich, the special prosecutor assigned to the case, filed a notice with Randolph County Circuit Court on April 30 stating that the aggravating circumstances that justify the capital-murder charge include the belief that the slaying "was committed for the purpose of avoiding or preventing an arrest" and "for pecuniary gain."

O'Donnell's fiance, Tim Loggains, has stated publicly that Collins granted him power of attorney after her divorce. Loggains has not been charged with any crime, and has adamantly asserted O'Donnell's innocence.

The capital-murder charge carries the possibility of a death sentence, which prosecutors have said they intend to seek.

The Arkansas Times first reported on the new filing document, which was made available online Tuesday when it was published in the court record of a related case against O'Donnell in Jackson County.

O'Donnell's attorney, Lee Short, did not return a request for comment on the filing Friday.

In the Jackson County case, O'Donnell faces charges of solicitation to commit capital murder and solicitation to tamper with evidence for what prosecutors allege was a plot she devised to recruit other women at the county jail to help arrange for the slayings of Collins' ex-husband and his new wife along with a judge and prosecutor formerly assigned to her case in Randolph County.

O'Donnell has pleaded innocent to those charges, which her attorney called "outlandish."

Over the past month, several search warrants have been issued in the Randolph County case by Circuit Judge John Fogleman, according to court records. Two warrants have been approved to allow investigators to search a computer seized from the Rock & Roll Highway 67 Inn that had been operated by Collins, in addition to a 2011 Ford Focus owned by O'Donnell's mother.

The car is believed by investigators to contain "concealed biological evidence," according to a copy of the warrant issued by Fogleman.

The make and model are different from the car that prosecutors say O'Donnell wanted to "blow up" as part of the alleged plot conceived at the jail. Court records identify that car as a 2005 Honda Civic that belonged to O'Donnell.

Fogleman has scheduled a hearing in the Randolph County case for May 21 to address the applicability of the death penalty. O'Donnell's capital-murder trial has been scheduled for October.