Cotton growers most of all said to profit from tariff disputes by MIKE DORNING BLOOMBERG NEWS | May 9, 2020 at 1:58 a.m. 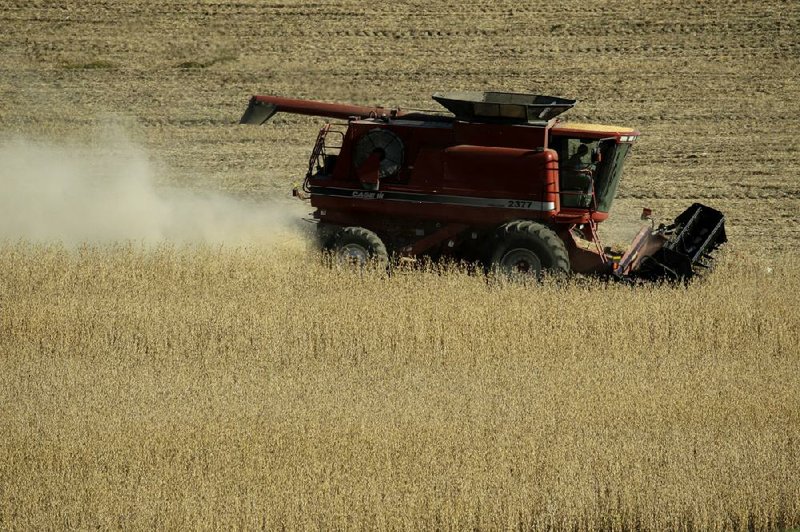 A farmer harvests soybeans in a field near Concordia, Mo., last year. (AP)

The Trump administration's $28 billion trade bailout largely overpaid farmers for their losses, with Southern cotton farmers receiving the most outsize gains, according to researchers at Kansas State University.

The payout to cotton farmers in the bailout's second round was 33 times the estimated financial impact of tariff disputes with China and other nations, according to the study, published this week in an academic journal.

The U.S. Department of Agriculture didn't immediately comment on the findings. A spokeswoman for the National Cotton Council said its estimates indicate growers were undercompensated for trade losses.

While payments exceed the tariff-related price fallout in the short run, the program may not compensate for long-run losses because of the trade conflict, the report's authors said.

The study comes as the Trump administration moves forward with a $19 billion coronavirus farm rescue package. The USDA hasn't yet disclosed how the rescue payments will be calculated, but officials have said an announcement is imminent.

Farmers and rural communities are a crucial part of President Donald Trump's political base as he seeks re-election. He has assiduously courted farmers, lavishing them with praise and boasting of the aid he has given them. Over the past year, he has mentioned farmers on average three times a week in his Twitter posts.

The study found wide differences by commodity in the relationship between trade losses and bailout payments. In the second round, when payments were larger, compensation was 1.4 times trade losses for corn, 2.4 times for soybeans, 7.1 times for wheat and 7.3 times for sorghum, according to the authors, Joseph Janzen and Nathan Hendricks, both economists at Kansas State.

The authors also compared payments to the rent farmers pay for property -- which reflect land's productivity -- and found Southern farms benefiting disproportionately. In the second round, rescue payments in the South were larger than rental rates, while in the Midwestern Corn Belt they ran about 30% of rental rates.

The study "points to the difficulties of trying to target a massive plan like this to where the losses are being incurred," said Joseph Glauber, former USDA chief economist, who wasn't involved in the study or the trade bailout.

Janzen said the discrepancies in aid payouts stemmed from the method the USDA used to predict trade losses. The agency based payment solely on projected sales losses in China and other nations engaged in tariff disputes without accounting for the inevitable rise in sales elsewhere as global trade flows adjusted.

That method undercompensated corn growers in the first round, since the crop was indirectly affected. Many farmers rotate between corn and soybeans, and corn supplies rose as soybean prices dropped.

Cotton growers were overcompensated because they have many other overseas customers that easily absorbed sales lost in China. China accounted for 16% of the value of U.S. cotton exports in 2017-18, the study says.

In the first round, covering the 2018 crop year, payouts for corn covered only about a tenth of losses, while payouts to cotton covered 7.4 times losses, the authors found.

The USDA shifted to a more generous payout method in the second round. Instead of benchmarking losses against the previous year's sales, the agency used the best one-year sales for each commodity over the previous decade. That raised the payment for corn. But it also skewed payments even more toward cotton, quadrupling payouts for the commodity because cotton exports to China in 2011 were much larger than in 2017.

In the second round, the USDA paid farmers in each county a per-acre rate based on the mix of crops previously grown in the county.

The study examined five major commodities that account for the vast majority of crops produced in the U.S. It was published in Applied Economic Perspectives & Policy, the journal of the Agricultural & Applied Economics Association.