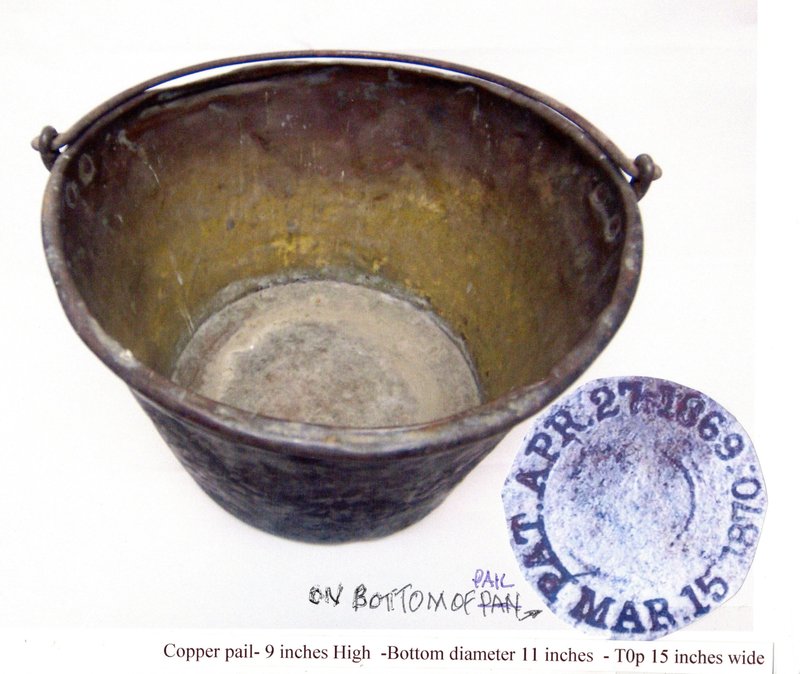 Is this pail or bucket really 131 years old? (Handout/TNS)

DEAR G.M.: Whether you call it a pail or a bucket, it is still just a useful household (or farmstead) object with antecedents that have been around for hundreds of years. So what about this everyday container needed to be patented in the last half of the 19th century?

In the Patent Act of 1793, Thomas Jefferson defined what could be patented as, "... any new useful art, machine, manufacturer or composition of matter and any new and useful improvement on any art, machine, manufacture or composition of matter." Under the sweeping description, the patents listed for this bucket could have been for any number of things, ranging from the bail handle to the way the rim was formed.

Many patent dates include the patent number, which can be looked up, but this one does not, and, therefore we are left somewhat in the dark. We can only know two patents were issued for the piece, one in 1869 and the other in 1870. This does not mean the particular pail was manufactured in either 1869 or 1870, but it probably does mean it was made within about seven years of the latest date mentioned.

Patents in one form or another have been around for a long time. The first patent law that resembles those of the modern world were established in Venice in 1475 and required that the object to be patented had to be described and explained and had to be novel with demonstrable proof of usefulness.

In the United States, patents did not begin to become systemized rigorously until 1836, when Patent No. 1 was issued. U.S. patents had been issued before this, but they were listed by names and dates, not numbers. In 1836 an official Patent Office was established, but it was still part of the Department of State. U.S. patents issued before 1836 were distinguished by a number with the suffix "X."

In 1846 a new caveat was added to the patent process — specifically that the invention should not be obvious to other professionals in the field. What about the pail in today's question was not obvious to other makers of copper pails? We have no idea and no patent number to look up and help us solve the conundrum.

Copper pails/buckets are of interest to collectors, but they are not particularly rare, which keeps the value down somewhat. However, the patent dates on this example are a bit unusual and should increase interest and monetary value.

We think for insurance purposes, G.M. should value the piece in the $125 to $150 range. Oh, and we think G.M. should resist the urge to polish it. Leaving the patina undisturbed is best.