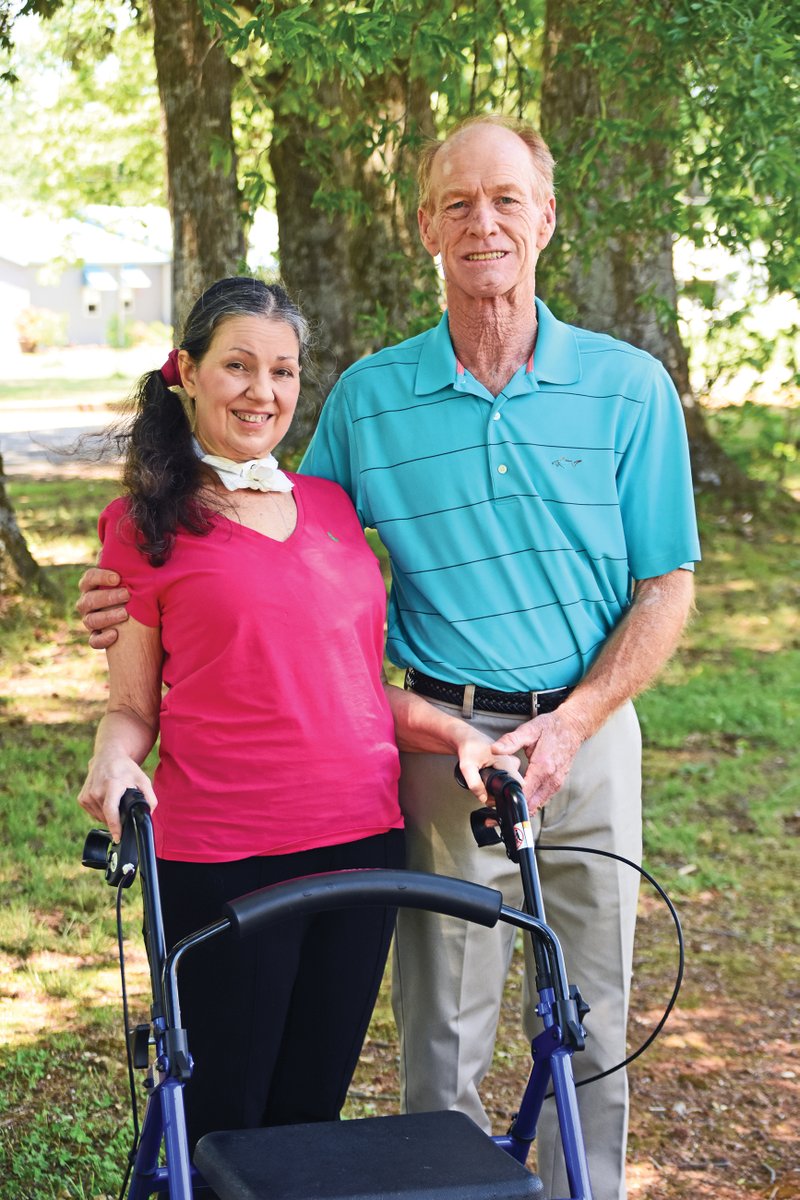 Christy Cavin, left, is assisted by her husband, Marty Cavin, on their property in Austin. Christy was diagnosed with progressive bulbar palsy, a form of ALS (amyotrophic lateral sclerosis), in 2018. Christy is a former teacher for the Cabot School District. ( Staci Vandagriff)

The month of May is ALS Awareness Month. A few years ago, an ice-bucket challenge brought awareness to the disease, but support is still needed.

“ALS (amyotrophic lateral sclerosis) is a fatal disease,” said Christy Cavin, a former teacher for the Cabot School District who was diagnosed with a progressive form of ALS in 2019. “We need to encourage more funding to be allocated for research.

“In 80 years since Lou Gehrig was diagnosed with the disease, there have not been any breakthroughs in treatment or a cure for this disease. People complain about being quarantined and locked in their houses. Imagine how people who have ALS feel, being prisoners in their own bodies.”

In 2018, Cavin started having some breathing problems. She said she went to her primary-care doctor, who ran a pulmonary-function test on Cavin, which she failed, and she was referred to a pulmonary doctor.

“She ran multiple tests and ruled out COPD (chronic obstructive pulmonary disease) and lung cancer,” Cavin said. “She treated me for asthma, initially, and eventually for chronic respiratory failure and restrictive lung disease.

“As my symptoms progressed, I began to have slurred speech,” Cavin said in an email interview. “My pulmonary doctor referred me to an ENT (ear, nose and throat doctor). He scoped me and found out my vocal folds were locking up.”

Cavin said she was then referred to a neurologist, who ran MRIs of her brain and neck, CT scans, EMGs3(electromyography), nerve-conduction tests and blood work — all of which came back normal. Cavin said her initial diagnosis was myasthenia gravis, and she was treated with medication and monthly intravenous immunoglobulin (IVIG) infusions.

“I eventually lost the ability to speak, and my breathing worsened,” Cavin said. “My neurologist ran all of the tests again, and they came back normal. He said I could possibly have progressive bulbar palsy, which is a form of ALS, but the tests did not confirm that to be the case.”

After several months of continuing treatments, her neurologist recommended that she visit the Mayo Clinic in Rochester, Minnesota, and she went there in August 2019 and was eventually diagnosed with progressive bulbar palsy.

“I now go to [the University of Arkansas for Medical Sciences], where I have the best team caring for me,” Cavin said. “I have an amazing neurologist, Dr. Neil Masangkay, his nurse, respiratory therapist, dietitian, [occupational therapist, physical therapist], speech therapist, social worker, and ALS [Association and Muscular Dystrophy Association] representatives.

“I also have a wonderful respiratory therapist who comes to my house.”

Cavin said the disease has been devastating, as far as taking away her independence. She has a feeding tube because she began having swallowing problems and choking, which led to a concern of her having aspiration pneumonia.

“I lost an extreme amount of weight before I got my feeding tube,” Cavin said. “My breathing continued to worsen to the point that I had to have an emergency surgery to get a tracheostomy.

“I was terrified to get a trach, but it has been life-changing.”

She said her house is full of medical equipment, including a trilogy vent for sleeping, an oxygen humidifier, a suction machine and a rollator walker, and she will soon receive an electric wheelchair as her mobility becomes more limited.

Cris Mammarelli with the ALS Association Arkansas Chapter said “[the association is] glad to help her with equipment and support.” He said the organization has planned a Walk to Defeat ALS on July 25 at War Memorial Stadium in Little Rock.

Cavin and her husband, Marty, have been married since 1983. She said her husband has been supportive, loving and her “knight in shining armor.”

“He so selflessly cares for my every need,” she said. “He has learned so much about everything that ALS has thrown at me and how to care for me.

“From the beginning, he stepped up and took over household chores: cooking, cleaning and shopping. He takes care of all my medication, feeding-tube needs, tracheostomy care and needs.”

“It’s like I tell everybody; I made a commitment to her, her mom and her daddy,” Marty Cavin said. “And I am standing by that commitment by taking care of her during this time.

“I don’t have any health care or caretaker experience, so it has been a trial-and-error experience. So I probably made some mistakes, but I want to ensure that my bride is taken care of and she is given everything she needs during this time in her life.”

Marty said it amazes him how Christy is still able to remain positive.

“She is a believer,” Marty said. “She’s put the whole matter in God’s hands. I think he is working for her.

“This is something you can never prepare yourself for. We would have never thought this would have happened. She had perfect vitals, and all her organs are good, and her health was as good as anybody’s. With this disease, you can see it start at the top and work its way down.”

Marty and Christy have one daughter, Morgan Purkiss. She is a physical therapist for the Pulaski County Special School District.

“I’ve been very impressed with [my dad],” Purkiss said. “He has learned a lot of new things. I have a background in physical therapy, so it has been making all of this easier.

“I don’t know how much easier it gets, but having a little bit of knowledge has helped.”

Purkiss said it has been tough watching her mom go through something so difficult.

“She embraces it,” Purkiss said. “She is extremely positive about it. We focus on the day-to-day. … But watching someone go through the worst diagnosis imaginable … we’ve become more OK as we go.

“We try to focus on the good things, but this time [during the pandemic] has been really challenging. I really just want to help because it is just the two of them being isolated with a terminal illness. It is a challenge and hard to watch.”

Christy said being quarantined for eight weeks has been tough because she hasn’t been able to see her granddaughters, daughter and son-in-law. She said this pandemic has been very scary for people with ALS, with their compromised immune systems.

Christy was a kindergarten teacher at Southside Elementary School for 25 years. She said she wanted to become a teacher after seeing her own daughter go through kindergarten.

“I realized the importance of her having a great kindergarten teacher,” Christy said. “I decided I wanted to go back to college and get my teaching degree to give children as positive a start as my daughter was blessed to receive.”

Christy said she was “blessed to have the best work family.”

“We also have a close bond with the families of our students,” Christy said. “I was blessed to teach all the siblings in families, their cousins and the children of my former students.”

She said she has developed relationships not only with her students, but their families — parents, grandparents, aunts, uncles and cousins.

“If children have a positive beginning to their education, it provides the foundation for the rest of their school years and the one for how they feel about school. My classroom was an environment where my students always felt loved and safe.”

Christy said she was nominated for the Teacher With Heart title several times by her students. She said she also received several Life Impact Diplomas from her students when they were seniors in high school. She said it was such an honor to receive the honors because of all their teachers during the students’ 13 years of school, she was picked for making a positive impact in their life.

“It was such a positive affirmation that I was recognized for the impact I made in the lives of my students,” Christy said.

Marty said the family has seen a huge outpouring of love, donations and prayers since the diagnosis.

“We have had an outpouring of community support during this time,” Christy said. “In addition to jugs of distilled water [dropped off], we have had people drop off groceries, meals, cleaning supplies, plants, flowers, goody baskets, books, daily devotional books, and the list goes on.

“The love, kindness, compassion and generosity we have been shown are so appreciated and have brought us so much happiness and joy.”

For more information on ALS, visit the website www.