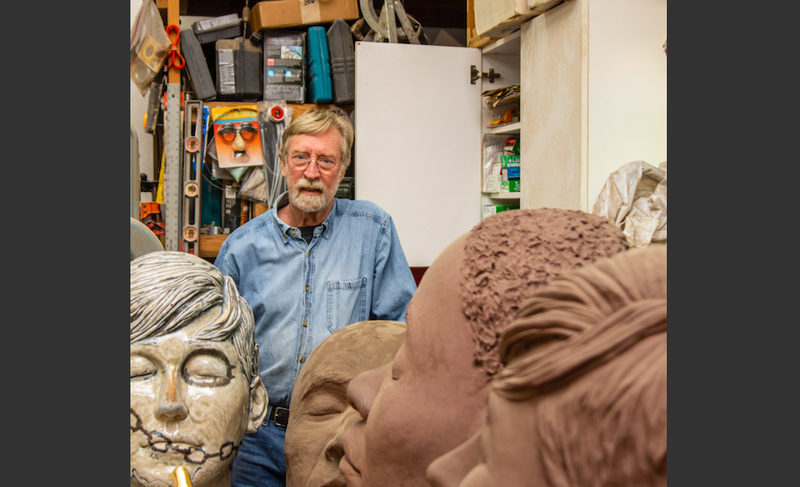 Little Rock sculptor Michael Warrick stands among a few of his works at his home studio. Warrick has been named the Arkansas Arts Council's Living Treasure for 2020. (Arkansas Democrat-Gazette/Cary Jenkins)

There are giant, disembodied heads in the garage of Michael Warrick. One of them is his own.

Not that Warrick, a Little Rock sculptor who last month was named the 2020 Arkansas Living Treasure by the Arkansas Arts Council, has a big head or anything.

But there is a large replica of his bearded visage — made of an oil-based clay on top of a Styrofoam skull — among the others in this space, which are part of a series he has been working on for a decade.

Along with these noggins, the garage-turned-studio is filled with sculptures, sculptures-to-be and materials to make them, like the bronzed molds Warrick created from sticks he picked up in his yard. There are boxes, file cabinets, shelves, tools, tables. A pot of hot wax sits on a stand and Warrick warns against sticking one's hand in it.

"It's such a boring environment," jokes the 69-year-old Warrick, who has taught sculpture at the University of Arkansas at Little Rock since 1990.

If you've spent much time around Central Arkansas, you've likely seen his work.

There's Mockingbird Tree, the elegantly swoopy, 18-foot-tall, stainless steel, bronze and gold leaf sculpture from 2016 on Chenal Parkway that was inspired by a drawing by his then-3-year-old daughter; Straight Lines on a Round World, Warrick's 2017 collaborative piece with his former student, artist Aaron P. Hussey, sits in front of the Little Rock Convention Center and Tree of Equality, Justice, and Peace, which is made of stainless steel, bronze and gold leaf, is at UALR's Ottenheimer Library.

Those are just a few of his public works in Little Rock.

Vision, a bronze portrait of a man in meditation assembled from a dozen 3D printed pieces with a core-ten steel base and 23 karat gold leaf, is at the south entrance of the Windgate Art & Design building at the University of Arkansas at Fort Smith. He has other sculptures in Maine, Colorado, California and Changchun, China.

In 2018, he created Youth, a seven-foot-tall figure of snaking branches and leaves sculpted from bronze, steel and gold leaf as a gift from the Little Rock Sister City Commission to Hanam, South Korea, Little Rock's sister city.

One common thread that runs through all of these sculptures is how little in common they appear to have.

Warrick is just as comfortable with huge, metal sculptures like Mockingbird Tree and Straight Lines on a Round World — which commemorates the Louisiana Purchase — as he is with bronze, stone, clay and other materials. His work also spans figurative sculpture, interpretations of everyday objects and pieces that are more abstract.

And he is as adept at using traditional methods of sculpture-making as he is with using newer processes like computer modeling and 3D printing.

"Michael is very versatile with his work," she writes in an email. "[He] uses a lot of different materials to make his work and has a really good sense of form, both abstract and representational."

She nominated him for the Living Treasure honor, she says, "because his work is superb and he has taught many students to become successful artists during his time at UALR.

"I have met several of his students and one of them, Sandra Sell, has become an outstanding wood sculptor who helps me with my larger work on occasion. For Michael to have that kind of impact on that many students is truly significant."

John Kinkade is the executive director of the Loveland, Colo.-based National Sculptors' Guild, which helps sculptors place their public works. Warrick is a fellow in the guild.

"One of the things that sets Michael apart is that he explores a lot of different mediums," Kinkade says. "He works in wood, bronze and stone as well as stainless steel. He accepts interesting challenges and is not afraid to go outside the box in his design work. His pieces are well-thought-out and well-engineered."

Warrick grew up in Morris, Ill., a small town about 70 miles southwest of Chicago, with an older brother and younger sister. His father, Robert, was a telephone repairman who did custodial work on the side; his mother, Ninalee, worked part time as a waitress.

"I was always drawing," he remembers.

He earned a little money helping his father on custodial jobs and would buy how-to books on drawing.

By fourth grade, Warrick was spending more time drawing than paying attention in his classes.

"My dad contacted the high school art teacher and asked him if he would give me some art lessons," Warrick says.

It was the beginning of a lifelong friendship with Joe Corsello, a Korean War veteran who taught art at Morris Community High School and who passed away about a year and a half ago.

"I would ride my bike over to the high school one night a week for a couple of hours," Warrick says. "I would sit in the classroom the high school students sat in and he would give me projects — printmaking, drawing, painting. I was doing things his high school students were doing. He loved teaching, and he was my first real mentor. We couldn't always afford art lessons, but that didn't matter. Joe taught me anyway."

After he moved away, Warrick always got together with Corsello when he returned to Morris.

"Every year, when I got the chance, I would go visit my parents and I would visit him, and when I became a teacher, we had even more to talk about."

By high school, Warrick was a star art student, but he was also interested in shop classes.

"We had welding, basic electricity and wood shop," he says. "That was when I did my first welding and metal stuff. I was also taking mechanical drawing and architectural drawing. I was learning a lot of different materials and processes."

He made his first sculpture at a two-week-long art camp when he was 16.

"A lot of the foundation for where I'm at now came from high school, and even grade school, working with Joe."

He studied ceramics at Illinois State University, and that's where his interest in sculpture started to take over. His background in welding and building things led him to building kilns and furnaces for firing clay and doing bronze work.

After earning his undergraduate degree in ceramics, Warrick received a master's degree in fine arts from Southern Illinois University.

He spent seven years working as an artist and taking part-time work teaching students from kindergarten through high school.

A pair of consecutive artist-in-residence assignments kept him in the Champaign-Urbana, Ill., area for a while and, crucially, only about an hour's drive from his then-girlfriend, Judy Lohmar. They have been married for 30 years and have two children, 24-year-old Annika and Phillip, 23.

In 1987, Warrick took his first full-time teaching position as an Assistant Professor of Sculpture and Ceramics at South Dakota State University in Brookings, S.D. From there he came to UALR, which reminded him of the Southern Illinois campus.

"It had traditional and nontraditional students," he says. "The art department had both a strong graphic design area and fine arts. UALR is very similar. That's the reason I like the school, the emphasis on both design and fine art. When you have that mixture, there is a healthy pollination that happens between students."

"I got so many good things from Michael. He would take my pieces and stand them and move them in ways that I never thought of. I didn't think about that kind of freedom, of playing with the work. That was one of the things I would do with my students, taking something that has an obvious orientation and moving it, actually playing with it."

Creating makes him happy, Warrick says, but he is just as passionate about teaching.

"I tell my students that I have two jobs: One is expressing my voice [in my art]. My other job — which is just as important, maybe more important — is helping you find your voice."

Warrick's influences range from Claes Oldenburg, who made massive sculptures of common items like clothespins and baseball bats, to the haunting, figurative works of George Segal.

Both approaches are still evident in Warrick's work, which not only includes public sculptures, but smaller pieces sought after by collectors.

"If you look at what I do, that is still there. It's a combination of both figurative work and monumental, everyday objects ... over time, my work has evolved and changed quite a bit, from large-scale installations to furniture-based sculptures to more organic, small-scale cast sculpture."

Many pieces also tell a story, like the plumb line, compass and surveyor's monopod on Straight Lines on a Round World, the large, stainless steel, tempered glass, cast bronze and concrete piece at the convention center; or Commemorative Garden, the 2001 work — also made with Hussey — from precast concrete, brick, stainless steel, Lexan plastic, trees and shrubs that honors the Little Rock Nine at the Little Rock Central High School National Historic Site.

"The story behind a work, to me, is always interesting," he says. "I always wanted to know why someone created something, what it meant to them. And then, how do people interpret that? That's always been an interesting and exciting element of the creative process."

"I like his figurative bronze work," says owner Kyle Boswell. "What I've really grown to like is how he's working with 3D printing and then casting in bronze. His work is very calming, very stylized and gentle. They are very well thought-out and executed. His work really reflects his personality."

Warrick also has a dedicated following of collectors, Boswell says.

"His openings are always very well-received. He has been an asset to my gallery, and I feel honored that he wants me to represent him."

The Arkansas Arts Council's Living Treasure award was started in 2002 at the suggestion of Jerry Fisk, the Arkansas bladesmith who in 1999 was named a National Living Treasure by the University of North Carolina at Wilmington's Museum of World Cultures.

The annual honor "recognizes an Arkansas artist who excels in the creation of a traditional craft and who actively preserves and advances his or her craft through community outreach and educating others," according to the council's website.

In a normal year, the arts council would hold a reception in May for the new Living Treasure recipient. But social distancing measures in place to help prevent the spread of the novel coronavirus have forced the group to postpone the event until, hopefully, this fall, says spokeswoman Scarlet Sims.

Warrick found out about receiving the honor in a call from his friend Horn.

"I didn't know what to say," he says of his reaction. "I was very humbled."

With classes shuttered at UALR due to the pandemic, Warrick has been teaching courses online.

Of course, he has a steady stream of sculptures and projects in the works. He has been creating, building and growing as an artist for his entire life, and this is no time to slow down.

"To be good at anything, you have to be tenacious," he says. "You have to learn from failure and evolve. To get a commission here in Little Rock, you might be competing against 45 other sculptors from around the nation. It's tough competition, and to rise up to that is a pretty good challenge."