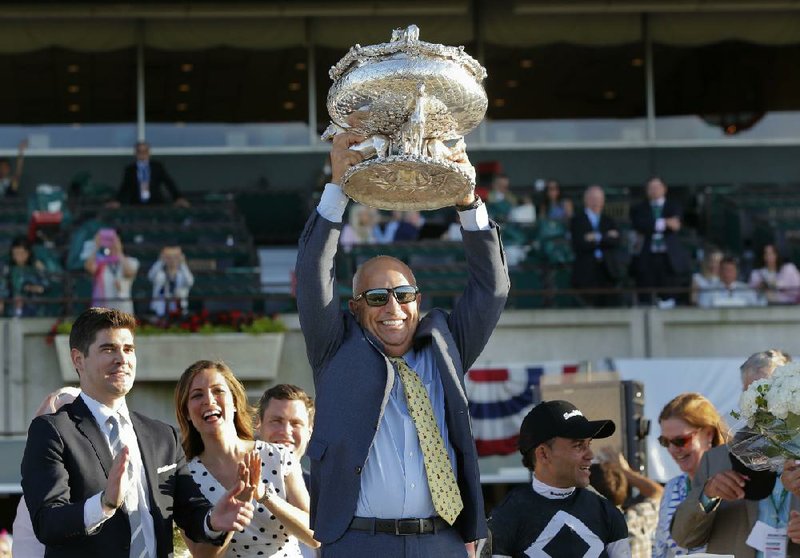 Mark Casse, here holding up the winner’s trophy after Sir Winston won the Belmont Stakes last June, said the traditions of the sport are “the least of our concerns right now” as coronavirus pandemic complicates this year’s races. (AP/Eduardo Munoz Alvarez)

BALTIMORE -- From the first year the Preakness Stakes was run in 1873 until the race settled into its current place on the calendar in 1932, it preceded the Kentucky Derby 11 times and was contested on the same day twice.

In 1945, as thoroughbred racing emerged from a blackout because of World War II, the Derby, the Preakness and the Belmont Stakes were all held over a two-week period in June.

In other words, the sacred history of dates and timelines associated with the Triple Crown series was never quite so sacred. That backstory of scrambled calendars and postponed running dates will be of particular interest this year as the racing world looks ahead to the most unusual Triple Crown schedule in recent memory.

The coronavirus pandemic has already pushed the Derby from May 2 to Sept. 5. The Maryland Jockey Club and NBC Sports are considering dates in July, August and October for the Preakness. And the New York Racing Association has yet to announce postponement plans for the Belmont, currently scheduled for June 6. So the possibility looms for an out-of-order Triple Crown with unfamiliar intervals between the races.

What to make of this for a sport that cherishes its traditions?

"Honestly, I think that's the least of our concerns right now," said trainer Mark Casse, who won the 2019 Preakness with War of Will. "If we could just get back to racing, that would be wonderful. And with what's going on in the world, even that's not that important. ... I'll be happy, in all honesty, if we have a Kentucky Derby, a Preakness and a Belmont this year. I think that would be a bonus."

Casse loves the Triple Crown races -- the spectacle, the fan interactions, the tense competition -- as much as any horseman, and he said they'll undoubtedly feel different if run on unfamiliar dates and/or without spectators.

His tone was shared by others steeped in Triple Crown history.

"We have no idea how well the tracks will be able to coordinate this, but I think assuming the tracks are open for racing, even without fans, it'll be fine," said Bennett Liebman, a lawyer in residence at Albany Law School and longtime student of racing history and regulations. "I think we'll get over it."

Liebman has long been fascinated by oddities in Triple Crown history -- the five years when the Belmont Stakes was run at Aqueduct Racetrack after the stands at Belmont Park were condemned in 1962, the version of the Preakness that was run in Brooklyn from 1894 until 1908 -- so to his mind, 2020 will simply go down as another unusual chapter.

"It's not like the Triple Crown has always been written in concrete," he said.

Trainers are less worried about the historical than the practical implications of a delayed and potentially scrambled Triple Crown schedule.

They're used to preparing 3-year-old thoroughbreds for the first Saturday in May and, in special cases, the five weeks beyond that. But horses ready to peak in the spring are not necessarily the same ones who dominate in the summer and fall.

Trainers aren't sure what to do with their best 3-year-olds in three weeks, much less three months.

Two-time Kentucky Derby winner Todd Pletcher is as good as any trainer at getting multiple horses ready for the first leg of the Triple Crown. But he's acknowledged that the pandemic has thrown off any normal rhythm in his preparations for potential 2020 contenders Farmington Road and Gouverneur Morris, saying "I don't think you could emphasize enough how big of a change it makes."

"You're trying to get a horse prepared for its upcoming race whether that's this week or in a couple of weeks, and if you're able to get those races in, then you get that much closer to making a decision on what you may or may not do in September," Pletcher said on a recent conference call. "But you know, in life and in horse racing, four months is an awfully long time."

Casse maintains a large spreadsheet of future races for each of the horses he trains. He joked that it's a good thing he has a delete button at the moment.

"We don't know when racetracks are going to start, and when they do start, how they're going to re-arrange the schedule," he said.

The postponements might actually favor his best 3-year-old, Enforceable, who ran a disappointing fifth in the March 21 Louisiana Derby. Without the pressure of a looming Kentucky Derby, Casse was able to take Enforceable back to his training center in Ocala, Fla., for some refreshing work.

But with War of Will in 2019 or Classic Empire in 2017, similar interruptions would have been terrible news.

"Very seldom do things go as planned," he said. "I was asked a few years back, 'Do you ever dream about something happening?' And I said, 'No, because if I dream about it and it doesn't happen, I can only wake up disappointed.' "

Maryland-based trainer Graham Motion, who won the 2011 Kentucky Derby with Animal Kingdom, said any horse that won all three races would be honored as a Triple Crown winner and all-time great.

"But whatever happens this year, there's going to be an asterisk above it," he said. "It's not going to be the same; it doesn't appear like there's any way it can be conducted in the usual manner with the Derby, Preakness and Belmont. There won't be the time to do that."