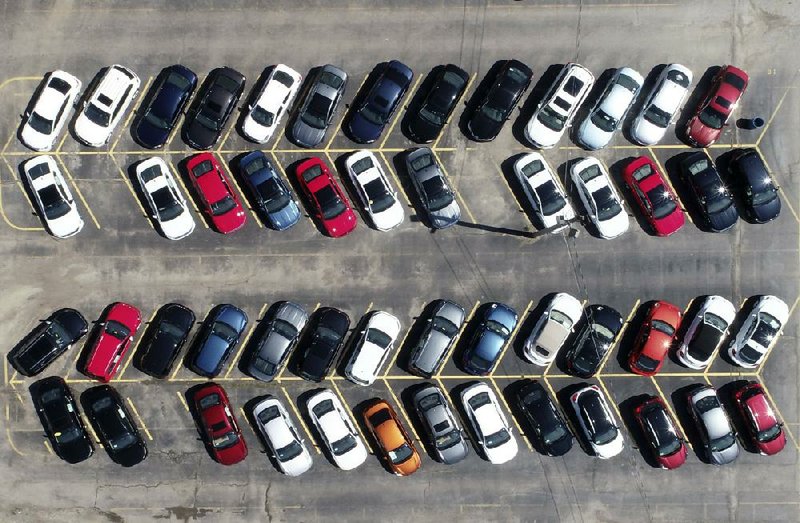 Cars are parked at a dealership in Green Park, Mo., in April. U.S. retail sales posted a record drop in March, with auto sales down 25.6%, as the coronavirus outbreak closed down thousands of stores and shoppers stayed home. (AP/Jeff Roberson)

A precipitous decline in car sales amid the deadly coronavirus outbreak has caught the attention of Capitol Hill, where some lawmakers are now urging Congress to authorize new aid for the auto industry.

With consumers spending less, and factories nationwide shuttered or severely hamstrung, Democrats and Republicans largely representing the hard-hit, auto-heavy Midwest are leading an early push to persuade their colleagues to help manufacturers and suppliers as part of a future pandemic relief package. Absent that assistance, they warn that massive losses could leave workers unemployed and stall any economic recovery.

To make their case, lawmakers including Reps. Marcy Kaptur, D-Ohio, Debbie Dingell, D-Mich., and Fred Upton, R-Mich., began circulating a draft letter last week emphasizing that the "projected economic fallout for the industry is grave," according to a copy obtained by The Washington Post.

In some cases, they said, the challenges facing the automotive ecosystem "exceed those of the 2008 financial meltdown" -- the recession that ultimately yielded an approximately $80 billion auto industry bailout.

The heightened push on Capitol Hill comes as the industry grapples with steep losses: Car sales were down about 40 percent, according to J.D. Power, which monitors the industry. Since the outbreak began in March, retailers have sold nearly 800,000 vehicles fewer than initially forecast, the firm said.

The shortfalls also have touched off an early lobbying scramble on the part of the motor vehicle industry, which spans manufacturers and dealerships, parts suppliers and rental-car companies. One idea that has been discussed among lawmakers and industry is the creation of a new federal program that might persuade penny-pinching Americans to purchase new vehicles, according to two congressional aides who spoke on the condition of anonymity to describe private conversations.

"It is conceivable, given where we are today, and depending on the extent to which the industry remains at these very low levels, that we might need to see some priming of the pump," said John Bozzella, president of the Alliance for Automotive Innovation, which represents Ford, General Motors, Fiat-Chrysler and others.

Bozzella said the organization is "looking at whether demand stimulus is necessary given the prolonged shock to automotive demand," though he said exactly what it would entail "is still an open question."

For the auto industry, which employs more than 10 million workers in a wide array of fields, the economic challenges wrought by the coronavirus have proved immediate and immense. Purchases have picked up in recent days following a huge drop in March, particularly because of consumer-friendly financing options on the part of desperate sellers. But Tyson Jominy, vice president of data and analytics at J.D. Power, wagered that the sharp decline remains "as bad or worse" in the short term as the troubles the industry faced during the 2008 recession.

Driving the downturn is a growing reticence among consumers to make large purchases at a moment when their jobs and incomes are far from guaranteed. More than 30 million Americans filed unemployment claims in the past six weeks, marking the worst economic downturn since the Great Depression -- and one that may worsen if the coronavirus outbreak continues unabated.

Adding to the industry's burdens are stay-at-home orders, which have forced many car manufacturers, suppliers and dealerships to close for months. Some states have recently reopened for business, hoping to get workers back on the job while reviving local shopping and commerce. But many critical manufacturing hubs, including the auto epicenter of Michigan, remain closed out of concern that factory floors could facilitate the spread of the disease known as covid-19.

In response, lawmakers representing major auto manufacturing hubs have started sounding off in recent days, seeking to ensure the industry's woes don't further exacerbate local economic hardships. Michigan, for example, already is facing a budget crisis and a sky-high unemployment rate that has left about a quarter of the state's eligible workers seeking jobless benefits. Some of the state's representatives in Congress now say that carmakers and others deserve the same attention afforded to the airline industry and others hit hard by the coronavirus.

"Members of Congress are going to be focused on the drivers of their regional economy," said Rep. Haley Stevens, D-Mich. She said an early focus is on ways to "address the drop in sales, and what that means for future legislative action."

More than a decade ago, Stevens had a front-row seat to the last collapse facing the auto industry. She served as a top official to a task force assembled by President Barack Obama to review the bailout of Chrysler and General Motors. It was during that period that the U.S. government ultimately authorized a federal program to stimulate car purchases, known as "Cash for Clunkers," which proved popular but sparked Republican criticism.

With the coronavirus once again cutting deep into automakers' bottom lines, Stevens cautioned: "I don't think this is 2008," pointing to the fact that structural factors leading to bankruptcy aren't to blame for the industry's misfortune. But she said the bleak financial situation "still warrants a discussion on how to potentially stimulate sales."

"I don't think anybody wants a handout," said Dingell, who served in a top role at GM before arriving in Congress. "If we're going to get business up and running again, there's got to be demand for goods."

Automakers, much like other industries, are able to take advantage of billions of dollars authorized under the $2 trillion Cares Act adopted by Congress in late March. But lawmakers in their draft letter signaled support for additional relief specifically set aside for the industry.

"Given the enormity of the industry's economic footprint throughout our nation and its significant legacy, we seek your assurance that an appropriate response will be included so that American workers in the automotive industry can help drive a robust recovery," wrote lawmakers including Stevens, Kaptur, Dingell, Upton, Daniel Kildee, D-Mich., and Terri Sewell, D-Ala.

Many on Capitol Hill -- along with those who work for automakers and the network that supplies them -- are careful to stress they aren't seeking a bailout, as they seek to avoid the same political blowback they faced during the last economic crisis. But some in the industry have not been shy at times from seeking policy changes that might ease some of the economic havoc facing their businesses.

The Alliance for Automotive Innovation last week joined dozens of other groups across industries in calling for congressional legislation that may shield them from lawsuits in the event they restart operations and workers get sick from the coronavirus. Republican leaders have endorsed such liability protections despite Democratic opposition.

A trade group for tire manufacturers, meanwhile, asked Congress in late April to help it tackle a raft of "unprecedented challenges," including by enacting a payroll tax holiday. Lobbyists for truck dealerships similarly sought to lessen their tax burden amid declining demand. Suppliers asked the Trump administration for tariff relief recently.

And many groups throughout the ecosystem have lobbied for months to persuade the U.S. government to categorize a wide array of their workers as essential. They've also ramped up their efforts in Michigan, where the Motor and Equipment Manufacturers Association on April 30 asked Democratic Gov. Gretchen Whitmer for the ability to open five days before manufacturers so they have a start on supplying critical parts. The group did not respond to a request for comment.

"The industry was doing real well. We had come out of the slump in 2008," said Kaptur, whose Ohio district includes and is close to a number of auto manufacturing facilities. "If we could help the airline industry, what about the motor vehicle industry?"