Three weeks ago today, the Arkansas Democrat-Gazette's Sean Clancy used his Paper Trails column to write about the Easter storm that pretty much finished off the structure that once housed Centennial Baptist Church at Helena.

Mayor Kevin Smith, who lived down the street from me on Capitol Hill in Washington, D.C., in the 1980s when we were young and more idealistic than pragmatic about the future of the Arkansas Delta, said the church looked "like a bombed-out World War II ruin."

"The building, which has stood at the corner of York and Columbia streets since 1905, is an important part of Arkansas history," Clancy wrote. "It was the home church of Rev. Elias Camp Morris, founder of the National Baptist Convention. Morris was pastor of an earlier church on the site in 1879 and served at Centennial until his death in 1922."

The National Baptist Convention went on to become the largest historically black denomination in the country. Centennial had almost 1,000 members when Morris died.

Here's the thing about the building that had been home to one of the most important churches in the South, designated as a National Historic Landmark in 2003: It was already nothing more than a shell before the storm.

It wasn't the Easter 2020 storm that killed Centennial Baptist Church; it was the inability of blacks and whites to trust each other, a problem that has plagued the Delta for decades and continues to handcuff the region.

I've spent a lot of time in Helena during the past 30 years since moving back to Arkansas from Washington. Of the many sad things I've seen in that port city, the saddest is the number of issues that break along black-white lines, hindering economic growth and social progress.

By the time National Public Radio did a story on Centennial in January 2014, the building was falling in. The story noted: "Bricks are breaking apart and falling away, and a huge metal structure abuts the back wall. Heritage tourism is a growing industry across the South, as civil rights pilgrimages take note of historic sites like the restored Lorraine Motel in Memphis, where Rev. Martin Luther King Jr. was killed. But in smaller towns like Helena, finding the resources to save lesser-known landmarks is a challenge.

"Inside Centennial Baptist, pigeons roost along the hardwood floors and pews where parishioners once worshiped. Beer and whiskey bottles litter a corner and scaffolding holds up the high-pitched roof. . . . Centennial became a source of pride for the African American community in segregated Helena, once a bustling port on the Mississippi River."

The E.C. Morris Foundation, to which the congregation had donated the building, received state funding in the 1990s to protect the structure. Little Rock architect Tommy Jameson drew up a restoration plan and told NPR: "It was somewhat frightening ... from a structural standpoint. But it was magnificent. The architecture is incredible. The soaring spaces. It's 40 feet up to the ceiling. It's a wonderful space."

Jameson estimated it would take more than $2 million to restore the church. In 2006, preservationists were able to secure a $300,000 Save America's Treasures grant. The federal grant never came through, however, due in part to the actions of a black activist named Phyllis Hammonds, long a controversial figure in the Delta.

When asked about the white preservationists trying to save the church, Hammonds told NPR: "I view it as a plantation mentality: 'You give me the information and we'll tell your story.' I would rather see it fall and say, put up a sign, 'Here Centennial stood.' At least we would still be in control."

Unfortunately, Hammonds got her wish. Helena World recently reported on other organizations in which Hammonds is involved, along with the efforts of those organizations to take control of structures in the city. A World editorial on April 22 said: "Centennial's hull now stands as a monument to the effects of poor leadership and should serve as a warning to the Helena-West Helena School Board as it considers which bids or proposals to accept for all or part of the Miller campus. . . .

"Drive by the old West Side Community Hub. Hammonds is listed as director of that organization. It looks very much like Centennial did before it fell. Unkept grounds, broken windows and evidence of decay and likely vandalism highlight one's view when driving by this once-proud beacon of hope. Instead of a beacon of hope, West Side stands today as a quintessential example of blight."

During the 13 years I spent in the governor's office and with the Delta Regional Authority, I was consistently frustrated by the fact that the loudest voices--black and white--controlled the debates in the Delta. The majority in the middle remained silent. And if they had the financial ability to leave the Delta and those headaches, they often did so.

The best hope for the region going forward, perhaps the only hope, is for those in the middle to speak up and drown out the voices of hate and the purveyors of racial discord.

It's easy for those from outside the region to place the Delta's racial problems in neat little boxes. There are well-meaning people who will tell you that all of the problems are due to years of white domination and racism. On the other end of the spectrum are those who point to rampant corruption on school boards and in city governments where blacks have earned a majority. It's not that simple.

British travel writer Richard Grant wrote in Dispatches from Pluto, his book about living in the Mississippi Delta: "The federal government prevailed against the segregationists, as it had prevailed against the secessionists a century earlier. Once blacks were able to vote in the Delta, they started to win public office because they outnumbered whites 3-to-1, and these days most teachers, principals, school administrators, judges, police officers, mayors, and city and county employees in the Delta were African American. Whites still had the wealth, but blacks held the political power.

"Many of the older whites in Greenwood, Miss., pointed to the town's decay, its high crime rate and its corrupt, nepotistic, failing public school system as evidence of what happens when blacks are in charge and proof that things worked better under Jim Crow. Furthermore, they often claimed to be the victims of racism now since they were in the minority, and blacks were always demonizing them."

When I worked for the DRA, the organization was headquartered in Clarksdale, Miss., where I spent about two nights a week. I got to know Bill Luckett, the white businessman who defeated a candidate from a prominent black family to become mayor in 2013 before being defeated by a black candidate when he ran for re-election in 2017.

During our visits at Ground Zero, the restaurant and blues club that Luckett owns along with actor Morgan Freeman, Luckett would talk about his experiences battling the race issue. Here's what he told Grant: "You've got 5 to 10 percent on either side who hate. Most folks get along now, treat each other with politeness, courtesy and respect, and that's really all you can ask for."

If there's hope for the Delta, it's that the 80 percent in the middle will work together going forward. They're going to have to drown out and run over the obstructionists who play the race card at every turn. Those obstructionists are black and white, Democrat and Republican. If that doesn't happen, far more than Centennial Baptist Church will fall.

Rex Nelson is a senior editor at the Arkansas Democrat-Gazette. 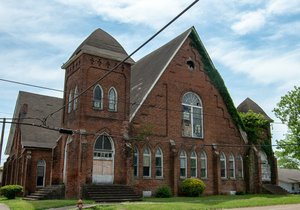 Centennial Baptist Church, shown in this 2018 photo, was placed on the list of Most Endangered Places by Preserve Arkansas. (Arkansas Democrat-Gazette/Cary Jenkins) 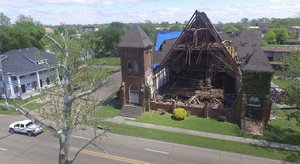