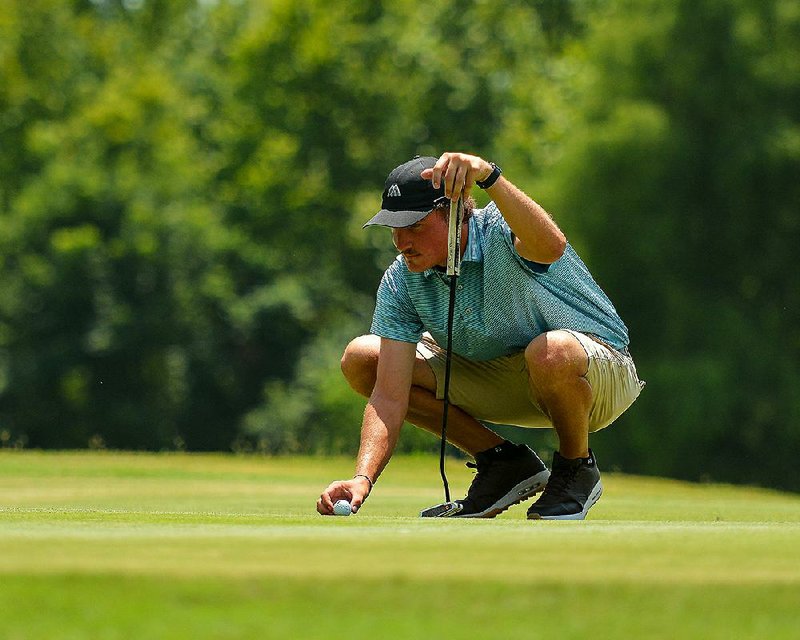 FILE — Spencer Labarbera lines up a putt during the final round at the Maumelle Classic at Maumelle Country Club in this July 21, 2019 file photo.

A proposal to turn property located behind the Maumelle Country Club clubhouse into a residential area has met resistance from country club members who say the road into the area will adversely affect the golf course.

Maumelle City Council members met Monday and heard the first reading of a request from Central Arkansas Water to allow property near the golf course to have residential zoning and land use. The issue will be brought up for a second reading at the next City Council meeting.

Mark Bingman, a representative for the real estate firm RPM Group, told council members the old water treatment plant was an "eyesore" and that residential housing seemed like the best use of the property.

Scott Grummer, chief of staff for the city and interim Planning and Zoning director, said the applicant plans to put multifamily units, such as townhomes or apartments, on the property.

Bingman said proceeds from the sale of property would go to paying off the bond and would benefit all residents.

Norris said in an email Tuesday the most important thing to note is there isn't a residential subdivision under review at this time. He said the review is simply of the city's Land Use Plan and Zoning Map.

"The applicant seeks to change the land use from open space to special use residential and the zoning category from Open Space to Planned Residential District," he said. "Any reviews of a specific development would occur later as we review things such as the preliminary plat, preliminary development plan, and other project specific documents."

The Maumelle Planning Commission on April 23 approved 5-2 a motion to recommend adoption of the amendment to change zoning and land use to fit a residential request.

The process has caught the attention of Maumelle Country Club members, who have sent 150 emails opposing the idea of a residential use for the property, Grummer said.

Gib Carpenter, a Maumelle Country Club representative, said Thursday the organization hasn't been presented an acceptable plan for accessing the property for the applied purpose. He said developers are currently wanting to use an access easement that runs through country club property.

"When it was a water treatment plant the traffic through the area was minimal," he said. "If this is approved, then the traffic between the pro shop and the number nine hole will increase exponentially, causing major problems for the club."

Carpenter said the area where the access easement cuts through is where the club stages tournaments, has substantial cart traffic and is near a practice green and the pro shop.

He said a situation similar to this had occurred previously with a developer and the club's position was the same then -- the access easement had been severed and abandoned.

Bingman said during the Planning Commission meeting that Central Arkansas Water stated the easement was not abandoned and that it belonged to the property owner. He said they were sensitive to cart safety on the path and there were proposed cart crossings on the new design, as well as additional parking by the cart barn.

Bingman said they didn't want to move forward with the additional information for the easement if it wasn't approved for rezoning.

Carpenter said their opinion was that it wasn't their responsibility to look at how to access the property, and that it was up to the developer to resolve access issues without adversely impacting their business. He said the position of the club is the area shouldn't be rezoned if there isn't an alternative to the easement.

"The road will be a safety hazard and an inconvenience to our members," Carpenter said.

David Johnson, a representative for Central Arkansas Water, said in an email Thursday that the company is confident the existing easement assures access to the property.

"There currently exists a fifty-foot easement from Club Manor Drive to the entrance to the property," he said. "The buyer of the property will build a road to the standards required by Maumelle ordinances."

Carpenter said the club is ready to take legal action if needed when it comes to the easement.

"We aren't anxious for a fight, and we would be willing to meet with them," he said.

Johnson said he knows there has been several legal questions about the easement, but he said state law permits an improvement of the roadway from a private road to a city street.

City council member Marion Scott said during the meeting she was concerned if there was an impasse between the country club and Central Arkansas Water.

"The opportunity to increase revenue is important, but I hear the concern about it being detrimental to the country club."

Carpenter said he doesn't know if the situation can be resolved until someone presents a plan for the property that won't interfere with the country club's business.

"We are open to suggestions, but so far it has been them saying we have an easement and, by golly, we are going to use it," he said.

Johnson said many golf courses have crossings for golfers across residential streets without trouble.

"The issue is no different for Maumelle Country Club."