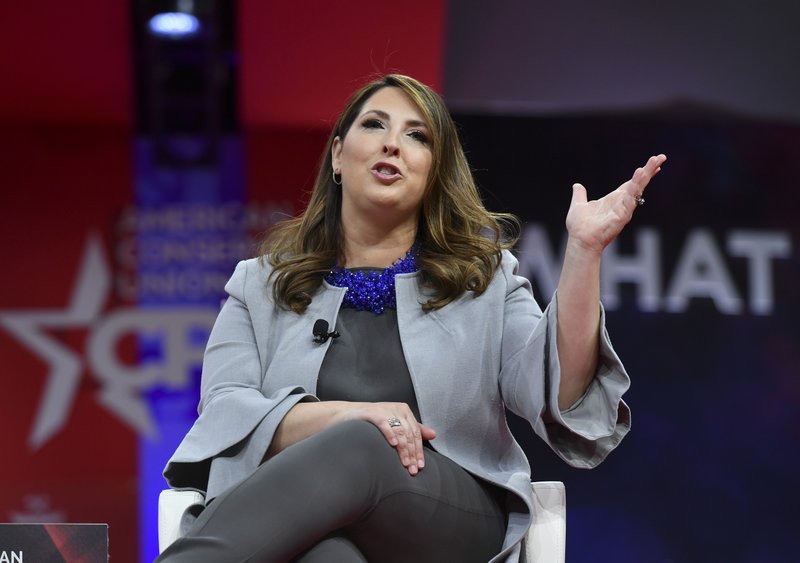 Ronna McDaniel, chair of the Republican National Committee, is pushing forward with plans for a political convention this summer. MUST CREDIT: Washington Post photo by Ricky Carioti

The Republican National Committee has asked the federal government to provide personal protective gear for the political conventions this summer, underscoring the challenges of staging the quadrennial events during a pandemic.

RNC Chairwoman Ronna McDaniel said the gear was needed for both parties' conventions because they are "national security" events, and that she had recently begun talking to Trump administration officials about such a request.

Whether even to hold the conventions has become an increasingly fraught issue amid a pandemic that has shown few signs of slowing and has cratered the U.S. economy.

Both parties said they hope to hold in-person events -- in Charlotte, N.C., for the Republicans and Milwaukee for the Democrats -- and are struggling with how to pull that off while following public health guidelines and keeping attendees safe.

Democratic Party Chairman Tom Perez said now was not the time to seek personal protective equipment from the federal government.

"The president's mismanagement of this global health crisis has made the work of front-line health care workers unnecessarily more challenging and now he plans to further disrupt the critical distribution of PPE by prioritizing a stockpile for a political event," Perez said in a statement. "

Still, Perez did not rule out taking the gear in the future.

A White House official said no decision has been made but that the conventions have been viewed in the past as national security events. A Republican official involved in convention planning said the RNC had also stowed away money to buy PPE if necessary.

The Republican Party has been more bullish about holding an in-person convention than Democrats, but officials in both parties are in active discussions about scaled-back events.

President Donald Trump is determined to have an in-person convention and was briefed by political advisers Thursday, said people familiar with the meeting, who, like others, spoke on condition of anonymity to discuss internal planning deliberations.

Still, three Trump advisers said the RNC and the campaign were looking at scaling back attendance in the 15,000-seat arena that will host the convention, limiting or eliminating such events as concerts and parties after the official events, or requiring guests to take particular health precautions before entering, such as having their temperatures tested or wearing a mask.

One person with direct knowledge of the planning said "it is difficult to imagine a scenario where everyone is sitting right next to another person in the arena."

McDaniel said the party planned to release hotel rooms to state delegations in coming days, and she had been in touch with a range of state party officials and committee members.

"Every state party chair I've talked to is really excited about having the convention in person," she said.

Since delaying their convention by more than a month in early April, Democratic leaders have been planning on dual tracks for a virtual or limited in-person convention, and have repeatedly said they are weeks away from making a decision. But the convention host committee in Milwaukee has faced economic challenges in recent weeks, forcing it to lay off about half its staff.

Though many Democrats see the in-person convention as unnecessary for a successful campaign, party leaders are concerned about the optics of Trump pulling off an in-person event while Democrats switch to a socially distant television broadcast. But some Democratic officials fear their delegates will be afraid to attend.

"If our convention is at risk, I would expect that would be the same problem for the Republicans as well," Rep. Gwen Moore, D-Wis., a co-chair of the host committee, said recently.

She described planning that was underway for more socially distant meetings and new hygiene measures to keep microphones clean during events. Like others in the party, she said she was eager to preserve some sort of in-person event. "We have had conventions during the Civil War and world wars."