READ TO ME: A picture book for kids curious about Mars 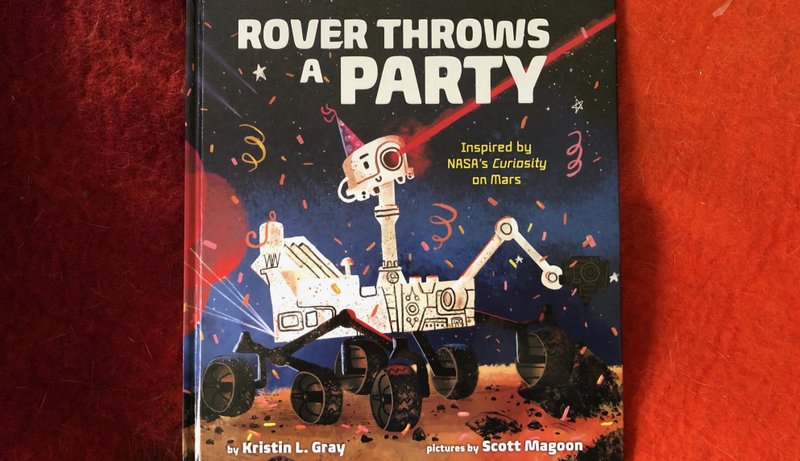 STORY: First thing to know: This is not a bedtime story, at least not the first time you share it with a child. It's brainy. It stimulates thought.

The current Mars rover, aka Curiosity — which is a machine, right? — has somehow become 1) very cute and 2) emotionally invested in being feted on the anniversary of Aug. 5, 2012, the day it powered up on the red planet. In other words, Curiosity wants a birthday party Aug. 5.

But readers don't learn that from anything so simple as being told so by a narrator; they gather it by deciphering clues. The first clue is a small calendar on the opening page labeled "B-Day Countdown" which indicates the story begins July 27. Otherwise, the first page communicates the vast dusty wastes of Mars while the narrator explains the (very cool) fact that the colors of the Martian sky are opposite those on Earth: Sunrises and sunsets are blue while daytime is red and orange.

The second page represents July 28. Scott Magoon's inventive, full-bleed illustrations depict a dreary Martian hillside plastered with pink posters reading: "You're invited." So, that's odd. And meanwhile, the narrator explains it will take years for the rover to reach the summit of Mount Sharp from the center of the Gale Crater — a fact relevant to what we see the rover doing but unrelated to all those pink posters.

As the pages turn, we gather more clues and can understand what's happening. This storytelling approach can nurture the skill of making deductions based upon accumulated observations.

At the end comes relief for nonspace-fan adults: a helpful essay with photos of the rover, a bibliography and facts about Curiosity's apparatus. The essay reports that the designers programmed Curiosity to hum "Happy Birthday'' on Aug. 5, 2013, and that it was the first time a song was played on a planet other than Earth.

If the child is not already keen for space, though, Rover represents work for the adult who shares it. A simpler birthday-related space book would be If You Held Your Birthday Party on the Moon by Joyce Lapin. But in that equally informative book, the birthday boy has guests to entertain. Rover Throws a Party is, in a coincidence, a pandemic-related birthday story — with a hopeful ending. And lasers.