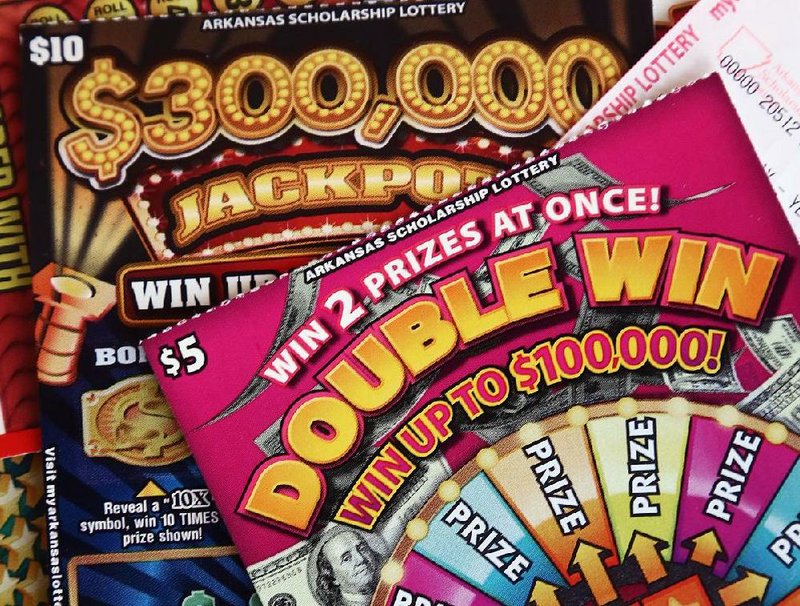 The drop in gas prices and the closure of the state's three casinos and other businesses amid the covid-19 pandemic helped fuel the Arkansas Scholarship Lottery's fortunes in April, as the lottery set a record for total revenue for that month and tied the month's record in the amount raised for college scholarships.

Revenue in April reached $49.5 million -- up from the $43.9 million collected in the same month a year ago, its previous record for April -- the agency reported to Gov. Asa Hutchinson and the Legislative Council's lottery oversight subcommittee co-chairmen, Sen. Joyce Elliott, D-Little Rock, and Rep. Chris Richey, D-Helena-West Helena.

The amount raised last month for college scholarships totaled $8.3 million, up from $8.1 million in April 2019, the agency reported. The record of $8.3 million for April was set in 2011.

The lottery has been selling tickets since Sept. 28, 2009, and helped finance more than 30,000 Arkansas Academic Challenge Scholarships during each of the past nine fiscal years, though the total value of the scholarships handed out peaked several years ago.

Lottery Director Bishop Woosley said Monday that scratch-off ticket revenue has been ahead of its record pace from fiscal 2019 all year long and that the trend continued into April. Fiscal 2019 ended June 30.

"In addition, we launched an oversized Break the Bank ticket in the middle of April which increased sales as well," he said in a written statement.

"Draw game sales have been decreasing all year long as a result of the lack of larger jackpots," Woosley said.

Because of the economic impact of the pandemic that reduced lottery sales across the country and led to declining interest rates, the national groups that run the larger games -- Powerball and Mega Millions -- reduced the minimum starting jackpot when the game starts over after a winner. They also cut the amount of the increases in the jackpot between drawings.

Asked about the role of lower gas prices on April's lottery revenue, Woosley said the prices "likely had a lot to do with the increase in [total] sales as we have not seen gas prices this low in a long time."

In addition, "you would have to think the closing of the casinos had a positive impact on our sales," he said when asked about the role of the closure of Southland Casino Racing in West Memphis, Oaklawn Racing Casino Resort in Hot Springs and Saracen Casino Annex in Pine Bluff in mid-March.

As for the impact of the covid-19 pandemic on the lottery's fortunes, Woosley said that "we saw an initial decrease in sales in the middle of March when the pandemic struck."

"However, the decline did not last more than two weeks and we have seen an increase in sales since that time. I would attribute most of this to the low gas prices, the casinos being closed, restaurants, movie theaters and other forms of entertainment being closed. Even in times like these, people need some entertainment and I think some of them have found that in running to the store and grabbing a few scratch off tickets so they can have a little fun at home," he said.

Woosley, who is president of the North American Association of State and Provincial Lotteries, said states that have not had shelter-in-place orders and have been hit less hard by the pandemic have seen stable or slightly increased lottery sales over the past month and a half. Arkansas is among these states.

But lottery sales fell in states that have had shelter-in-place orders or that were hit harder by the pandemic, he said.

In that period, Arkansas scratch-off ticket revenue totaled $354 million, up from $343.6 million in the same period in fiscal 2019, while draw-game revenue totaled $63.8 million -- down from $92.3 million, according to the lottery's records.

The lottery's revenue also includes fees paid by retailers. The lottery reported it had 1,974 retailers selling tickets on April 30.

In the past 10 months, the amount raised for college scholarships reached $65.8 million, a drop from $76.5 million in the same period a year ago.

At the end of each fiscal year, the lottery transfers the balance of the unclaimed prize reserve fund, minus $1 million, to college scholarships, under state law.

Asked why he is projecting totals for next fiscal year, Woosley said, "There is a great deal of uncertainty in the lottery world and the world in general right now.

"In addition, we were forced to change the multi-state games to account for the dramatic drop in sales. At this point, there is uncertainty how long those changes will remain in place. We created the budget using current trends in sales and did our best to provide a very conservative, yet realistic budget for next fiscal year. I would not be surprised if we fared better than what we have budgeted. The impact of the casinos was included, but the uncertainty and the economic conditions weighed the most in our process," Woosley said.

The state Division of Higher Education has forecast that it will distribute $94.6 million in Arkansas Academic Challenge Scholarships to 33,315 students in fiscal 2020.

So far in fiscal 2020, the division has provided $91 million in scholarships for about 27,500 students, said Alisha Lewis, a division spokeswoman.

"Some institutions have not submitted the final roster," she said.

The total Academic Challenge Scholarship distribution peaked at $132.9 million in fiscal 2013, going to 33,533 students. That's dropped since then, largely because of the Legislature cutting the amount of the initial scholarships three times in 11 years.

The 2017 Legislature created the Workforce Challenge Scholarship program to use excess lottery proceeds to provide up to $800 a year for students enrolled in programs that lead to them being qualified for high-demand occupations.

"Since this application is year round, there is a lag-time in paying rosters," she noted.

The 2019 Legislature created the lottery-financed Arkansas Concurrent Challenge Scholarship program under Act 456. High school juniors and seniors are eligible to receive the scholarship for a semester or academic year in which they are enrolled in an endorsed concurrent enrollment course or certificate program under certain conditions. In fiscal 2020, 2,548 students have been awarded those scholarships, for which $872,760 has been distributed, Lewis said.