Efforts of GFPB, city starting to pay off 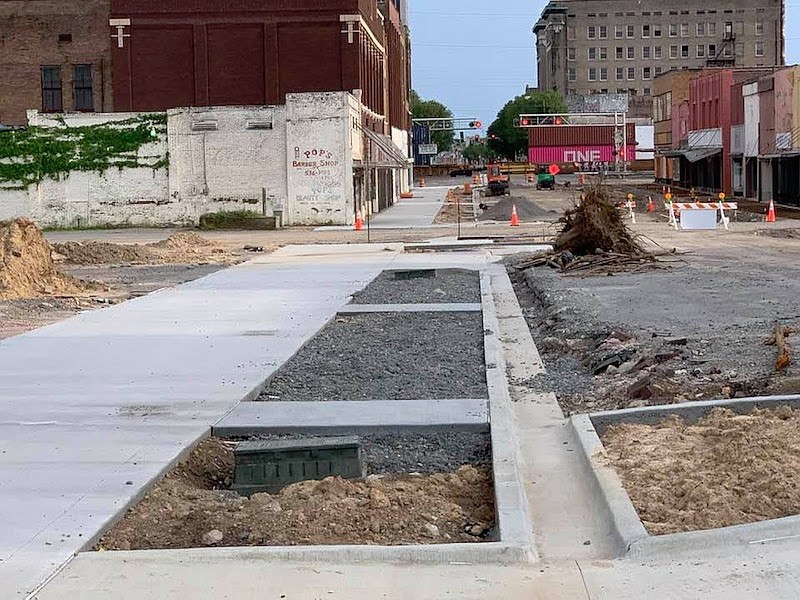 The initiatives of the City of Pine Bluff and Go Forward Pine Bluff are paying off as the city is beginning to see the reaping of their harvest.
Pine Bluff was often described in the media as a “war zone” and “the worst place to live in America” but through the support of local leaders and volunteers, the good about the community is outweighing the bad.
GFPB strategy for redeveloping, repurposing and revitalizing downtown Pine Bluff is transforming off the blue print into a visual delight.
According to a newsletter released by the organization, the Economic Development’s Pillar to establish The Generator (an innovation hub) and the Quality of Life’s Pillar Downtown Historical District initiative is looking promising for the future of the city.
“Although Streetscape has been in the works for several years, we finally see it become a reality,” said GFPB in their newsletter. “This project, as well as others by many organizations, is working towards making downtown the place to be.”
Funding for Streetscape comes from the Penny for Progress sales tax that was passed in 2011, as well as a $1M grant from the Arkansas Highway and Transportation Department.
GFPB and the Community and Economic Development Department teamed together to secure a $350K Delta Regional Authority Grant for additional funding and $2M from the City of Pine Bluff. The Arkansas State Highway Commission awarded $500K for the project in 2015.
Over $200K has been allocated for the construction of the 601 Main Street Plaza with the 2017 5/8th cent sales tax through the Pine Bluff Urban Renewal Agency.
Dr. Ryan Watley, CEO of Go Forward Pine Bluff, said last week that the Urban Renewal Agency was gearing up to remove blight from the community after efforts were stalled.
According to the newsletter, PBURA crews are on target to surpass all of last year’s demolitions by the end of the second quarter.
Watley has also proposed an updated First responder Incentive Program for 2020 that both the Chief of Police Kelvin Sergeant and Fire Chief Shauwn Howell, are in favor of.
A public private review committee established by Mayor Washington created a strategy to retain the quality and professionalism of the first responder force through effective recruiting, continuing education, and competitive salaries.
The first responder homebuyer assistance program would aid full time City of Pine Bluff uniform police and fire officers by making 0% interest loan up to $10,000 which could be used for any combination of down-payment and or interest reduction required by the lender along with additional cost associated with purchasing a home.
The funds can also be used for home improvement. New construction is also eligible. There is no limit to the price of the home that can be purchased as long as the home is within the City limits of Pine Bluff
First responders who are existing home owners are eligible for up to $5,000 (five thousand) in home repairs. Payment for home repairs will be subject to procurement laws and made directly to qualified licensed subcontractors.
According to the proposal, standard credit regulations would still apply to the housing incentive program. However, assistance would be available for non-automatic qualifiers through secondary market lenders and credit repair assistance.
Down payment, closing cost and or home repair loans will be structured in the form of a 0% interest five-year forgivable loan.
Public safety officers are required to serve as a uniform officer for five years for the loan to be forgiven. Voluntary resignation and/or termination before the five-year forgiveness period will result in repayment of the loan.
Wately said the intent of the program is to recruit first responders for the Pine Bluff Police and Fire Department so departments can fulfill their staffing needs.