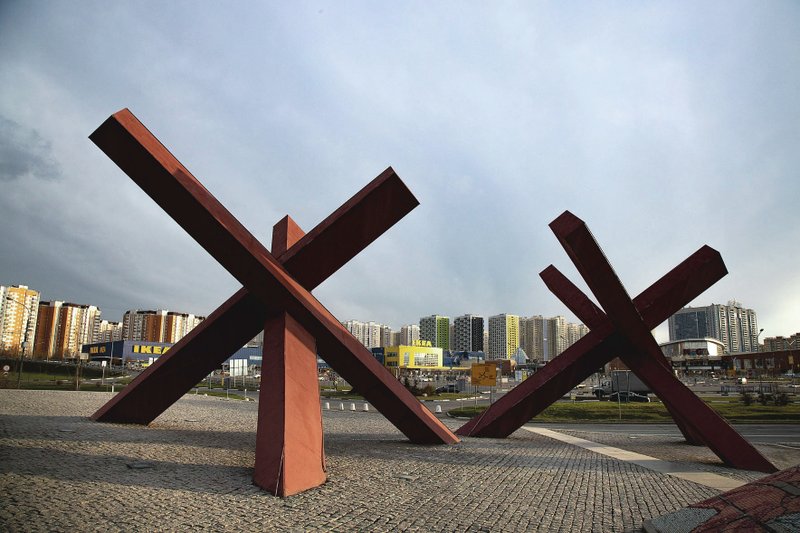 A World War II monument featuring giant anti-tank traps is seen April 30 on the outskirts of Moscow. The memorial often perplexes first-time visitors to the capital -- the steel beams resembling giant children's jacks set in the middle of the highway leading from Sheremetyevo Airport. They mark the approximate point of the closest advance of Nazi forces on the capital. (AP/Alexander Zemlianichenko)

MOSCOW -- Russians this year won't be able to mark Victory Day, the end of World War II in Europe, with the usual elaborate parades because of coronavirus restrictions . But they can turn their eyes to a remarkable array of war monuments.

The Soviet Union's suffering and valor in the war has become a fundamental piece of Russia's national identity, so much so that it's common for couples to to have their photos taken at a war memorial on their wedding day. Few Russians live far from a memorial, whether it's huge and demands attention or so modest that one can easily pass it without noticing.

The most striking is The Motherland Calls, Europe's tallest statue, a 278-foot figure of a sword-wielding woman soaring from a rise above the city of Volgograd - formerly named Stalingrad. It is the centerpiece of a memorial complex for the Battle of Stalingrad in which some 2 million people died before Soviet forces repulsed the Nazis.

Unlike the figurative display of Volgograd, some of St. Petersburg's memorials are words written large or small. Outside the main railway station, a huge sign on a building reads: "Hero City Leningrad," referring to the city's endurance in the 1941-44 siege, when it was named Leningrad.

Far down Nevsky Prospekt, the city's main avenue, a far smaller sign reminds passersby of some of the suffering that earned the title. A stenciled notice on a building reads: "Citizens! During artillery fire, this side of the street is more perilous." Such signs were common during the siege and this one is regularly repainted.

Like the stencil, one of Moscow's memorials is easy to miss. On a building on a sidestreet, a plinth well above eye level holds figures of boys killed after they quit school to fight.

Murmansk has a 116-foot soldier gazing from a hilltop over the frigid bay that received so many vital Allied supply convoys. A Magnitogorsk memorial shows a soldier and a steelworker holding a sword together, to honor those who fought and those who supplied them.

Perhaps the must puzzling memorial is in Moscow: the steel beams resembling giant children's jacks in the middle of the highway leading from Sheremetyevo Airport. They represent tank traps and mark the approximate point of the closest advance of Nazi forces on the capital.