This combination photo shows (from left) Jon Bon Jovi performing at the Samsung Charity Gala at Skylight Clarkson Square in New York on Nov. 2, 2017; Luke Combs performing at the 54th annual Academy of Country Music Awards in Las Vegas on April 7; and Avril Lavigne performing at the Paramount in Huntington, N.Y. on Dec.11, 2013. Bon Jovi, Combs and Lavigne are among the musical acts who have written songs about the coronavirus pandemic. (AP Photo)

NEW YORK — With masks over their mouths and gloves on their hands, country superstar Luke Combs and his band went to a music studio — in separate rooms — and recorded a new song reflecting the mood of a world dramatically altered by the spreading coronavirus.

Singing lyrics like "I miss my mom, I miss my dad," Combs performed "Six Feet Apart," a song he wrote on April 14 during a Zoom writing session with songwriters Brent Cobb and Rob Snyder.

"There was hardly anybody there. There were two guitar players, a bass player and a drummer and they were never even in the same room as I was," he said. "Just very surreal that we couldn't even say hello to each other."

"You don't think about how cool that stuff is to do until you don't get to do it anymore," Combs said.

More than 40 other tracks like it have been released in the time since covid-19 hit the United States in a big way in March. Most of the tracks are originals, like Combs' tune, although some artists have reworked older songs to make them relevant. Others have joined forces for all-star covers of songs to raise money for charities benefiting virus victims and first responders.

Bono, Bon Jovi, twenty one pilots, Pitbull, Randy Newman, OneRepublic, Lil TJay, Michael Bublé, Mike Campbell and Tye Tribbett are some of the acts who dropped original songs reflecting the current times. Latin R&B artist st. Pedro even penned a groovy track titled "Phone Sex" for those far away from their lovers, while country singer Adam Hambrick wrote a song about his wife, a physician's assistant working to test people for covid-19 and caring for patients who may have been affected.

Mike Love of the Beach Boys, who had to postpone 60-plus shows due to the virus, said he thought to himself while sitting at home: "What could I do musically to inject a little positivity in a situation which is primarily pretty restrictive and negative?"

Then he wrote "This Too Shall Pass," an upbeat, Beach Boys-flavored gem brimmed with positive messages that also gives a shout-out to doctors and nurses working on the front lines. All artist and label royalties from the song will go to Feeding America's Covid-19 Response Fund.

"I wanted to put a smile on a lot of faces," Love said. "I've been performing on the road for almost six decades, so I've seen lots of things come and go — the Vietnam War, civil unrest and all the things that we've gone through as a society. Even if they're really negative, they do pass."

Queen and Adam Lambert re-recorded the classic "We Are the Champions" and released "You Are the Champions" in support of health care workers. Gloria Estefan reworked her upbeat 1989 single "Get On Your Feet," calling the new version "Put Your Mask On!" And Todrick Hall transformed his dance anthem "Nails, Hair, Hips, Heels" into "Mask, Gloves, Soap, Scrubs," which features lyrics like "TikTok, GrubHub ... Zoom is the new club."

Avril Lavigne originally wrote last year's "Warrior" about her battle with Lyme disease. She changed its lyrics and re-recorded the song to honor front-line workers and titled it "We Are Warriors." All proceeds will go to Project HOPE's coronavirus relief efforts.

"It felt really good to go back in and perform it. It was really powerful. I had goosebumps. I kind of felt like I could cry," she said. "I was just ... picturing the nurses and the doctors in the hospital, everyone who [is putting] their lives at risk right now ... They are the true warriors. They're legit heroes right now."

Other acts, including the Rolling Stones and Norah Jones, have released previously written songs they felt resonated right now. Rodney "Darkchild" Jerkins — the Grammy-winning hitmaker who has worked with Whitney Houston, Michael Jackson and Brandy — even re-worked an unfinished 17-year-old song to create an all-star gospel anthem about the world coming together.

"I was like, 'It's not ready to put out. We can't just put it out just because it needs to happen at a time when the world really does need to come together,'" he said. "This was the moment. This was the time when God saw fit to where it needed to come out."

Jon Bon Jovi wrote "Do What You Can" after volunteering at his own community restaurant during the pandemic. He plans on including the track on his band's new album, Bon Jovi: 2020, and said music continues to heal and unite the world in times of tragedy. 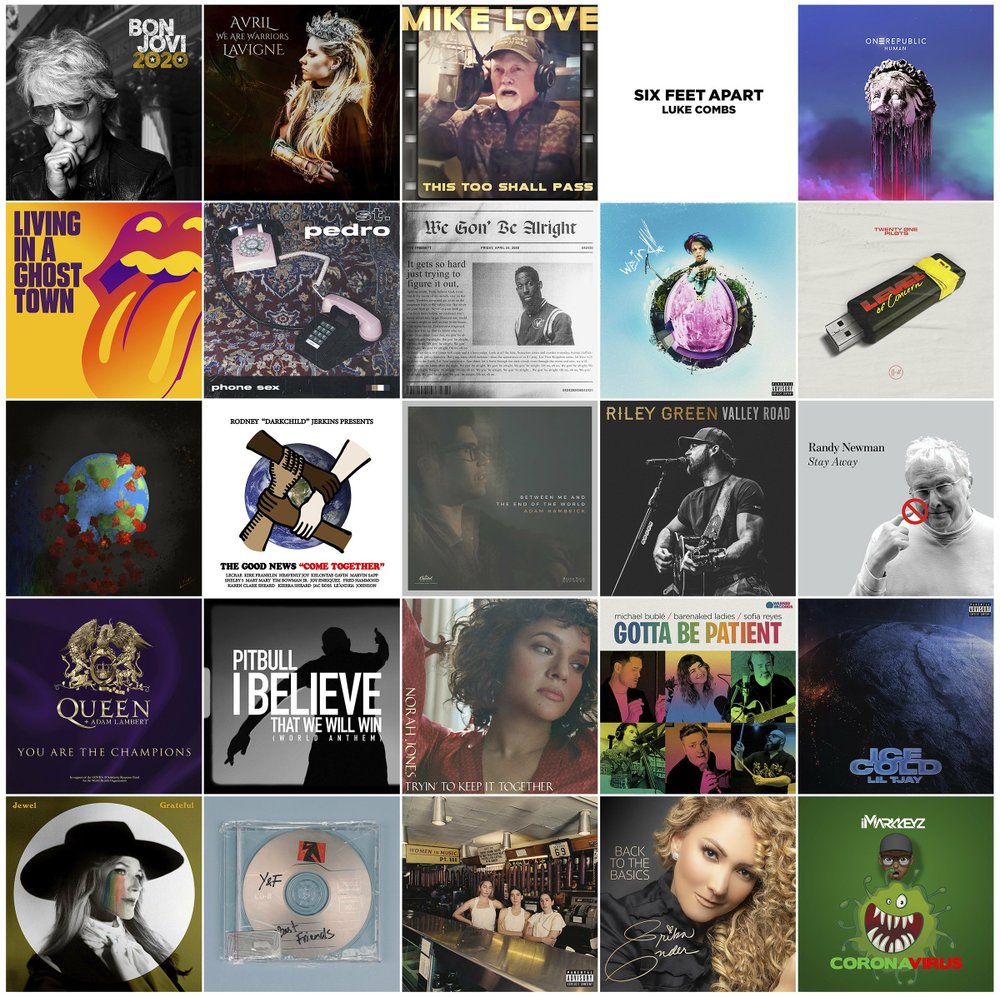 "Music knows no borders and it knows no political affiliation. Music brings people together," he said. "When people opened up their windows and started singing 'Living on a Prayer' in Chicago — they were trying to find that thread that brought them all together in these trying times. It was right in the first days of this pandemic. I saw it online and it was amazing because it was just healing and it didn't care if you were a White Sox fan or a Cubs fan, it was music to find that common thread."

"Music has always been that friend to me," he added. "It's proving to be a friend to so many in these trying times."

Here's a list of songs released in the last six weeks related to life in quarantine and social distancing. A playlist of the tracks is available on Spotify and Apple Music.

CREATED IN QUARANTINE: Songs exclusively written while homebound due to the spread of covid-19.

REMIXED: Songs that have been re-recorded or remixed to reflect the mood of the world overtaken by the coronavirus.

PRE-PANDEMIC: Songs written before the virus spread but released because the tracks resonate with the current times.