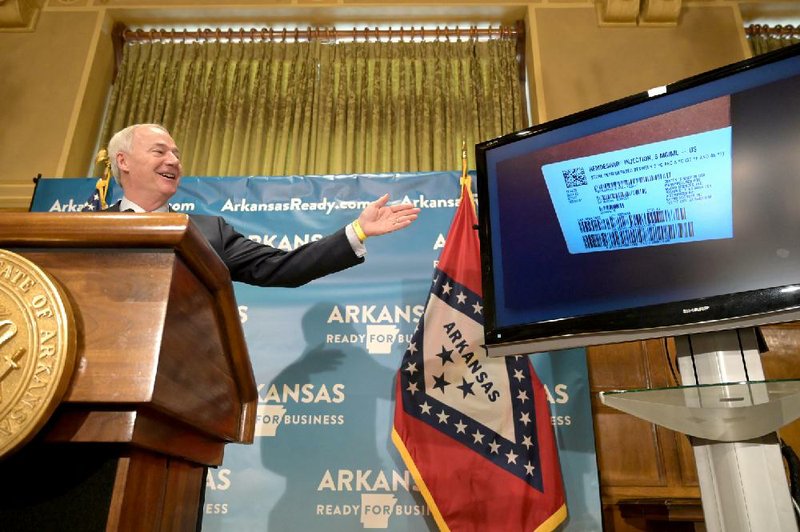 During his briefing Tuesday, Gov. Asa Hutchinson shows an image of a shipment of remdesivir, which has been given emergency approval for use in acute cases of covid-19. Hutchinson said the state had received enough of the drug for 50 patients. More photos at arkansasonline.com/513gov/. (Arkansas Democrat-Gazette/Stephen Swofford)

Arkansas' tally of coronavirus cases rose by 121 between Monday afternoon and Tuesday afternoon, including 100 infections that weren't of prison inmates.

The one-day increase in noninmate cases was the state's largest since the first patient in the state was diagnosed with the virus on March 11.

It included at least 27 cases among residents of St. Francis County, where an outbreak at the federal prison complex in Forrest City has led to infections among 332 inmates and at least 17 staff members.

Gov. Asa Hutchinson blamed the uptick in the area on a poor federal response to the prison outbreak.

[Video not showing up above? Click here to watch » https://www.youtube.com/watch?v=ihkZvYVr_XE]

He called the one-day increase "worrisome because of [the] number in the community and the fact that we had 27 of those in St. Francis County."

"I want to make sure that everyone there in Forrest City knows the importance of sticking with our social guidelines and distancing and wearing of masks for their own protection and the protection of others, because we don't want this spike to become larger," he said. "So that's something we're watching very closely."

Representatives of the Federal Correctional Complex and U.S. Centers for Disease Control and Prevention, which is in charge of the response to the outbreak at the prison, didn't respond to messages from the Arkansas Democrat-Gazette on Tuesday.

At his daily news conference on the pandemic, Hutchinson also said he will announce a decision Monday about when bars may be allowed to reopen and on May 20 about when summer camps and team sports may be allowed.

He said the state also received an allotment from the CDC of remdesivir, which the U.S. Food and Drug Administration has approved on an emergency basis for use on patients hospitalized with covid-19.

Nate Smith, secretary of the state Department of Health, said the shipment is enough to treat 50 patients.

The state has 52 patients who could meet the criteria to be given the drug, he said. He said the drug is not recommended for patients with severe kidney or liver disease.

"It's not a miracle drug, but we're glad to have some donated supply in Arkansas," he said.

He said the drug will be distributed to hospitals "to be used as quickly as possible."

One additional death from the virus was reported, raising the state's death toll to 95.

The number of Arkansans who were hospitalized with the virus fell by two, to 59, while the number on ventilators increased by one, to 12.

Hutchinson said he didn't think the increase in cases stemmed from the state's relaxation of some of the restrictions that were imposed to slow the spread of the coronavirus.

Instead, he called it "a result of inadequate testing that was done at the [Federal Correctional Institution], and in terms of particularly the staff."

He compared the federal response to Arkansas' handling of the outbreak at a state prison, the Cummins Unit in Lincoln County.

Smith said Tuesday that three more inmates at Cummins had tested positive, raising the number of infections among inmates to 900.

The deaths of seven state inmates there have been linked to the virus, which also has infected at least 60 staff members.

"At Cummins, we went down there and we tested all the staff that might have been exposed at those particular barracks," Hutchinson said. "Not all the same procedures were followed at [the federal prison] in Forrest City, and therefore you have a lot of contact with the staff with the community, and that's what we're concerned about, and that's what we see as the reason for that spike in St. Francis County."

Smith said the CDC has offered on-site testing for employees at the federal prison, "but the vast majority have not been tested."

The new cases were found after the Health Department and the University of Arkansas for Medical Sciences set up a temporary testing site at the Forrest City Civic Center on Saturday.

UAMS spokesman Leslie Taylor said the Health Department collected specimens from prison employees and their family members and UAMS tested others from the community.

The hospital screened about 150 patients and took testing samples from about half of them, she said. She said the results from the hospitals' samples weren't available Tuesday.

No one answered the phone at the plant on Tuesday evening, but a recorded message said it would be closed until May 26.

The Health Department will offer testing at the civic center again from 9 a.m. to 4 p.m. Saturday.

Williams said Hutchinson and Smith told him the first 500 people who show up will be tested regardless of whether they have symptoms.

"In our particular city, as some of the different businesses are opening back up, it's good that we take advantage of the testing just to see exactly how widespread it is, not just in Forrest City but the St. Francis County area in general," Williams said in a phone interview.

Smith said Forrest City "is a community that I'm concerned about," and he urged employees at the federal prison to be tested through their health care provider or at a community testing event.

He said the state recently received a "large number" of kits from the CDC, with nasal swabs and material needed to deliver specimens.

"We've got plenty of collection kits," he said. "We've got the testing capacity. What we needed is people in the community to come forward.

"If you have symptoms, if you've been exposed or you're in a community where we've had some activity, we want people to come forward and get tested."

He said he had heard about a high school graduation party in Forrest City that had been planned for Friday evening.

"That probably isn't a good idea in a community where we know we have now community transmission of covid-19 at higher levels than in many other communities," he said.

Williams said a flier had been distributed for the party by some high school students who planned to rent out a venue.

The event is "not going to happen," he said.

"Once we tracked it down to the owner, there was miscommunication," he said. "There was not any event. Some people jumped the gun."

With 12 new cases, Pulaski County had the next-highest share of the 100 new cases among non-inmates, raising its total to 640.

No other county had an increase larger than six or seven cases, Smith said.

A United Methodist pastor is among the Arkansans who have died of the virus most recently.

The Moyers, who were treated when they had coughs in early March, developed worsening symptoms and were tested March 25 for the virus.

Both were admitted to the Conway hospital on March 27, the day their test results came back positive. At the time he was admitted, Norman Moyer was being treated for bronchitis, his wife said.

Bonda was released from the hospital three days later and experienced exhaustion for two to three weeks afterward before recovering; Norman, who never left the hospital, had been on a ventilator since April 1.

Norman, who last served as a pastor around 12 years ago, was on honorable location, a category in the United Methodist church in which a member keeps his or her clergy credentials while becoming a member of an area church instead of the denomination's larger governing body.

Bonda is a former pastor and former district superintendent for the Arkansas Conference of the United Methodist Church, and for years Norman had assisted as needed with tasks an associate pastor in the faith would take part in, including giving children's sermons, and assisting with Holy Communion.

"Norm was a faithful United Methodist minister with an artist's soul, who was able to touch people deep in their souls," said Arkansas Conference Bishop Gary Mueller in an email Tuesday. "The way he fought his battle with Covid bravely and faithfully over many weeks witnesses to his deep faith in God's grace. He now is part of the Church Triumphant."

A Health Department report indicated a resident at Allay Health and Rehab in Little Rock also died from the virus, raising the virus death toll among nursing-home and assisted-living facility residents to 38.

Including those who have died, the number of nursing-home residents who have tested positive increased by 11, to 337. Infections among workers at the facilities increased by two, to 174.

Statewide, the number of patients in the state who were considered to have recovered increased by 71, to 3,220.

The number of active cases, meaning the person tested positive and has not died or recovered, increased by 46, to 849.

Information for this article was contributed by Francisca Jones and Joseph Flaherty of the Arkansas Democrat-Gazette.