DHs likely limbering up for NL 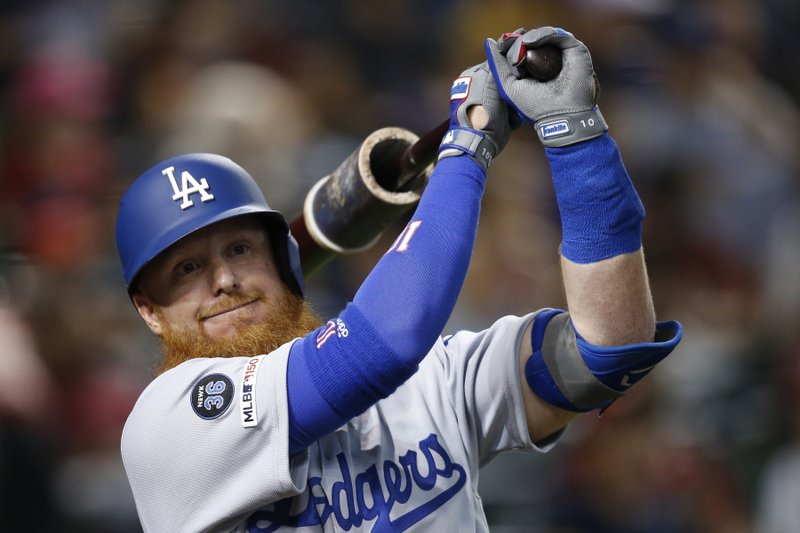 FILE - In this Aug. 29, 2019, file photo, Los Angeles Dodgers' Justin Turner warms up as he waits to bat against the Arizona Diamondbacks during the third inning of a baseball game in Phoenix. Turner is among older players who might see time at designated hitter if the National League uses it this season. (AP Photo/Ross D. Franklin, File)

Before all the self-proclaimed purists forecasting the destruction of baseball strategy and the very sanctity of the sport as we know it go berserk bemoaning the inclusion of a designated hitter in the National League this season, remember this:

In a most remarkable October full of huge momentum swings, the pivotal blow that decided last year's World Series was delivered by, yep, the NL DH.

OK, that clang resonating off the right field foul screen at Minute Maid Park -- courtesy of Howie Kendrick's home run in Game 7 for the visiting Washington Nationals -- probably won't drown out the wailing of longtime National League fans over the plan to play this virus-delayed season with a (gasp!) DH in both circuits.

And it certainly won't quell the debate that's raged since April 6, 1973, when Ron Blomberg of the New York Yankees stepped to the plate at Fenway Park as Major League Baseball's first DH (and drew a bases-loaded walk from Luis Tiant).

To many NL fans, the simple scribble of "DH" on the lineup card sullies the whole stadium. To lots of American League fans, the mere sight of a pitcher touching a Louisville Slugger is a total affront to the diamond. 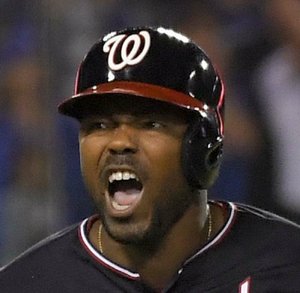 Photo by AP
Washington Nationals' Howie Kendrick celebrates after a grand slam against the Los Angeles Dodgers during the 10th inning in Game 5 of a baseball National League Division Series on Wednesday, Oct. 9, 2019, in Los Angeles. (AP Photo/Mark J. Terrill)

No matter, that's part of the proposal MLB owners are making to players -- a full-time DH in the National League, same as the AL. This season, only.

Jim Riggleman has managed and coached in each league and seen both sides.

"During this abbreviated season I'm OK with it," he wrote in an email Monday.

"In general, I think the NL game is a much better game. The pitcher's AB is not the point. It's all the ramifications that the pitcher hitting has on the strategy of the game. More interesting game and tougher game to manage with pitcher hitting," he said.

With that, let's take a meaty cut at what this might mean as NL DHs get limber with the lumber:

Kyle Schwarber (Cubs), Nick Castellanos (Reds) and Dominic Smith (Mets) made it to the majors with their bats, not gloves. They'd be natural fits.

Christian Yelich (Brewers), Yoenis Cespedes (Mets) and Hunter Pence (Giants) are coming off injuries. The DH spot would give them a break from the daily grind.

Kevin Cron (Diamondbacks) hit 38 home runs in Class AAA and six more for Arizona. With first baseman Christian Walker coming off a breakout season, Cron could have a new slot.

Justin Turner (Dodgers), Ryan Braun (Brewers) and Jay Bruce (Phillies) are among older players who might see time there. The Nationals (Ryan Zimmerman, Starlin Castro, Eric Thames and Kendrick) and the Rockies (Daniel Murphy and Ian Desmond) could rotate. Nick Markakis and Adam Duvall would benefit in a crowded Braves outfield.

Max Scherzer, Masahiro Tanaka and Adam Wainwright are among the aces in recent years to be injured either batting or running the bases. With a stop-and-go spring training and a desire to ramp up quickly to regular-season speed, no one wants to see pitchers get sidelined doing something besides throwing.

Who does this rule hurt? Start with Madison Bumgarner, the power-hitting pitcher who signed with Arizona. He loves to hit and once toyed with entering the All-Star Home Run Derby. The Diamondbacks would probably rather put up someone paid to bat.

Jacob deGrom, Clayton Kershaw and Stephen Strasburg likely will keep excelling. But their ERAs are likely to take a hit as those NL lineups will look a little more imposing.

Sonny Gray (Reds), Sandy Alcantara (Marlins) and Chris Paddack (Padres) all start for teams that struggle to score runs. With the DH, managers might let them stay in longer, instead of pulling them for a pinch-hitter.

Yasiel Puig doesn't have a team. He combined for 24 home runs and 84 RBI with Cincinnati and Cleveland last year and remains a free agent.

Matt Adams (Mets), Logan Morrison (Brewers) and Greg Bird (Rangers) signed minor-league deals in the offseason and, if they prove they've still got pop, could be low-priced options. NL rosters were pretty full when the shutdown came in March, but now there figures to be rejiggering.

For every entertaining home run trot by the likes of a Bartolo Colon, don't forget: Pitchers hit a whopping .128 overall last year. NL twirlers were better at the dish -- they hit .131, while their AL counterparts flailed at .087.

There aren't many like Shohei Ohtani out there. Nelson Cruz, Edwin Encarnacion, J.D. Martinez and Miguel Cabrera are easy DH fits in the AL. The NL side will be more of a scramble.

With extra playoff teams, no doubt guys like Jorge Soler, Daniel Vogelbach and Corey Dickerson could become trade targets come October or whenever the deal deadline is set.

The move to NL DHs will surely wind up sacrificing one part of the game that traditionalists love to tout: bunting.

NL teams put down an average of 35 sacrifice bunts last season, led by the Dodgers with a majors-high 55 (they also led the NL with 279 home runs). AL teams averaged just 16, and the Angels had the fewest with only four.

Pitchers bunt the most -- when they disappear from the plate, so will a big piece of strategy that's been around forever.