Despite leeriness, Trump campaign promotes, prepares for voting option by NICHOLAS RICCARDI The Associated Press | May 13, 2020 at 3:15 a.m. 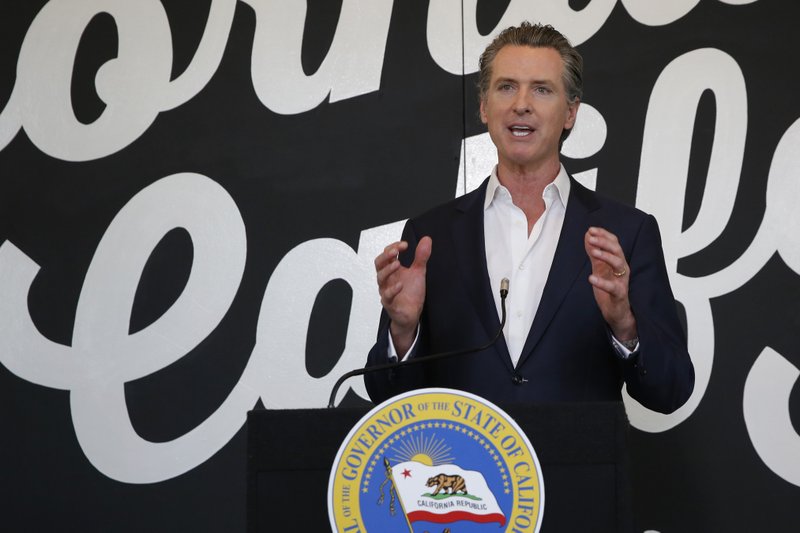 FILE - In this May 5, 2020 file photo, California Gov. Gavin Newsom discusses his plan for the gradual reopening of California businesses during a news conference at the Display California store in Sacramento, Calif. While President Donald Trump claims mail-in voting is ripe for fraud and &#x201c;cheaters,&#x201d; his reelection campaign and state allies are scrambling to launch operations meant to help their voters cast ballots in the mail. Newsom, a Democrat, has announced that the state&#x2019;s 20.6 million voters will be mailed ballots before Election Day. (AP Photo/Rich Pedroncelli, Pool, File)

While President Donald Trump says mail-in voting is ripe for fraud and "cheaters," his reelection campaign and state allies are scrambling to begin operations meant to help their voters cast ballots in the mail.

Through its partnership with the Republican National Committee, Trump's campaign is training volunteers on the ins and outs of mail-in and absentee voting, and sending supporters texts and emails reminding them to send in their ballots.

In Wisconsin, where a special congressional election was held Tuesday, the Trump campaign last week sent a reminder via Twitter: "Request an absentee ballot by 5 pm TONIGHT."

The Trump campaign continues to promote mail voting options, even as it casts doubt on some of the ways it is practiced. The campaign says it specifically draws a line at all-mail elections, where every voter automatically receives a ballot. That practice is "an invitation for fraud," campaign spokesman Tim Murtaugh contended in a statement.

"While we strongly disagree with the ill-intended Democrat push for more mail-in ballots, we have an obligation to our voters to inform them of what the law is in their state and what their options are," Murtaugh said.

Democrats ran a robust absentee ballot operation in last month's statewide election in Wisconsin, winning a contested Supreme Court race. The party is now looking to replicate its operations in a series of June primaries with an eye on November.

But battleground Wisconsin has been the center of the debate. The Republican-controlled legislature blocked a late attempt to switch last month's election to an all-absentee ballot contest, sparking long lines as voters waited to get into the few polling stations that could remain open in heavily Democratic Milwaukee and other cities.

The discrepancy alarms some Republicans.

"Knowing that everyone in Milwaukee is going to get a ballot, but not everyone in Brookfield is, that's a significant disadvantage," said Stephan Thompson, a veteran GOP operative, referring to a bedrock Republican suburb of Milwaukee.

A similar dynamic is playing out in Pennsylvania. Democratic-dominated Allegheny County, centered on Pittsburgh, is sending absentee requests to all of its voters for next month's primary. Republican-leaning counties haven't taken similar steps -- though the state party and its partnership with the RNC have been urging GOP voters to use absentee ballots in the primary.

Still, when the state party urged its voters on Facebook to use mail ballots, it was deluged with angry comments about enabling voter fraud.

"We have to be careful that we're not so critical of the process that, if that process is in place, we're potentially suppressing our own vote," warned John Brabender, a Pennsylvania-based GOP strategist running several races in states that have shifted to mail.

In Tennessee, fear of contracting the coronavirus doesn't meet the criteria to vote by mail due to illness, state officials said Tuesday, as they recommended preparing as though all 1.4 million registered voters who are at least 60 will cast ballots by mail in the August primary election.

The guidance comes after the release of Tennessee's covid-19 election contingency plan, which was prepared by the state Division of Elections, dated April 23, and provided this week to the AP.

The plan doesn't contemplate a shift to allow all voters to cast ballots by mail due to fears of contracting or unknowingly spreading covid-19 at the polls. Republican Secretary of State Tre Hargett has contended that would be a huge change in a short time frame for a state accustomed to voting in person.

Information for this article was contributed by Scott Bauer, Adrian Sainz and Jonathan Mattise of The Associated Press.